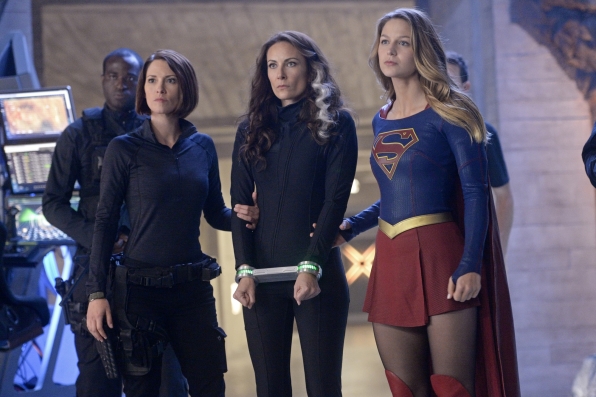 After having spent the past four days at Disney World, I was excited to return to the real world and my regularly scheduled programming. Around the same time that I was watching fireworks set to John William’s Star Wars score at Hollywood Studios, Supergirl returned for its midseason premiere; and let me tell you, the fireworks were way better.

While the midseason finale was the show’s best episode yet, this week’s episode fell flat in comparison. Though it certainly wasn’t the worst episode for Supergirl, it felt as if much of the suspense that had been set up during the finale was undone by this Monday’s episode.

It seemed to me that after having spent much of the finale building up Astra’s capture and interrogation, the writers should have waited a little longer before they ultimately freed her to create more conflict again. I understand that she’s one of the show’s biggest antagonists, and that means she couldn’t stay locked up forever, but it seemed careless to release her so quickly.

Another thing that the writers seemed too eager to reverse was Cat’s suspicion that Kara was Supergirl. It made sense to have Cat, who is written to be incredibly intelligent, be one of the first to figure it out for themselves; not to mention it could have forged the way for plenty more adorable motherly scenes between Cat and Kara, which we all know are the best scenes. One thing that wasn’t expected from this revelation, however, was Cat’s bizarre ultimatum that Kara either reveal herself as Supergirl or quit.

Cat’s reasoning was that clearly Kara didn’t care enough about her job if she also had the time to be Supergirl, which was honestly a fair point. A superhero really shouldn’t have to balance their time between saving lives and working to maintain their secret identity, especially given that Kara left three times during that particular workday for Supergirl related activities.

Of course, we ended up not even having to worry about the ultimatum, because Kara quickly found her way out of that situation by enlisting J’onn J’onzz to play her doppleganger. So, not only did the writers completely backtrack on the storyline that brought us to the ultimatum, but they took that back as well. Which truly is a shame, because for Cat to realistically be as intelligent as the writers portray her to be, she needed to discover Supergirl’s identity out eventually.

That’s not to say that neither of these storylines didn’t also have some redeeming qualities to them. Melissa Benoist is often the highlight of the show and this episode we got a double dose. Seeing Kara pretend to interact with Supergirl was definitely my favorite part of the episode because Benoist was quite literally twice as adorable than usual.

And despite the short time that was spent on fleshing out Astra’s capture, it was interesting while it lasted to see how similar Astra and Kara truly are. Though they have their different beliefs and morals, Kara and Astra are both strong willed and care deeply. And while they typically express it in different ways, it’s possible that even Kara is beginning to see that she isn’t too far off from becoming much more like her aunt. Now that Kara realizes this it will become even harder for either one of them to truly see one another as solely enemies.

I do have one more bone to pick, however, with Astra. Although I initially loved Supergirl’s use of monster-of-the-week episodes, lately it has seemed that the writers are juggling too many villains and antagonists. First we had Astra, and now we can officially add Maxwell Lord to the list. And of course we still have the weekly monsters on top of all that. I feel that if they want to keep the week-by-week storylines in order to bring in as many possible comic book references, they need to drop their big bad back down from two to one. And quite honestly, right now I’m more interested in Max’s storyline than Astra’s.

At the very end of this week’s episode it gets revealed that Max’s big secret is that he’s built (or found?) Bizarro-Girl, Supergirl’s antithesis. I hope that through all of the other conflicts going on in this show Bizarro-Girl gets some decent screen time, because as of right now J’onn J’onzz hasn’t seemed to get his fill of his. Hopefully now that he’s revealed his identity to Kara that’s about to change.

I really wish that Supergirl had kicked off its midseason return much stronger, but as we’ve seen before the writers can do some really great stuff, so I’m sure that next week we’ll see that quality return.