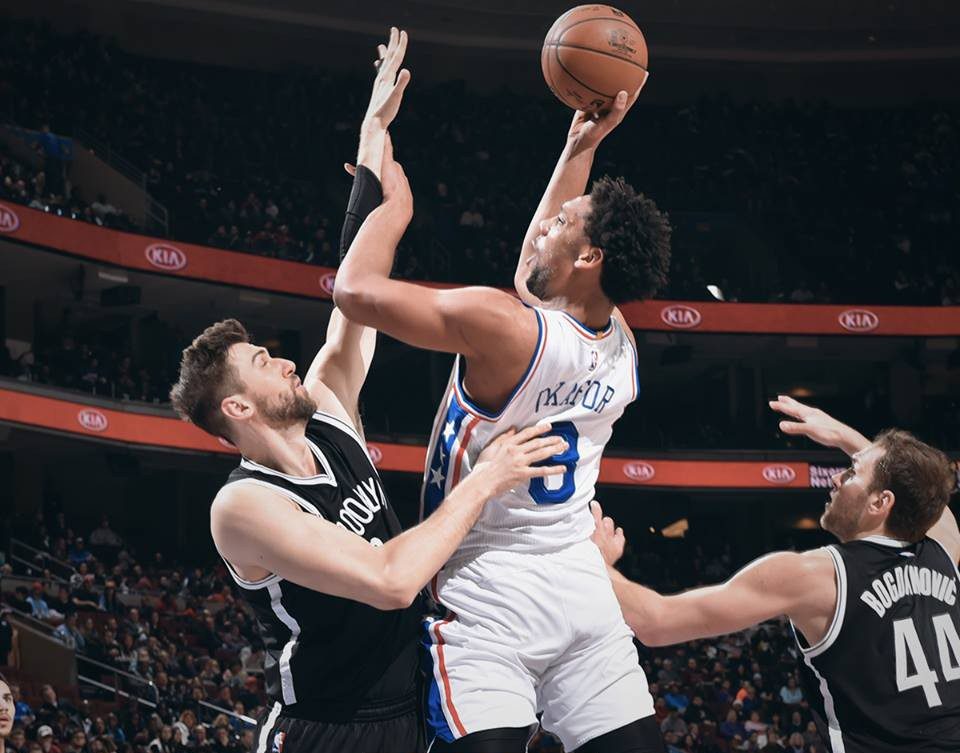 On a night dedicated to the bravado, flamboyancy and larger than life persona that was Darryl Dawkins, it was only right that the Sixers and Nets, the two teams in which Dawkins starred on, played in what was a down to the wire, highlight infested battle decided by grit and grind. As “Chocolate Thunder”, sporting his famous hoop earrings and rocking a flashy, eye popping three-piece suit, watched from the heavens above, the Sixers were able to turn water into wine with their defense, which blocked six shots and forced Brooklyn into 11 turnovers in the opening period as Philadelphia held a comfortable 12 point advantage (24-12) heading into the 2nd. Playing fast and moving the ball with confidence, the Sixers, playing without Ish Smith (sprained ankle), would bump their lead to as many as 15 points in the opening half and looked poised to run away with the blowout victory, until a pair of Nets hot streaks helped Brooklyn inch their way back into contention. Trailing 34-21 with 6:36 remaining in the 2nd, the Nets used timely shooting performances from athletic swingmen Wayne Ellington and Markel Brown to help trigger a 9-0 run, followed by a 7-0 run at the end of the half to cut a once double digit deficit down to two points (41-39) at intermission. The Sixers, who scored 24 points on 47.6% (10-21 FG) shooting in the 1st quarter, struggled to find their range in the 2nd; scoring just 17 points on 29.4% (5-17 FG) as they were outscored by 10 in the quarter. Nerlens Noel led Philadelphia with eight points, followed by Jahlil Okafor and Isaiah Canaan who chipped in six apiece. On Brooklyn’s end of the floor, Ellington was the high point man for the Nets with nine, while Brook Lopez and Markel Brown added eight and seven points respectively.

Out of the break, the Nets offense had little problem picking up where they had left off. After going scoreless in the first half, former Sixer, Thaddeus Young teamed up with Brook Lopez to score the first 15 points of the 3rd quarter; giving the Nets their first lead since the early minutes of the opening period. The Sixers, though, would not be deterred. Just like Mr. Dawkins did 30 years before, Philadelphia continued to aggressively attack the rim for easy buckets down low. Continuously taking it into their hearts of Brooklyn’s defenders, the Sixers went on a 10-0 run and used a big three-point basket from Jerami Grant in the closing seconds of the 3rd to give Philly a five point lead (69-64) heading into the final period of play. In the 4th, the score would continue to flip flop back and forth as neither team was willing to give much of an edge. With the Sixers trailing 96-93 with a little over a minute left in regulation, T.J. McConnell was fouled by Brooklyn’s Donald Sloan; sending T.J. to the free throw line with a chance to bring the score within one. McConnell, only a 60.7% (17-28) free throw shooter on the season, knocked down his first, but missed the second. Okafor, though, adding to what was already a monstrous second half, was able to secure the offensive rebound and kicked it back out to McConnell who then found Robert Covington for a step in three-pointer that gave the Sixers a 97-96 advantage; a lead in which Philadelphia would hold on to for good. In the final 30 seconds of the game, T.J. came up with two huge steals, one from Thaddeus Young, which led to a wide open dunk by Nerlens Noel, and the other from Shane Larkin with 5.9 seconds on the clock that iced the game for good. When the final buzzer sounded, the Sixers had escaped 103-98 for their eighth victory of the season.

Okafor, coming off of a pedestrian nine point performance against the Wizards the night before, feasted on Brooklyn’s big men; scoring 22 points (9-16 FG) and pulling down 17 boards in 33 minutes of action. His frontcourt mate, Nerlens Noel, scored 18 (8-11 FG), followed by T.J. McConnell who added 17 (7-10 FG) and Hollis Thompson who chipped in 14 (4-9 FG). After the game, Brett Brown was ecstatic about not only the win, but the physicality and activity of the Sixers defense, which blocked eight shots, registered 12 steals and forced the Nets into committing 19 turnovers. “I thought that we played excellent defense. I thought that if it had not been for the turnovers in the first half that we could have been up by more. I feel that there was a spirit and feistiness in how we played,” Brown said. “We played within a pace that we want to play with, even though Ish wasn’t in the game. I think there was a lot of team stuff going on; a lot of physical stuff going on. The word that has been flying around our locker room lately has been ‘competitiveness’ and I think the competitiveness that we showed tonight was for four periods, whereas, last night [against the Wizards] it was only for three quarters.”

Paying Homage to a Fallen Legend
Known for his backboard shattering dunks, fun loving personality and for having a heart of gold, Darryl Dawkins was class personified; an ambassador of the game whose influence in the sport expanded continents away with the work he did with NBA Cares and Basketball without Borders. To commemorate Dawkins’ life, fans were given double-sided Chocolate Thunder posters and were treated to a special halftime ceremony featuring Sixers legends, World B. Free and Bobby Jones, who spoke of their brotherly relationships they had with the man who teammates referred to as “Double D.” “He was beautiful. He was kind hearted. He loved his kids. He loved his family,” said Free. “I’m starting to get emotional right now and I’m not trying to do that. I love him and I’ll always miss him.” After the ceremony, Dawkins’ family joined Free and Jones at center court where they were presented with a framed jersey and given a standing ovation from the nearly 19,000 fans in attendance. Dawkins was selected fifth overall by the 76ers in 1975 NBA Draft. Rocking the famous number 53, Darryl played seven seasons in Philadelphia; averaging 11.2 points and 6.7 rebounds in 448 games in a Sixers uniform. After retiring from the NBA in 1989, Dawkins played briefly for the Harlem Globetrotters and had a few coaching stints in the minor leagues before devoting his life to impacting those less fortunate.

The Unsung Hero
Taking the court without their floor general, Ish Smith, who suffered an ankle sprain in the Sixers 12 point loss to the Washington Wizards on Friday night; Philadelphia called upon a 6’1, undrafted rookie out of Arizona to help save the day. In 28 minutes, T.J. McConnell, making his first start since December 13th, tied a career high with 17 points, six assists and two crucial steals in the final seconds of the game, which helped the Sixers close out the Nets once and for all. Brett Brown, who has commended McConnell in the past for his work ethic, toughness and basketball, spoke highly of his rookie point guard after the game. “Wow. He was just all over the place. He just disrupts so much [for the other team]; just picking up a ball carrier, whether he’s blowing up a dribble hand off or getting his hands on something in traffic,” Brown said. “He was all over the place. He was inspirational. He ends up with 17 points and six assists. As a team, we only had six assists in the second half. We did a great job and I thought that he was a big part in what we did tonight.” In the Sixers loss to the Nets on December 10th, McConnell, again, scored 17 points on 3-4 shooting from downtown in 24 minutes off the bench. “T.J. McConnell has hurt us in the past, so there was no reason to think they wouldn’t come out and ball and play hard,” said Tony Brown, Brooklyn’s interim head coach. “I’m sorry Ish got hurt, but I think T.J. did a pretty good job.”

Thaddeus Not So Young
Thaddeus is 27 years old now; much older, much smarter and much more polished than when he first stepped foot in Philadelphia as a 19 year old rookie out of Georgia Tech. Despite going scoreless in the first two quarters, Young was phenomenal in the second half; scoring 14 points on 7-8 shooting in the 3rd quarter and finishing with 22 points (10-15 FG), 10 rebounds and three assists in 39 minutes. After the game, he was complimentary of the team that he spent the first seven years of his NBA career with, saying, “They just made a few extra plays, while we as a team made a few bone headed plays by turning the ball over. It’s tough, but that’s life in the NBA. It happens. The Sixers have been notorious for beating teams on any given night.” Playing power forward for the undersized Nets this season, Young is averaging 15.1 points and a career high 9.1 rebounds per game.

Game Notes
• With Ish Smith sidelined, Kendall Marshall received extended minutes (over 10) for the first time since January 7th. Playing with the second unit, Marshall struggled; scoring four points, dishing out three assists and committing five turnovers in 20 minutes.
• After committing 11 turnovers in the opening quarter, the Nets committed only eight the rest of the game. This season, Brooklyn ranks tenth in the NBA with 14.5 turnovers per game.
• Markel Brown’s 15 points (5-5 FG) is a season high. Brown, a second year guard out of Oklahoma State, is averaging just 2.9 points and 1.2 rebounds for the season.
• Joe Johnson, a seven time NBA all-star, was limited to just nine points (2-8 FG) and zero rebounds.