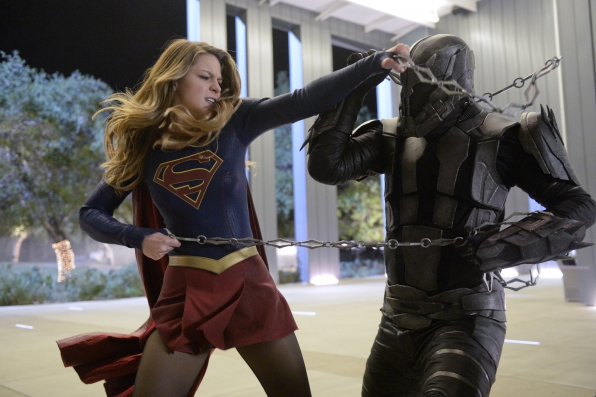 While Supergirl often tries to parallel its numerous storylines it squeezes into an episode by having an overlapping theme, this week’s episode succeeded in ways it hadn’t in the past. This week’s theme was ethics, which is easy enough to relate to on a show concerned with journalism and crime fighting. But more than that, this week’s episode of Supergirl was so successful because of how interesting each of the storylines were – well, for the most part, but we’ll talk about this later.

Ethics gets brought up pretty early on when Cat assigns James to do some investigative reporting on her suspected kidnapping of Maxwell Lord, who has yet to comment on a scandal facing his company. Problem is, as James says, he knows where Lord is, being held illegally and against his will by the DEO. He implores Kara to do the right thing and let him go, but just like before she refuses.

I’m still a little fuzzy how this is still being allowed, and how not one of his various employees haven’t reported him as missing yet. Oh, and for that matter, how Cat just randomly guessed the reason for his disappearance correctly before any of his employees realized it for themselves. But that’s not the point of this storyline, the point is that Kara needs to learn for herself to do the right thing.

Unfortunately for Kara, not even secondhand ethics lessons from Queen Mother Cat Grant can change her mind. No, the only thing that changes her mind is a run in with another alien with a fuzzy concept of what doing the right thing means.

Supergirl‘s monster this week is the Master Jailer, who’s been undetectably running around National City chopping off the heads of “weird” people, aka aliens. In his own brand of justice the Master Jailer is bringing judgment upon the escaped prisoners of Fort Rozz. Problem is, not all of the prisoners really deserve to be executed for their crimes – well actually none of them do, according to Henshaw and Kara, but really, how much longer do they have until all their jail cells fill up? Especially if they keep illegally holding people in them?

But the professor who smuggled drugs to pay for one of his wives’ medical bills and got caught on his first run (a tragic and well-known ethical dilemma) definitely does not deserve to face the guillotine. After some sloppy police work on Alex’s part, Kara and the professor are finally rescued and Kara decides that not all crimes are black and white and sets the ex-con professor free.

I’m not quite sure if it’s this realization, or James’ dreamy eyes that ultimately convince Kara to let Maxwell Lord go, but she begrudgingly does so at the end of the episode. While I’m completely bored of Maxwell Lord, and could quite honestly care less if he spends the rest of his life in that cell where we never have to see him again, I’d say that Kara did the right thing. Hopefully the promise of mutually assured destruction convinces Max to also do the right thing and keep his mouth shut.

There were a few smaller conflicts with ethics and morality during this episode of Supergirl. In one James finally decides that he can’t lie to Lucy anymore about Kara’s secret identity – if James thought Lucy used to be jealous of his and Superman’s bromance, he’s in for a rude awakening when he finally tells her about Kara.

Another conflict arose between Alex and Hank/J’onn as they argued whether they should tell Kara the truth about who actually killed Astra. While I agree that telling Kara would cause her to lose Alex as well, it’s really hard to see Hank react like a dad who’s daughter just told him she hates him. But that’s what makes morality so hard, having to decide which is the right thing to do when there is no right thing to do.

But of course no episode of Supergirl is complete without a few Cat Grant appearances, and Cat isn’t the type to be relegated to a single scene in which she gives James advice as he drinks at work again (seriously, this isn’t Mad Men, James). As is to be expected Cat is still pissed at Kara, so she decides to get revenge by hiring a new assistant, which effectively makes Kara number two.

Siobhan Smythe – whose name Cat can actually pronounce correctly and made for Kara’s funniest line this episode – is not only here to get between Cat and Kara, but also plans to become the next Cat Grant. Supergirl comic readers, however, will know that what she actually becomes is the villain Silver Banshee (I knew I didn’t like her from the moment I wrote “ugh, die” in my notes).

I’m excited that after rushing Livewire and Bizarro-Girl’s introductions, they’re actually giving time for this new villain to breathe and slowly evolve. I’m also excited to see how they make Silver Banshee’s origin story their own. Supergirl’s writers may not be perfect, but they sure do write a good super villain.