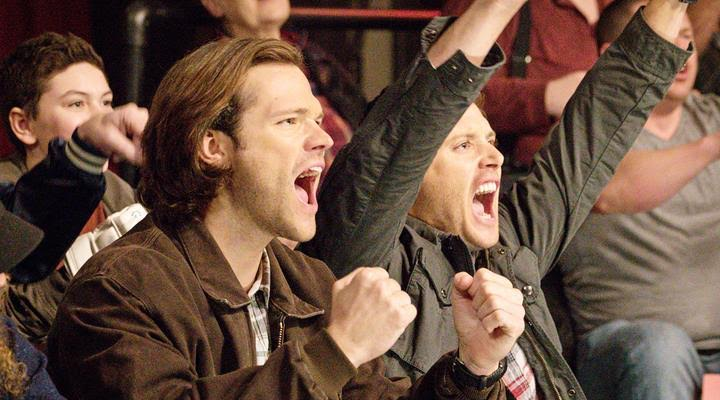 Supernatural gave us another detour episode this week that didn’t advance the main story in any real meaningful ways. That’s alright, though, because this episode was nothing but fun. The writers spoke right to my childhood with a story set in the world of professional wrestling, or at least, semi-professional. I grew up watching wrestling, and my excitement and nostalgia for this episode was mirrored by Dean, who couldn’t have been more excited watching his idols again. Apparently Sam and Dean spent some quality time as kids with John Winchester watching these more or less backyard wrestling matches.

Dean’s excitement about the matches was the best part of the episode by far, and it was some of the best acting I’ve seen from Jensen Ackles. You could just tell he was having a blast playing the inner child in Dean watching the men he used to idolize. Even Sam got to flirt with his first crush, a Diva named Rio. It was a pretty awkward exchange for Sam, but would you expect anything else from someone meeting their first crush? I’d be the same way if I ran into, say, Stacey Keibler if I’m going to use my first Diva crush.

Besides the fun moments with Sam and Dean, the overall story fell pretty flat. It was just another typical “I sold my soul” type episode, and those generally go about the same way. We did get to see, or hear rather, Hell Hounds again, so that was pretty cool. WWE’s “The Miz” made a guest appearance in this episode of Supernatural but it wasn’t really anything special.

The little plot development we did get centered around Casifer and Crowley. I absolutely hated the slave-dog type role they’ve been using for Crowley, so it was nice to see him best Casifer and get free. When Crowley is being a bad ass rather than a pushover he is one of my favorite characters on television, so I was glad to see him back to form. Turns out he’s even been housing a Hand of God in his personal collection. Unfortunately for Crowley he finds out the hard way that they are a one hit wonder, and misses his only shot at Casifer. They’ve used two god-artifacts now, so they better cool off if they want to have any left to use on Amara at some point.

We also got a great moment between the Winchesters after Dean gives an amazing speech about how they are going to win this war and they both essentially agree to be bad-asses until that happens. They so rarely agree on anything that it was nice to see, even if it wasn’t that important of a moment.

This episode of Supernatural had some really fun moments for Sam and Dean, and it was definitely enjoyable to watch. Besides that, though, the story was pretty bland, and it was easy to see this as just another detour episode for the season. I’m not going to complain too much, however, because they are setting up some good stuff for the future, and to quote one of the extra characters from this episode “Who doesn’t love some wrastlin’, am I right?”