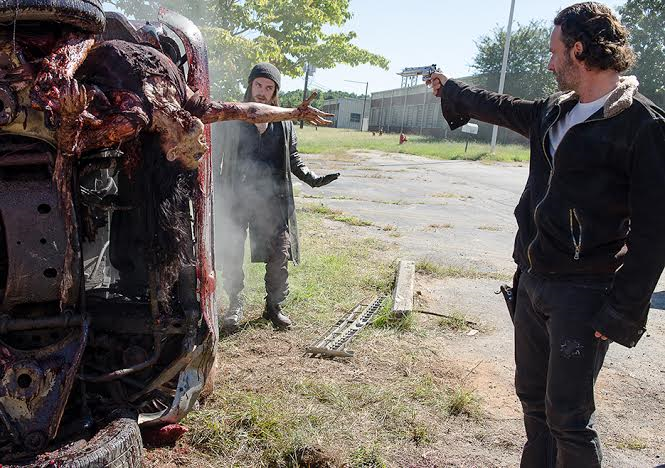 The Walking Dead continued its trend of blessing us with fantastic television each and every week. There really aren’t a lot of things more consistently great than this show, except maybe Steph Curry’s jump shot. This episode was solid because we got a lot of character development, but before I go into the finer details, let’s check out the Kill Count:

Not a lot changed here, but it is interesting to see Daryl and Michonne’s battle for 3rd place. They’ve been even for a few weeks now, but it’s just a matter of time before one of these characters pulls away and catches up to Glenn and Rick. My money is on Michonne, because she tends to do some serious damage with that Katana. I did almost give Daryl a point for saving Abraham by breaking that guy’s arm, but that wouldn’t be fair to everyone else. It was really cool, though, and deserved to be mentioned.

Speaking of Abraham, he is where some of our serious character development came into play this week. He is clearly torn between Rosita and Sasha, and isn’t having the easiest time deciding who he loves more. However, faced with imminent doom that he thinks could be the last moments of his life, he hears Sasha’s voice and that makes his decision for him. He even left behind the cool necklace that Rosita made for him. Pretty sure it was on accident, but still a dick move. Sasha definitely doesn’t seem as interested in Abraham as Rosita does, so let’s hope he didn’t make a poor decision.

No matter what happens with his love life, Abraham will always have the best metaphors and one-liners in The Walking Dead. Seriously, there could be a book written solely filled with his euphemisms. My favorites this week were “Let’s chew up some asphalt” while trying to get everyone going, and “When you were pouring the Bisquick, were you trying to make pancakes?” when asking Glenn if Maggie’s pregnancy was intentional. SO GOOD. The man is like a more vulgar Shakespeare.

Along with Abraham, Carl got some much needed character development as well. He barely had any screen time, but it was enough to show that he’s maturing into somewhat of an adult. He took learning about Richonne really well, and also understood that he needed to stay behind with Judith and keep watch over Alexandria. I flip-flop just about every week on how I feel about Carl, but as of right now I’m not wishing for him to be zombie food. This will most likely change.

This episode of The Walking Dead had a very important purpose, which was to show us just how much influence and power Negan has in the areas surrounding Alexandria. I was wrong about Jesus, who turns out to be a really good guy, and he comes from a camp of, for the most part, good people. They have unfortunately had a run in with Negan, though, and must give him half of their supplies on a regular basis in exchange for their lives.

As Rick points out, his group has zero problems with confrontation and they work out a deal to go and kill Negan in exchange for food and supplies from their new friends. From everything they’ve alluded to about Negan, this will not be some walk in the park. I’m certain that Rick’s group will lose people in the fight, and I’m sure it will be some very important characters. They need to establish just how evil and ruthless Negan is if he is going to be a good villain for the show, and the easiest way to solidify this view will be to have him kill some fan-favorite characters. Please don’t be Daryl, that’s all I ask.

I am about to burst with anticipation when it comes to Negan. I know he is going to be an amazing albeit evil character and I cannot wait until we get a glimpse of him. I’m sure the group’s first run in with him won’t be until the season finale, but I’m hoping for some more hints as the season progresses. This is shaping up to be my favorite season of The Walking Dead and it seems like it will keep getting better and better.