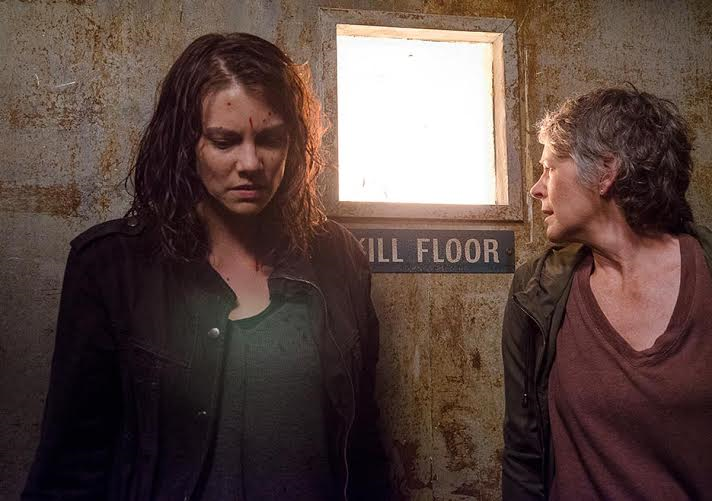 Well, it was bound to happen sometime, but this season of The Walking Dead finally gave us an episode I wouldn’t consider to be one of the best of the series so far. That’s not to say that this week’s episode was bad, it just wasn’t up to par with what we have been consistently getting from this season up to this point. This episode did have some great cinematography and symbolism, but we’ll go into that after we check out the Kill Count:

Maggie jumped a spot, and Carol added some to her count, but otherwise it was a pretty tame episode as far as the amount of kills went.

This episode of The Walking Dead was definitely a filler episode, as it really didn’t do anything to advance the story in any meaningful ways. Carol and Maggie were abducted last episode, and this one focused on them and their captors. They were held in the kill room of what I can only assume used to be a meat processing plant. No other buildings come to mind that have a designated “Kill Room.” I’m also about 85 percent sure they just used a set from one of the Saw movies. At least that’s the vibe I got while watching it.

Carol is still struggling with her moral code and whether or not she should be killing humans or not. This annoying philosophy is actually the reason her and Maggie get abducted at all. You just can’t hesitate when it comes to these situations in a post-apocalyptic society. It always kill or be killed. Thankfully, Maggie understands this is how the world is now, and begins their escape by brutally killing one of their captors with some well placed hits from the butt of her handgun. There are actually a couple instances in this episode where Maggie gets really intense when she is attacking someone. Perfect example of why you should never mess with a pregnant woman. They give absolutely zero fucks when it comes to protecting themselves and their unborn child.

Maggie’s rampage inspires Carol’s inner bad-ass to make itself known again, and while she may struggle with her actions, she does exactly what she needs to do to survive. She even admits to being scared of what she is capable of. The important thing to note from that scene is that she IS capable. Unlike Morgan, who sucks.

Carol is clearly struggling with morality, but she knows what to do when she has to, and this is why she doesn’t annoy me in the way that Morgan does. Her struggle makes it more real, while Morgan’s flat out refusal to kill someone shows weakness. There is some great symbolism of Carol’s struggle shown in the last shot of the episode. We get a close-up shot of her squeezing rosary beads so hard that she his dripping blood from her hand. This is an awesome shot that depicts perfectly what she is going through internally.

Speaking of great shots, this episode of The Walking Dead had some more well done cinematography a littler earlier on when Carol and Maggie are being taken to the meat-plant/Saw room. While they’re being taken to the plant, Maggie and Carol’s jackets have been pulled over their heads so they can’t see where they’re going, and this is the viewpoint we get for the entire shot as they travel. The first-person angle was a very creative way to shoot the scene, and I felt much more connected to Carol and Maggie’s plight than I would have otherwise.

The Walking Dead slowed down a bit this week, and we really didn’t get any closer to finding out who Negan is or where he is hiding. I don’t want to complain, though, because we have been spoiled with amazing television from the show for multiple weeks in a row. We did learn that Negan’s followers are extremely loyal and also ruthless. We know that the eventual meet-up between the groups will be bloody, and Negan will be a worthy match-up for Rick I am sure. Hopefully we don’t have to deal with too many more filler episodes as this season winds down. I know they are necessary sometimes,  but I need to know more about Negan and his group, like, right now.