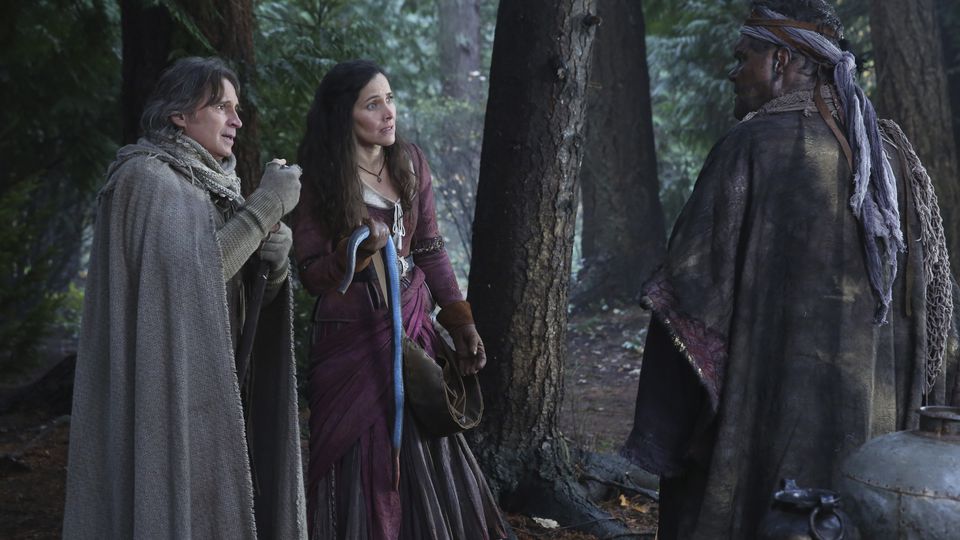 This week’s episode of Once Upon a Time was a prime example of the pattern that the show falls into following a season premiere. There was plenty to complain about, but also plenty of drama, action, and exciting reveals to keep us coming back next week.

The best part of the entire episode was Emma’s and Milah’s meeting. As soon as we caught our first glimpse of flashback Milah I knew that’s who Rumple would be enlisting for help getting past the super dangerous force field (lol). I also thought I was ready for how awkward it would be when Emma and Milah came face to face, but I was wrong, and I’m glad I was. It was better than I could have expected.

Let’s revisit Rumple’s introduction real quick: “This is Mila, my ex wife, and Hook’s ex also. She’s also Baelfire’s mom, of course.” I wont lie, I watched this scene three times and laughed every time. Sometimes I forget what a tangled, soapy web Once Upon a Time is, so it’s always a treat when the writers take the time to poke fun at themselves and remind you.

After the awkward introduction Emma and Milah actually managed to get along thanks to their mutual interest in saving Hook. Of course, they ended up barely even needing Milah, because the rescue mission they’ve been building up to the past the past three weeks ended up being super easy.

Given how difficult they seemed to have been finding the task the past two weeks – with the whole not knowing where Hook was, followed by Hook’s lame attempt at an escape where he helped Meg but for some reason couldn’t save himself – it should have been a little more difficult than joining hands to get past some force field, walking across a balance beam, and, tada, the rescue mission’s complete.

I get that the real issue wasn’t finding Hook but figuring out a way to get themselves out of there, but for the past few weeks saving Hook has been the biggest conflict, and in the end his rescue ended up being a little more than anticlimactic.

While Milah was kind of useless in the grand scheme of saving Hook, her presence meant we got some nice flashbacks of her and Rumple. Once Upon a Time’s thing has always been its incorporation of flashbacks, and while they can occasionally be unnecessary they can also sometimes be super interesting. I, for one, found this week’s to fall more towards the interesting.

We’ve had a lot of insight in the past to how awful Rumple and Milah’s marriage was for both of them. This week, though, we got more information than ever before why and how their marriage fell apart – aside from the Rumple being a giant wuss and Milah being kind of a bitch about it, of course. Milah clearly wanted more, and after Rumple made his first and worst deal, it was obvious why Milah ran off to that something more (in the shape of a very handsome two-handed pirate).

Even the flashback didn’t exactly justify Rumple throwing Milah into the River of Lost Souls. I mean yes, we know that Rumple is EEEVILLLL (if you didn’t read that in a Mermaid Man voice we can’t be friends) but it was still hard to believe he’d screw over his ‘friends’ for such a shitty deal.

Even I saw Hades playing the “I didn’t say when” card coming, and Rumple is usually way smarter than me. Clearly the reason Rumple took the deal was because he was desperate to get back to what turned out to be his pregnant wife, but if he had taken a little more time to think about the deals he makes (an obvious character flaw of his) he probably would have gotten back sooner if he had just stuck to the original plan.

Belle’s pregnancy was the biggest reveal of this week’s episode of Once Upon a Time. Belle and Rumple have had quite the rocky relationship. It’s so unstable that I never really even considered for a moment that babies could be in their future. It just didn’t seem like somewhere the writers would go for them, because of the conflict that’s already naturally there with Rumple always being such a dick to her.

Unfortunately it looks like their marriage is about to get even rockier, once she finds out that not only is she pregnant, but also that Rumple made a promise years ago to give up his second born. Baelfire/Neal thought Rumple was a bad father to him, but Rumple topped that by betraying this new child before it’s even been born. Father of the year, ladies and gentlemen.

The whole thing managed to top what was supposed to be the episode’s biggest reveal: that Emma, Regina, and Snow are now stuck. However, those were the obvious choices for Hades to make. Not only are they some of the most interesting characters on Once Upon a Time, but they’re also the ones that will hit the rest of Storybrook the hardest. Luckily there’s only about a 10% chance that more than one character will be stuck in Underbrook, and I highly doubt it’s going to be one of them. Hades is sure to be disappointed.

Speaking of Hades, he’s one of the best Disney villains because of two things: his flaming, blue hair and his sass. And while he’s got the hair (which, by the way gets worse every time they use it), like with Meg, the writers of Once Upon a Time haven’t reached Hades’ sass potential.

This was the first week that we even got a glimpse of how witty Hades can be, but he still hasn’t even come close to his movie counterpart’s hilariousness. The writers can do better; we see it with Regina every week. I’m sure by the end of the season we’ll have at least one new iconic Hades line to add to our favorites of his, but so far I’m disappointed.

Finally, though most of the episode was dedicated to the love square that is Emma, Hook, Rumple, and Milah, Regina managed to score herself a very minor storyline. Like they said upon entering the Underworld, a lot of the people down there are there because of the Storybrook gang, so it must have been a major relief for Regina to find out that Daniel had moved on to a better place. It was a sweet distraction from the rest of the drama, even though it was a bit odd and convenient that Cruella – who I thought was mad at them – would be willing to help Regina out.

Plus, the random horse thing was weird. Horse thing aside, however, the episode satisfied me until next week, when I’ll certainly have much more to both praise and mock.