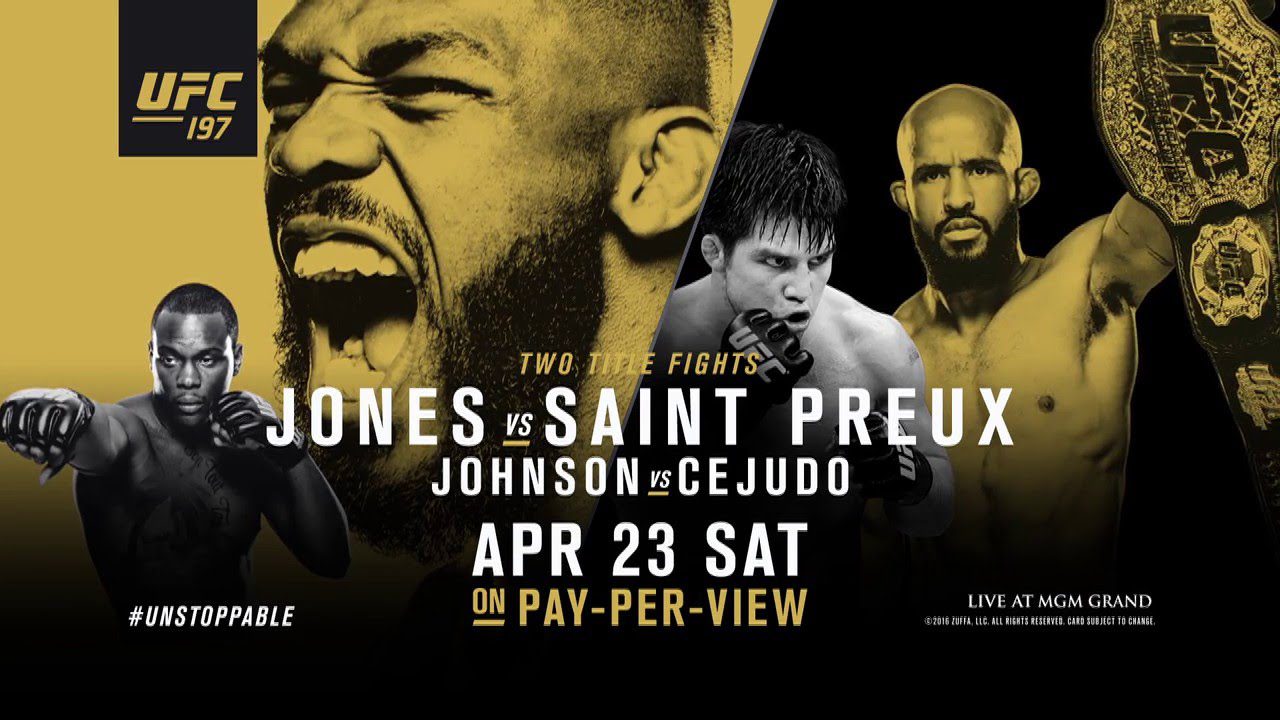 Image courtesy of the UFC.

With UFC 197 upon us, all attention should be on the wonderful main card set for Saturday. A card featuring the return of the No. 1 pound-for-pound fighter in the world, Jon “Bones” Jones. He will be fighting the sixth ranked light heavyweight in the world, Ovince Saint Preux, who is replacing the champion of the division, Daniel Cormier, who suffered a leg injury during training leading up to the bout.

Also on the card is a Flyweight championship showdown between the only champion at that weight the UFC has ever seen in, Demetrious “Mighty Mouse” Johnson, taking on his toughest challenge yet in undefeated, gold medalist, Henry Cejudo. With these two monster fights as well as three other great matchups set for the weekend, it is a shame that the spotlight is being stole by a fighter not even on the card; Conor McGregor.

With McGregor using Twitter to announce his “retirement” from the sport on Tuesday, April 19, sending the MMA community into a spiral which will surely eat up some of the anticipation of the stacked card Saturday. We now know that McGregor pulled this selfish stunt due to the fact that he didn’t want to fly from Iceland, to Las Vegas and back to his training in Iceland, for a press conference. A press conference with his opponent Nate Diaz, a press conference that was mandatory for both fighters to attend according to their fight contract. Furthermore, it was a trip McGregor knew about for months. In short, the best fighters fight regardless of the situation and McGregor has chosen NOT to fight. That’s all the time I’ll give McGregor here because I won’t let him ruin UFC 197 anymore than he already has.

The main card gets started with a fight between two guys who have yet to be in the eyes of the mainstream media due to how young one man is. and lack of exposure for the other. Both are well known to the hardcore MMA fans and UFC president Dana White has made a fine choice for a leadoff bout. Yair Rodriguez vs Andre Fili is an ideal way to set off such a packed event. Rodriguez, being known for his flashy style which includes a plethora of spin kicks and explosive strikes. His opponent, Filli is a much more well rounded fighter, but also prefers to keep the fight on the feet and let his fists fly. I’ve already mentioned that both guys aren’t well known, but if track records hold any value, one of these guys will have a highlight reel knockout.

In a bout as even such as this one is, I tend to look at a fighter’s age which happens to be close here, so pro records are important. In this case, the more experienced fighter in Fili is known to be solid on the ground, whereas, Rodriguez, the younger of the two, is a fierce striker with an untested ground game. If Fili’s experience has had any type of everlasting effect on him he should get the W. Expect Rodriguez to try and end it early due to his questionable conditioning. Fans should not blink during this bout as one-shot from Rodriguez could make my pick worthless.

My pick: Andre Fili via rear naked choke in the 2nd round.

If there is a fight to go relive yourself and grab another beer from the fridge, this is the fight to do it. Hell, you could even turn an NBA playoff game on for 20 minutes because this fight is the battle of the decision makers. Not because they make good decisions in the octagon, but because they pull the decision wins in their fights by boring their opponents into submission.

Although other fighters and training partners of Natal say he has some knockout power in his hands he never seems to use it in his fights. He is also on a four fight win streak, none of which were finishes. As for Robert Whittaker his lack of luster has been blamed on the tough weight cut he had to make during his time on Fox Sports One’s “The Ultimate Fighter.” As a pro he has yet to prove that statement true but he will finally get his chance at the 185 pound division. Unless he has made some serious improvements I can’t see the weight jump making such a difference where he will begin tearing through his opponents.

This one is a real head scratcher to me as to why this is on the main card. Two sleepers lulling us into a false sense of boredom before the explosion of the final three fights? Maybe.

My pick: Natal via split decision.

Now this is a fight. A clash of two lightweight phenoms that specialize in knocking out their opponents. Anthony Pettis is the third ranked lightweight in the world although he is coming off consecutive losses, a win over Barboza would make him the next in line for immediate shot at the lightweight champion, Rafael Dos Anjos. Standing in his way will be ever dangerous Edson Barboza, who hurls kicks as if he has no arms. With eight of his professional wins coming by head-kick knockouts. Coming off a loss to Tony Ferguson, a win for Barboza will surely vault him into the top five of the division, where he could disrupt what many people declare the toughest division in the sport.

This one will be a barn-burner, full of flying strikes and spinning kicks, enough to knock someone’s head off their shoulders. Which is exactly what I believe will happen.

In 22 professional fights, “Showtime” Pettis, has never been knocked out or submitted, even in losing, he has never been finished by an opponent, and in the beautiful world of combat sports there is a first time for everything. In Pettis’s case, it’s a trip to dreamland courtesy of a wild kick delivered by Barboza. Enter Sandman.

My pick: Barboza via knockout in the 1st round.

If there has ever been a “perfect champion”, it’s Demetrious “Mighty Mouse” Johnson. Not only has he successfully defended his belt in nine straight fights, but since the Flyweight division has existed in the UFC, he has been the ONLY champion. Since 2012, Johnson hasn’t even come close to tasting defeat. I’m not positive the man has even lost a round since he became the man to beat four years ago. The UFC has thrown Joseph Benavidez at him twice, and John Dodson got a rematch as well, both fighter’s lost their rematch even more decisively than their first shot at Johnson. So what was the UFC to do? Other than start building a 125 pound machine similar to Wolverine, they are running out of options. Fortunately for Dana White and company, Henry Cjuedo wanted to challenge himself after winning a gold medal at the summer games in Beijing. That challenge was Mighty Mouse and Cjuedo gets him Saturday.

If Johnson is the “perfect” champion, then Cjuedo is the “perfect” challenger. An unblemished professional record at 10-0, he has ran through the same guys Johnson destroyed, he is a gold medalist, and his strengths mirror that of the champion’s perfectly. His wrestling is obviously better than anyone in the division, made apparent by the giant freestyle wrestling gold medal dangling from his neck. His competitive drive is that of a world champ, again, that gold medallion speaks volumes! Just like the fight before this, there is a first time for everything in fighting and the Flyweight division needs Cjuedo to be the second champion in the history of 125 pound division in the UFC.

My pick: Cjuedo via 3rd round referee stoppage due to ground strikes

After a 15 month absence the pound-for-pound No. 1 fighter in the world and former Light Heavyweight Champion, Jon “Bones” Jones, makes his long awaited return. Although, this was supposed to a championship showdown between Jones’ arch nemesis and current champion, Daniel Cormier. Unfortunately, Cormier was injured during training camp forcing him to back out of the fight. With Jones so set on his comeback happening sooner rather than later, he wasn’t about to wait around for Cormier to heal. The UFC rightfully obliged and somewhat unknown, but brutally vicious, Florida boy, Ovince Saint Preux, was ready to step up and attempt to spoil Jones’ homecoming.

Saint Preux has a better chance than even some of the well known experts are giving him. Jones uses his length and reach to beat many fighters. His ability to fight from outside the pocket is rather frightening for his foes, but what is usually a seven to even 13 inch reach advantage, is reduced to only four inches due to Saint Preux’s size. Also, both fighters are 6’4”, taking away the height advantage Jones depends on to keep opponents at a distance. Ovince has made it abundantly clear that regardless of the late addition, or his lackluster record (19-7), he is prepared to step up to the challenge as he has done so triumphantly in the past against guys like Tim Kennedy and Shogun Rua.

I give the striking advantage to Jones because he is the best in the world at it. As good as Jones wrestling is, Preux has a profoundly underrated ground game. Proving so in a recent fight, when he choked out his opponent with a shoulder choke that has yet to be named! When Joe Rogan doesn’t know the name of a choke at cage side, that choke is nameless. His jiu-jitsu is that of a black belt and his strength is out of this world.

Jones has battled and banged with the biggest and the baddest the UFC light heavyweight division has thrown at him. Whether five-round battles or bloody brawls with legends, he consistently comes out on top and usually does so in exciting fashion. So far, he has been his own worst enemy, and this fight is the one where he can put his ugly past behind him. But has the ring rust got to him? I certainly think so.

This card will be known as the underdog card. As three fighters will experience a knockout, submission, or a loss for the very first time in their career.

My pick: Saint Preux via arm triangle choke in the 4th round