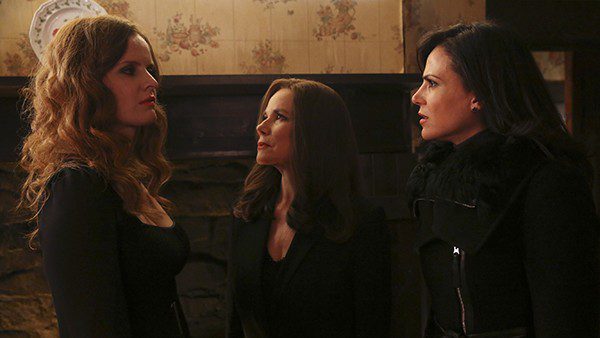 A fellow fan of Once Upon a Time described how I felt about this week’s episode pretty accurately and much more concisely than I will: “it was better than I expected.”

Once Upon a Time has been on the air so long that it seems that the writers have been struggling lately to keep us invested in its weekly episodes. As I’ve said before, the premieres and finales are where the real shit goes down. Everything in between is mostly filler.

But that’s not to say that those episodes can’t be noteworthy in their own right. While there may not be a lot of action that happens throughout the mid season episodes, Once Upon a Time instead relies on the relationships between its characters and the emotions that come from that.

Regina and Zelena’s relationship is something I’ve always wanted to delve into deeper, and I’m glad they did so in such a poignant way. I was much more invested in their flashbacks – to the point where I was actually near tears at some points – than I was during Killian and Liam’s similar episode a few weeks back.

With an episode called Sisters, I expected to spend the majority of the time with Regina and Zelena, but I didn’t expect to learn anything really groundbreaking or new. I thought we had already learned everything we needed to know about the pair’s difficult relationship. I also never thought that something Cora had done could shock me. We already know she’s an awful mother, what more could we learn that would top anything she’d done in the past?

But then we saw a young Regina wish she had a sister to play with, followed by a young Zelena excited to finally get to use her magic to help someone (what a soul crushing line). We watched as Zelena and Regina came to the realization that they were sisters only to have Cora rip them apart and wipe their memories.

What broke my heart even more than Regina crying to her sister that she would find her one day was the fact that we got a peek at what Zelena could have been like if Cora hadn’t been such a shitty mom. All Zelena has ever wanted was to be loved, which she was for one day, and she didn’t even get to remember it.

I’m glad that the sisters have the future to get back to the way they felt about each other for that one day, but I still can’t shake the feeling that Zelena is going to betray Regina again, especially now that Regina has given her blessing to Hades (but if she does I can’t even blame her after this episode).

I will still never understand why Cora’s daughters continue to forgive her – particularly Regina. Not even Cora restoring their memories was enough to have me forgive her, let alone warrant her going to “a better place.” Bitch deserved to burn in hell.

I wish that the entire episode had been dedicated to Regina and Zelena, as they were hands down the most interesting part of not only this week’s episode but also the past few weeks overall. Unfortunately, that’s just not how Once Upon a Time works.

After weeks of being promised an epic twin show down what we got was pretty pathetic. The only good part about the James and David minor plot development was the few minutes that James pretended to be David. Emma’s quick line, “dad what the hell” got a big laugh out of me for what was otherwise a boring distraction from the real meat of the episode.

There wasn’t much else of note from this week’s installment of Once Upon a Time – besides the reintroduction of Peter Pan, who was one of my favorite characters. So far it’s been either a hit or miss with the return of our old fan favorites, and given how interesting Pan’s season was I’m hoping for a hit this time.

This week’s episode also finally answered what’s been bugging me all season, what happens to the Underworld when Hades leaves? The answer was simple enough, it continues to exist, but it was about damn time they addressed that.