Okay, with that blatant display of SEO over with, and because I am not able to record a podcast today, I figured I’d write up a little something about last night’s second episode of Season 6, “Home,” for Game of Thrones. And since The BMF needs a person to review the show, I think instead of a podcast on Mondays, I’ll review this excellent show. Good? Awesome. 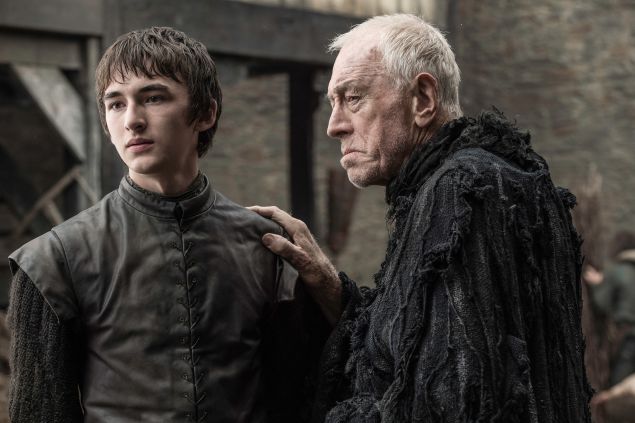 The episode opens with Bran Stark chilling out, maxing, relaxing, all cool, leaning into the branches of the tree to do all that good stuff. While “lost” in it, Bran actually is present in the past! Somehow, he and the Three-Eyed Raven dude are able to see what went down many years ago and we see…

… Young Ned Stark with his head connected to his body
… Young Benjen Stark getting his ass beat by his older brother
… Lyanna Stark alive and well and not made of stone
… but more importantly, Willis! (I’ll assume this is the correct spelling, but it could very well be Ys instead of Is since people from this time are fuckyn weyrdos)

Sure, we didn’t get to see Jon Snow resurrected last week in the premiere episode of the sixth season, but we get this delightful nugget of knowing Hodor’s government name! Now, we must wonder how Hodor came to be! Was it because some young punk black lord with an afro couldn’t understand what the the hell young Hodor was saying and kept asking him what he was talking about, perturbing Willis so much he was forced to say fuck it and change his name to that thing he wanted to walk through in moments of puberty and say, “What up, bitches?” I have no idea, but I’m rolling with this sensible theory.

The scene basically ends in present time with Meera being that person who takes her ball home because she sucks at playing with balls. So, with that said, I’ll have to call “lesbian” on this chick. Simple and close-minded? Sure… but I’m trying to make Westeros great again.

Next scene we head up north to Castle Black, which oddly enough does not have a single brother repping the joint. So, there’s no cool handshake to greet each other with, but instead a simple grunt of acknowledgement. Lame. However, if this took place in America, the Clintons would make sure that was reversed… good thing Bernie Sanders would be there to protect them, much in the same way he was there during the “Wars of the First Men and the Children of the Forest.” Homeboy has been around a long ass time, for real.

Anyway… Alliser Thorne, the leader of the asshats that killed Jon Snow last season, demands Jon’s body from Davos Seaworth and company, who have barricaded themselves in one of the rooms of Castle Black. Davos notes that he’s not much of a fighter and apologizes pre-emptively to the crew for how horrible he’s about to look before he unsheathes his sword. You got to love this dude for being self-aware. Of course, if he was on my squad, I would not want him on my squad. No doubt. I picture him stabbing his foot as he drops his sword because it’s heavier than the butterknife he’s used to fighting with and then throwing punches like a sissy – open-handed shooing motions in the general direction in front of him while squealing with each throw of his hand. Instead of chi, it’s more like hee hee.

Luckily for him, and everyone else in the room (although I have no doubt Ghost would have survived after ripping several throats out, eating said throats, and then shitting out said throats on the bodies that once owned said throats), Tormund and the rest of the Wildings, including Wun Wun the motherfuckin’ giant, come to the rescue. Some idiot Crow shoots an arrow at Wun Wun while screaming, “Nice fuckin’ name,” to which Wun Wun grabs the Crow by the leg and smashes him against the wall. Also, it’s not very clear that the now-dead Crow said, “Nice fuckin name,” but I like to think that. Anyway, Alliser and the rest of the asshats are rounded up and put in jail. No truth to the rumor that they started buying drugs from the Latinos to sell to their own people. However, they are definitely getting brolic with the free weights.

Next, some dumbfuck dude starts talking that shit all dumbfuck dudes do about chicks wanting them – in this case, Cersei Lannister wanting a piece of his D as she walked naked as part of her atonement last season. Unfortunately for him, Mountainstein gets wind of this shit talk and money shots his head into a wall. Afterward, Mountainstein heads back to Cersei in the Red Keep, which she tries to leave from in order to go to Myrcella’s funeral at the Sept. However, King Tommen has ordered it so that Cersei can’t leave, and his Kingsguard are there to stop Cersei in her tracks. They flex. Mountainstein flexes. They pee a little in their armor. Fortunately for them, Cersei abides and no one gets that steel in their arse. And by “no one,” I mean the Kingsguard. Mountainstein is no joke!

We head to the Sept where Jaime Lannister is telling his son, King Tommen to stop being a bitch. Jaime gets it, but Tommen needs to grow some hair on his testicles, starting by apologizing to Ma Dukes. King Tommen says bet and leaves after the High Sparrow rolls up. Jaime and the High Sparrow take measure of each other by metaphorically whipping it out. The contest ends when the High Sparrow’s mens come out from behind the Sept’s columns like they were in a Bollywood movie, except there’s no tree, smiles, or dancing. 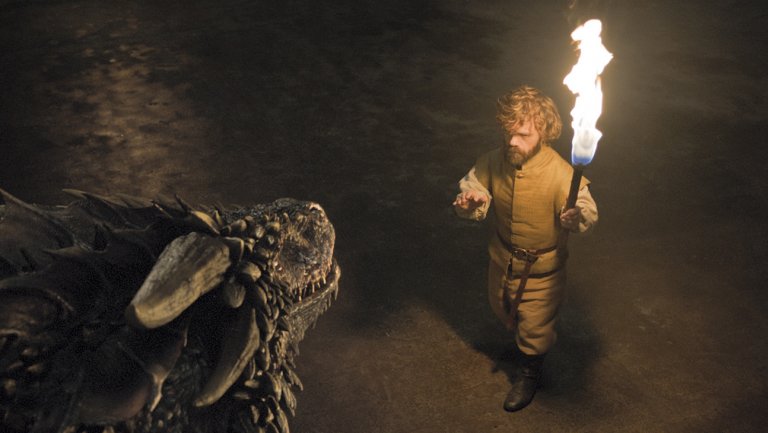 Tyrion Lannister, Lord Varys, Missandei, and Grey Worm are all together talking about the latest goings-on in the cities that Daenerys Targaryen freed and it’s not good. Also, to further the bad news, the two remaining dragons, Rhaegal and Viserion, are missing their mom and aren’t eating. Not good according to Tyrion, a fanboy of all things dragon, who also throws out these gems:

… Speaking to Lord Varys, he of no dilznick, after Varys looks down upon Tyrion boozing it up: “If I lost my cock, I would drink all the time.” When met with a death stare from Grey Worm, he of no dilznick as well, Tyrion mentions that he meant no offense to Grey Worm, who we all know digs on Missandei. Unfortunately, Grey Worm is friend-zoned forever.

… When pressed about his knowledge of dragons, Tyrion says, “That’s what I do, mofuggas. I mofuggin’ drink, and I know some mofuggin’ thangs.”

So, knowing that the dragons need to be free of their chains in order to grow properly, Tyrion goes down deep into the temple and basically removes their chained collars. They are now “free” to move about the room as they please, and because of that, Tyrion will now be free to roam about around them without looking like a walking marshmallow.

Quick run-through of the rest of the scenes:

… Arya Stark is still blind as a nerd hanging out with the hot chick the night before a book report is due. She gets abused by the Waif before Jaqen H’ghar strolls by and tells Arya to follow him and to stop being a beggar – a fate he basically laid upon Arya, so this is some great display of Stockholm Syndrome.

… Ramsay Bolton is a straight-up asshole that I’d like to beat the hell out of. He kills his dad, Roose Bolton, his stepmother, Walda Bolton, and his newborn half-brother and fullborn heir to Roose, Purina Dog Chow Bolton. Ramsay has no chill.

… Theon Greyjoy tells Sansa Stark that he’s leaving the group of her, Brienne of Tarth, and Podrick Payne. Despite Sansa saying that she would speak for him, Theon knows he fucked up and can’t be forgiven for what he’s done. So, he’s heading the fuck home where he will deal with the certain teasing from his sister, Yara Greyjoy, and the misgivings and attitude from his father, the king of the Iron Islands, Balon Greyjoy.

… Except, Balon is killed by his brother, Euron Greyjoy who seeks the seat as king of the Iron Islands. Oh, Theon, nothing will ever go easy for you. And you can’t even have the joy of “shaking dice.” Life blows. Anyway, if Theon gets back to the Iron Islands, who will be king, or even Queen if Yara gets enough votes? By the way, when the experienced seafarers of the Iron Islands launched Balon’s coffin-raft offshore, they all know the tide is just going to bring him back, right? They go nowhere near far enough for that shit to float off into the sea… no wonder they keep losing battles.

And, finally, the scene everyone is talking about… Daenerys and Drogo getting it on. Yeah, baby! Oh wait, sorry, that was just me watching my personal Season 1 highlights. My bad.

No, the final scene is obviously the best of this episode. Davos visits Melisandre and asks the question we’ve all wanted to know the answer to – can you bring Jon Snow back to life? And just like getting a “maybe” mixed in with an awkward moment of silence from a girl you really like and ask if she likes you back, Melisandre basically shrugs her shoulders as if to say, “I don’t know, but I guess I’ll try.” So, they lay Jon Snow’s stab-filled body on a table, hoping that Melisandre can resurrect Jon. Instead, she gives him a makeover and Snow remains dead. She, Davos, and several others all leave the room, disappointed that Jon wasn’t resurrected, with Melisandre supremely regretting not using the cucumbers on his eyes trick, all of them knowing that Snow will never live again to know nothing. However, Ghost never leaves his master’s side and is the only witness to Jon Snow waking up from death!

The motherfucker is back, y’all! And this time, with a trim. 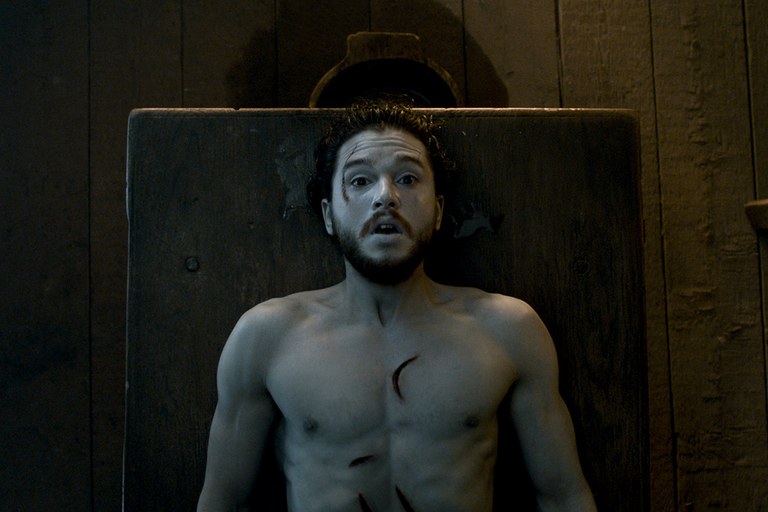