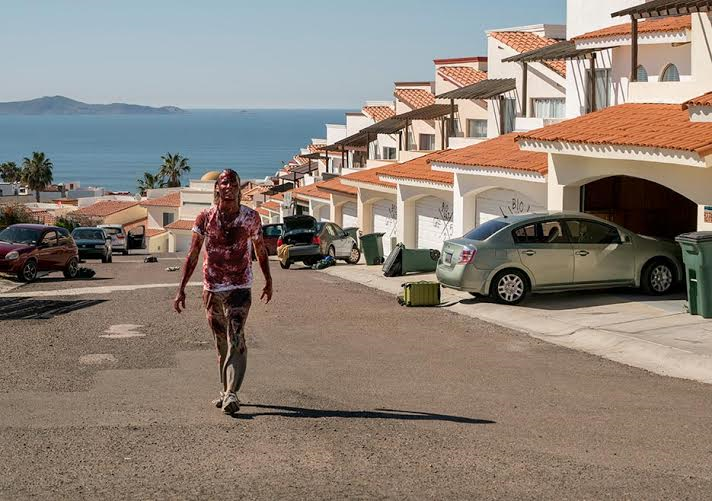 Fear the Walking Dead has been hit or miss early on this season, but this week they stepped up their game and delivered a solid episode. I really want this show to succeed, so an episode like this week’s makes me hopeful for the future.

That’s not to say that this episode of Fear the Walking Dead didn’t have its flaws. Most notably was the boring backstory we received on Strand. Normally I love a good backstory because it usually adds depth to a character. In Strand’s case, however, it took away from the shroud of mystery that they have developed within him up until now. He was one of the best characters because you never knew what to expect from him or the specifics of his motivations. By giving us a look into his past it starts to strip away at that mystery that has been working effectively.

The best part of the flashback scenes with Strand were that we found out he is gay, and the writers were even ballsy enough to throw in a kiss with his significant other. I love it when shows I care about break barriers like that, even if they might be small. Not a lot of shows are doing things like that and this shows that the Fear the Walking Dead writers and producers aren’t stuck with some prehistoric idea of society.

After Strand’s semi-boring backstory, Alicia’s stupidity finally came full circle when her walkie-talkie pal and his friends show up and take over the yacht. There weren’t very many of them and I was honestly disappointed in our group for letting themselves be so easily duped. This is the zombie-apocalypse here… Channel your inner Fox Mulder and TRUST NO ONE.

While they are busy being attacked by wannabe pirates, Nick is on the mainland to find Strand’s buddy and bring him back to the yacht. He uses the cover yourself in guts tactic to perfection and makes his way to the location Strand gave him. On their way back to the yacht, Strand’s friend quickly proves his worth by sniping a couple of the captors in the head, allowing Maddie and Nick the opportunity to stab Jesse Mccartney to death. Oh, you didn’t catch that? The one guy in charge of the faux-pirates was former teenage dreamboat Jesse McCartney. Don’t be upset if you didn’t realize it, though, the only reason I know is because my girlfriend incessantly pointed it out to me while we were watching.

Unfortunately for everyone, Nick and the new guy did not get to the yacht in time to save Travis and Alicia who are now prisoners and on their way to the pirate base camp. I feel terribly for Travis, but Alicia kind of deserves it.

We also get a shot at the end of the episode of Maddie taking a dingy out to rescue Strand who has been floating around ever since his escape raft was shot and lost all of its air. They leave this scene a little ambiguous by not showing Maddie actually pull Strand out of the water. I’m assuming they did this to make us as viewers question if she would actually save him. I don’t see any scenario where Maddie doesn’t save him, though, so this ending really wasn’t that dramatic for me.

This was a great episode of Fear the Walking Dead because it really set the show on a great path for the rest of the season. We have new enemies to look forward to, as well as some new questions as to where the group will ultimately end up. I like that the show has kept the characters out to sea this long because it makes the show drastically different from The Walking Dead and makes for unique television. If we keep getting episodes like this one I’ll be all aboard for a third season of Fear the Walking Dead.