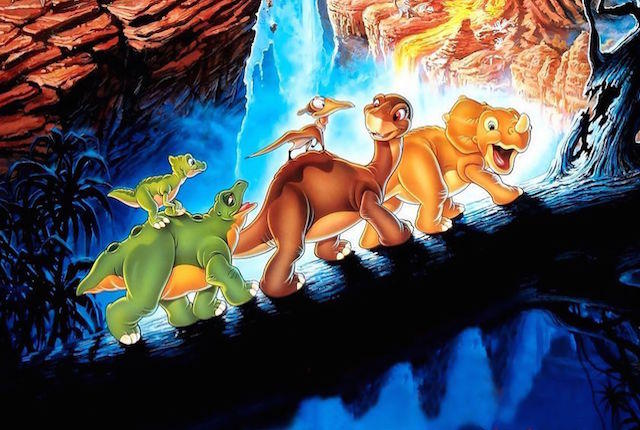 Millennials are known to be the most nostalgic of generations; it’s a fact. We yearn for the days of Nicktoons and Dunkaroos, never missing a chance to reminisce about “the good old days” like we’re three times older than we actually are. Luckily for us, we’re also the Netflix generation, which means anytime we’re feeling particularly nostalgic we can revisit our childhood for an hour or two. So join me as I rewatch the best of the 80’s, 90’s, and early 2000’s and see how well our memory holds up.

The Land Before Time was my favorite movie when I was a kid. Now that I’m officially an adult (or at least doing my best to pretend to be one), I’ve wanted to rewatch it for quite some time. I was really young when I last watched The Land Before Time so I had noidea what to expect. The Netflix description gave me a heads up of the trauma I was about to relive:

“When an earth-shattering quake kills both of his parents, a young brontosaurus named Littlefoot teams up with other orphaned dinosaurs to survive.”

Why is it that all of our childhood movies begin so tragically? Maybe it explains why our generation is primarily made up of a bunch of man-babies and woman-babies. Somewhere between The Land Before Time and The Lion King we were scarred so badly that we subconsciously said “fuck that” to ever growing up.

Side note: there are quite a bit of similarities between these two childhood ruiners. Like Simba, Littlefoot watches his parent die. In both The Lion King and The Land Before Time there’s references to The Circle of Life in a failed attempt to make the death less horrifying. Finally, Littlefoot also talks to his disembodied parent who comes to him in a vision of clouds. Clearly Disney’s got some explaining to do.

It’s a weak silver lining that Netflix only got the plot half right. Littlefoot’s dad is already dead before the events of The Land Before Time, and during the earthquake only his mother is killed. Sure, it’s still awful, and Littlefoot and I spent the next ten minutes of the movie crying, but it could have been worse.

Apparently Steven Spielberg and George Lucas’ initial concept of The Land Before Time had about ten more minutes of footage, mostly pertaining to the encounter with the Sharptooth, but it was cut because it was deemed “too scary” for kids. I don’t see how it could’ve been worse than the narrator stating that Littlefoot knew his family would be “together forever” only to have him watch his mom die five minutes later, but apparently it was.

After the earthquake and a brief bout of depression Littlefoot realizes that he’s got to fulfill his mom’s dying wish and make it to The Great Valley, a promised safe haven rife with Treestars – I have a theory that Treestars were created solely to get 80’s and 90’s kids to eat their vegetables. Why else would they look so delicious?

On his journey Littlefoot is joined by four other dinosaurs. Their names are:

Cera: Cera almost gets eaten by a Sharptooth on multiple occasions, and quite honestly deserves it every time. She’s loud, stubborn, and kind of a bitch. It’s not all her fault, though, because her dad is sort of racist (speciest?). I assume she gets better, and hopefully less shrill, because I remember really liking her as a kid.

Petrie: Petrie is a “flyer” who is afraid of heights, and therefore doesn’t know how to fly. He’s a worrier and a scaredy cat, but in an endearing way. Spoiler: eventually he learns to fly during the group’s last faceoff with Sharptooth.

Spike: Spike doesn’t talk at all during this movie, but he’s by far my favorite character because of our shared interests: eating and sleeping. Besides Littlefoot he’s the only orphan of the movie and gets adopted by Ducky’s family at the end.

And Ducky: Ducky is adorable. She has an affinity for repeating things like, “yep, yep, yep” and “nope, nope, nope.” Her species is referred to as “big mouth” which makes a lot of sense because I don’t think she ever shuts up.

By the way, if you thought the story behind The Land Before Time couldn’t get any more tragic, you’re wrong. Judith Barsi, the ten-year-old who voiced Ducky, was murdered by her father four months before the film premiered. Good thing our parents never told us that little tidbit.