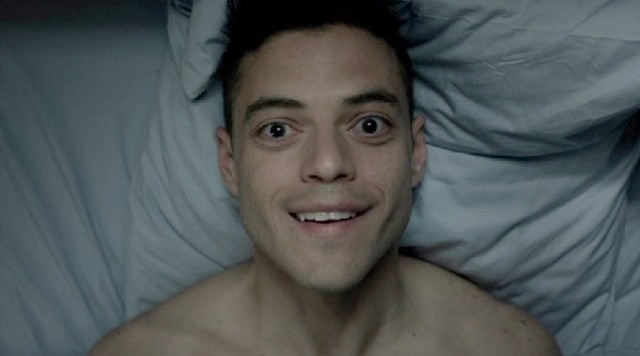 We begin in an arcade, the one made memorable in Mr. Robot during Season 1. Off the grid describes the quarters perfectly, and even more perfect is the vibe of this arcade as a hacking hotspot. After a lengthy scene of Elliot’s former comrades discussing the infamous Coney Island location (Romero is looking to rent out the place and Mobley has a potentially interested renter), we shift to Elliot. He’s on the phone with Tyrell, giving us an extremely paranoid protagonist. The call ends once Mr. Robot hangs up the phone which of course means, as we learned last season, that Elliot himself was responsible for the hang up.

Gideon’s death then pops up on the news, a sad ending for a quality character. The carnage doesn’t end there – Romero is also dead, murder or suicide not being clear at the onset, but the circumstances are suspicious given the possible arcade rent exchange. Mobley goes to Romero’s house and finds him motionless on the ground with what seems to be a fatal gunshot wound.

Mr. Robot thinks Elliot is on morphine, but it’s in fact Adderall. Elliot attempts to OD out of desperation before fleeing from his father and Leon. This proves to be a foolish decision once Elliot is kidnapped by a man rocking a Walter White style hat and a black SUV. We then shift to Mobley and Darlene riding public transportation, she hardly being torn up by Romero’s death, he being traumatized. They seem to have reached a crossroads regarding their next move to make.

What’s fascinating about Mr. Robot is the whole “unreliable narrator” component. While we assume everything witnessed is actually happening, Elliot’s mental state leaves certain scenes unclear. His kidnappers force feed him some type of wet concrete which forces Elliot to regurgitate his pills. In a revolting scene, Elliot eats some of the Adderall that he threw up. Could’ve gone without that. But I have to wonder as to the validity of kidnapping scene – why would Elliot be immediately tortured without any questions asked, and why would they release him so quickly? Hopefully this will be clarified in time.

Romero’s house is investigated following his death. They know he’s a hacker and had previously served time for computer offenses. When attempting to recover his files, they burst into flames. What happened to Romero has made Mobley paranoid, arguably in the same ballpark of paranoia as Elliot. He believes it’s possible Elliot or others have spoken to authorities, and he plans to leave the area since he’s fearful for his life. “Be cool,” Darlene tells him, hardly a likely scenario given the state of his discontent. “I don’t trust her or her crazy ass brother” is the line Mobley delivers once she leaves. It appears the legendary hacking team is falling apart.

A character who has an unclear role and level of importance is Ray, the Craig Robinson played individual. I’m not entirely convinced just yet that he fits the Mr. Robot vibe, but I’m willing to see how it plays out. He’s obviously having some sort of computer/website issue since he’s going around town hoping to have his “migration” problem fixed. An unlikely candidate at the current moment is Elliot given his severe drug use. He has temporarily managed to rid himself of Mr. Robot, but who truthfully believes this will be a long term reality? Elliot is only in a high level mood without the constraints of his imagined father because of high volume drug use. Not exactly a regimen that’s built to last.

Watching Elliot fall deeper into his chaos presents the audience with a pertinent question – what is Mr. Robot about, the corrupt financial world being evened out by vigilante world class hackers, or an unstable individual’s descent into panic due to his mental health issues? Naturally, it’s an element of both, but early in Season 2 we have a greater emphasis on Elliot’s state of mind than fsociety’s efforts. We also have the possibility that he was involved in Gideon’s death since he makes a comment about guilt over the murder.

One of Elliot’s greatest moments of Mr. Robot is his anti-religion rant during a group meeting. Perhaps the group leader asking him to share was a mistake… Nevertheless, he makes a range of excellent points, ones that would seem to end his days with these people. Elliot doesn’t typically speak for a lengthy period or reveal to others his inner thoughts. That’s why he wishes he didn’t share those thoughts aloud instantly after he finished them.

Ray and Elliot meet. There was an earlier scene of Ray talking to himself as he was eating breakfast while hooked up to his dialysis machine. Ray tells Elliot that his wife died a few years ago and pretending that she’s on the receiving end of daily conversations helps him cope. The takeaway here is that Ray has developed a systematic routine to assist his pain, something Elliot has yearned for since Mr. Robot began. Although familial death and mental illness aren’t exactly compatible in terms of self-created treatment.

The meeting between Ray and Elliot shifts to a different location. Perhaps this means Ray is growing on Elliot and his persistence is starting to pay off. They have a profound discussion on “control,” a central topic to Mr. Robot. Elliot is always attempting to control his thoughts, his demons, his life. Ray states that control is more mythic based than anything else, far from the tangible and physical force that we envision it to be. Once Ray stands after challenging Elliot to a game of chess, Mr. Robot appears, and another mesmerizing season of television quality is solidified.