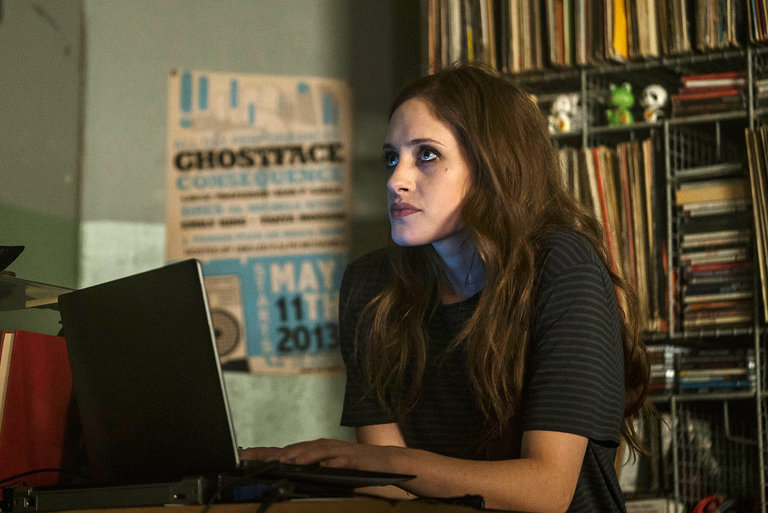 Mr. Robot has still left a sour taste in my mouth from its previous episode. The revelation that Elliot had created an elaborate deception in his brain – Ray, confinement, and more were all loads of BS our protagonist invented while in prison – felt like a literal gut punch to this weekly review writer. What a terribly lame development that was.

But alas, here we are again, eager to witness if redemption will be claimed. Darlene dominates the beginning of this Mr. Robot installment with her hacking buddies. It’s been a significant amount of time since Elliot walked the frontlines with his f-society pals. Darlene has basically taken over his leadership role. She was always the more vocal of the two – she just now happens to be the action-based sibling as well.

As Darlene treks away in the hacking world, Angela roasts a common man who dares to speak against her. He had criticized her for joining the company that killed her mother only to then be royally dismissed with the quickness. We later have Angela singing melancholy karaoke as the backdrop to f-society’s efforts. Even when Mr. Robot lags or lacks cohesion on an episode-to-episode basis, it’s still terrifically weird. I mean that as a positive. This season has been incredibly sporadic yet its unique and weird quality as a show remains a memorable aspect.

Where’s Elliot? That would be a fair question even deep into this episode. Mr. Robot sometimes treats Elliot like an awesome pair of shoes you love wearing but don’t want to scuff up. That is, you want to wear those shoes all the time since they’re fantastic and dope, but you can’t live with yourself if they get messed up. Well, the beauty for Mr. Robot is that its protagonist is a television character AND NOT A FREAKING PAIR OF SHOES. More Elliot, and fast. He’s the show’s biggest strength, and the second largest positive is when Elliot and Mr. Robot are on screen together.

This episode, which I need not remind you follows a massive shitshow from the prior week, abandons Elliot throughout most of it. Choices are everything, and Season 2 is on an undeniable streak of crazy decision making.

All that stated, Darlene attempts to save this episode. Her scenes dealing with the woman whose apartment she had been occupying are especially strong. No one holds a grudge like Darlene. This grudge eventually leads to murder, yes, Darlene has officially started a kill list. She jolts the woman and causes her to die in her own pool. Call me sadistic, but I enjoyed this scene because it was realistic. It wasn’t the safe/cop-out route that too many TV shows are taking these days. Someone who held life-or-death information against f-society was handed death, a cold yet realistic result.

Of course, a dead body leaves inevitable question marks. Darlene is left with figuring out how to dispose of the corpse if at all. She and her f-society comrades had been using a second home that’s now a serious crime scene. Delivering her to a dog pound sort of place and burning her remains in private wouldn’t have been my guess, but that’s how it went down.

Later on, Mobley is picked up by the FBI. Dom wants the whereabouts of Tyrell or anything else of value. This tells me that Mobley is certainly someone they’re interested in even if they don’t have anything credible to hang over his head. He refuses to talk and asks for a lawyer. It’s then revealed that Mobley waited/was held for a total of 12 hours and (as I assumed) the FBI had nothing on him. Nevertheless, being questioned by the FBI is nothing to take lightly and it only increases the already present paranoia within f-society.

Are we about to finish an entire episode without seeing Elliot? Is anyone else infuriated by this? I know that I’ve been hard on Mr. Robot over the past couple of weeks, but that’s for two reasons. One – I have high TV standards. Two – throughout Season 1 and part of Season 2, the show was meeting those standards. A dip in consistency has altered my perception of the series even though I’m still prepared to ride it out. Featuring an entire episode without Elliot is the type of decision that contributes to such a dip.

Mr. Robot does finish with tension here, at least. Darlene finds out that her on-and-off lover is a snake in the grass which leads to her smashing him in the face with a baseball bat. With a bang, the episode ends and utterly shocks and disappoints me by not including Elliot. A drastic improvement on the prior week to be sure, this can’t be dismissed, but we’re still looking at back-to-back blah/sigh episodes (just for different reasons).