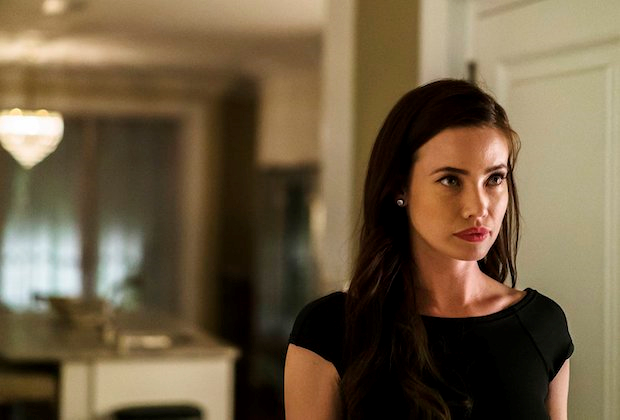 Mr. Robot opens with Terry Colby’s “trending on Amazon” book. Oh, how impressed we all are. Rich and corrupt men talking is a tremendously unappealing aspect of the show. We then shift to Joanna caking herself up as loud and aggressive music bangs in the background. Picking up from where we left off previously, Elliot is with Joanna. She, as one could predict, inquires about her husband. Elliot rejects her offer to which she replies in a sensual tone, “Do you really wanna say no to me?” Sounds like a threat…

Darlene is one cold individual. She reminds me of a Breaking Bad scene which involved Walt and Mike where half measures are discussed – a half measure basically being a middle ground decision that leaves room for doubt. During Season 2, Darlene has largely avoided half measures, with murder and potentially letting someone helplessly die be full blown tactics rooted in coldness and desperation.

A moment of ranting. Does anyone else feel like Mr. Robot has wandered during Season 2? The storm has passed of Elliot’s ridiculously untimely mental fabrications that betrayed the audience, but even since bouncing back from that plot debacle, Mr. Robot still presents plenty of scenes that leave something to be desired.

Dom has the classic “me versus everyone and everything” vibe going on. Kind of a cliché plot point, however, Dom is a decent enough character that this isn’t bothersome. This aspect is cliché in the sense that far too many shows feature that one detective or investigator who holds a certain stance that clashes with those around them only to be vindicated in the end by being right the whole time. Mr. Robot won’t allow a full circle cliché to occur on that level, but it’s still a dynamic that’s in the realm of formulaic predictability.

Darlene tells a strange kidnapping story as we shift between that and Elliot being hounded by Joanna’s right-hand-man. Perhaps this is meant to plant the seed of why Darlene has trust and temper issues. Once her story is finished, Mr. Robot focuses on Elliot’s ground work which is designed to make it seem like he’s searching for Tyrell. We haven’t actually seen a corpse or been given a concrete story behind the often discussed murder of Tyrell. That and Elliot’s newfound doubt means perhaps the American Psycho-ish character is still alive. Clarity is not typically something the show provides.

The FBI knows who Francis Shaw is… Darlene’s on and off boy toy has his face all over the news and he seems oblivious to this fact. This could spell terrible news for Darlene.

Elliot and Angela meet on the train. She asks him why he started f-society, and discusses how Dom is right on her trail. I would venture to say Dom might be the smartest character on the show, or at least the second most intelligent behind Elliot. Her scenes of putting the pieces together are genuinely interesting even with the aforementioned cliché aspect accounted for. Meanwhile, Angela opens up about her fears and says that she’s already hired a lawyer due to her hacking involvement. She also tells Elliot that he needs to distance himself from Mr. Robot.

For the first time all season, I want to scream at the TV. The root of this desire is to alert Darlene that Dom is about to be up her ass. Darlene has been a dope character from day one and her getting shafted isn’t something the audience should find appealing. Angela and Elliot share a kiss before going their separate ways, maybe for the last time. Angela was always in over her head and involving herself in the hacking world was a doomed decision from the start.

Dom enters the restaurant where Darlene and Francis are dining, but a more dangerous threat presents itself directly after. Two individuals on a motorcycle pull up and fire into the establishment. Dom manages to hit the gunman before the arriving officers finish him off, and the other criminal flees. Was Darlene hit? Who inside the restaurant is still alive?

Until next week, we wait.