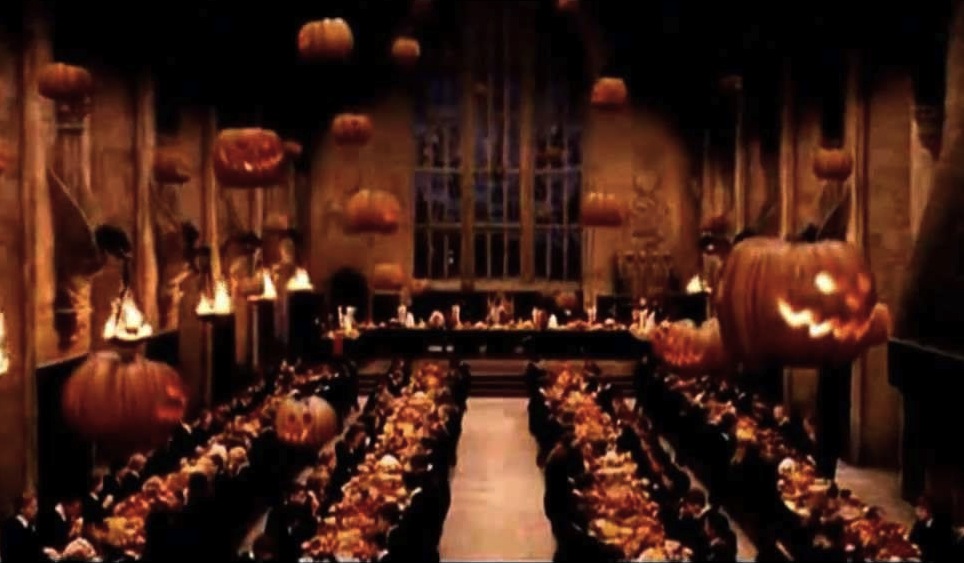 Halloween is my favorite holiday. Candy, costumes, and, formerly, Harry Potter weekends on ABC Family. It’s strange, but whenever I think of Halloween Harry Potter isn’t far behind. This is particularly strange because it’s not as if Harry has the best Halloween track record. In fact, I would probably go so far as to say that Harry, at least in his first 17 years, hated Halloween. Sure, the Hogwarts Halloween feast is lit (pun intended), but other than delicious food Harry didn’t have much to look forward to when the spooky holiday rolled around. Let’s take a look at some of his Halloweens, ranked from worst to “best”:

*Disclaimer, from books five and on Halloween isn’t directly mentioned, so I had to do some investigative journalism. By this I mean I read a solid chunk of books five through seven, noting any dates or passage of time (e.g. a “few days” = 3-5), and getting thoroughly distracted by how much I want to reread the series. My parents will be thrilled to see that my journalism minor paid off.

8. Halloween, 1993: During Harry’s third year everyone is in a tizzy due to Sirius’ escape from Azkaban. So when Halloween and the first Hogsmead trip of the year (and the very first for third year students) roll around, Harry isn’t allowed to go. Having your friends be able to go to somewhere really cool and eat lots of candy while you’re stuck at school is basically the worst thing that could happen to a 13-year-old. FOMO is real, people. As if it couldn’t get any worse later that night Sirius attacks the Fat Lady after she refuses him entry to the Gryffindor common room. Remember, at this point of the book everyone thinks Sirius is trying to kill Harry. So now, Harry is terrified for his life, and he doesn’t even have the memory of drinking butterbeer at the Three Broomsticks (where they think they saw an ogre!) to console him.

7. Halloween, 1994: Usually Hogwarts’ Halloween feast is an event in its own right, but for Harry’s fourth year it’s only a small part of a bigger event. Thanks to the Triwizard Tournament, the Halloween feast is actually the second feast of the week – which Harry, practicing for all the whining he does in book five, actually finds a way to complain about. Woe is he. But then his name gets inexplicably picked as a champion, which gives him something to actually be worried about. Moody/Crouch poses that someone (Voldemort?) planned the whole thing – side note, why do villains always give away their plan? And yet, everyone refuses to believe that Harry didn’t put his name in the Goblet of Fire. So everyone is pissed, including Ron. Dumbledore (if you’ve only watched the movies) yells at him, and Harry is forced to fear for his life yet again. Woe actually is he.

6. Halloweens 1982-1990: Nothing is said about Harry’s Halloweens pre-Hogwarts, but we can assume it was much like the rest of his childhood with the Dursleys: gloomy, and not in a good way. Dudley and his parents, decked out in elaborate coordinating costumes, go house to house, while Dudley demands more candy from each one. Harry undoubtedly stays at home, under strict orders to pretend no one is there, lest him attempt to enjoy the holiday vicariously by handing out chocolates to other children. Dudley then comes home and eats each and every piece of candy in front of Harry, not even allowing Harry to eat his raisin rejects and throwing them in the trash instead.

5. Halloween, 1997: The last Halloween of the series (that is unless you’re counting Cursed Child as part of the series, which most people aren’t) is best described as bleak. It’s not so shitty that it’s worse than all the Halloweens where Harry thinks he’s about to die, or that it’s worse than a little kid not being allowed to have fun. But it also doesn’t really have any high points that make it more than just another day in a blur of days. Harry and Hermione are camping somewhere in the English countryside, missing Ron. Each day passes like the last, sitting in silence as they play a terrible game of hot potato with the Horcrux’ed locket. Then day turns into night and Hermione cries herself to sleep, continuing the cycle until they’ve lost track of dates and time. See? Bleak.

4. Halloween, 1995: Year five’s as good a year for Halloween as it can be given the circumstances (the circumstances being that Harry’s to blame for Cedric’s death and is trying to make out with the dead guy’s girlfriend). Harry’s happy and distracted enough that he takes a miniscule break from all the bitching he does that year. He’s running Dumbledore’s Army, whose members are finally not sucking. He’s busy with Quidditch practice for the upcoming Gryffindor-Slytherin game. McGonnagal even gives them a homework break for the entire week leading up to the Cup, which falls just five days after Halloween. It would be the perfect and ideal Halloween to make up for all the other awful ones if it weren’t for the worst villain of the SERIES running the school. Minus fifty thousand points for Umbridge’s presence alone.

3. Halloween, 1992: In Harry’s second year he gets invited to a friendly ghost’s (not Casper but Nearly Headless Nick) death day party, which happens to be at the same time as the Halloween feast. Hermione makes the reluctant gang respect their RSVP and skip stuffing their faces to watch ghosts float through rotting food instead – without Hermione Ron and Harry would just be a pair of assholes, but more on that in a bit. The boys leave the party hungry and miserable, and run into a recently opened Chamber of Secrets. The first time in fifty years. Luckily no one is dead (got to look at the silver linings, something Harry’s not too great at) and Mrs. Norris is merely petrified. Which could’ve been another silver lining since she’s the only cat I’ve never been fond of, if Filch hadn’t tried to pin it on Harry, who’s also not too fond of her.

2. Halloween, 1996: Like the previous year, Halloween of 1996 falls just a few days before an important Quidditch match. Except this year Harry, now Gryffindor’s captain, isn’t so sure that they’re going to do so hot. Ron is mad at Hermione for kissing Krum two years ago (boys are dumb), and whenever Harry’s besties are fighting it seems that everything else in his life starts to fall apart as well. By the time Halloween rolls around Katie Bell has been hospitalized, the team is contemplating mutiny, and Ron is playing keeper about as well as a piece of Swiss cheese. I bet they were too stressed to even go carbo-load at the Halloween feast.

1. Halloween, 1991: During Harry’s very first Halloween feast at Hogwarts Professor Quirrel/Voldemort releases a troll in the dungeons. Which altogether wouldn’t really affect Harry, besides cutting the feast short, if he and Ron hadn’t sent Hermione crying down to the dungeon bathrooms – sometimes I wonder why Hermione even became friends with the two of them, they were such dicks in the first book. They LITERALLY almost killed her. Luckily the two of them realize that maybe they should stop being pieces of shit, and manage to get down there just in time to save her life. So on the one hand, Harry and Ron are eleven-year-old heroes, but on the other hand they also got their future best friend/wife killed. Which I guess epitomizes everything Harry’s ever done better than anything. Twenty points to Harry for fixing the mess he made in the first place!