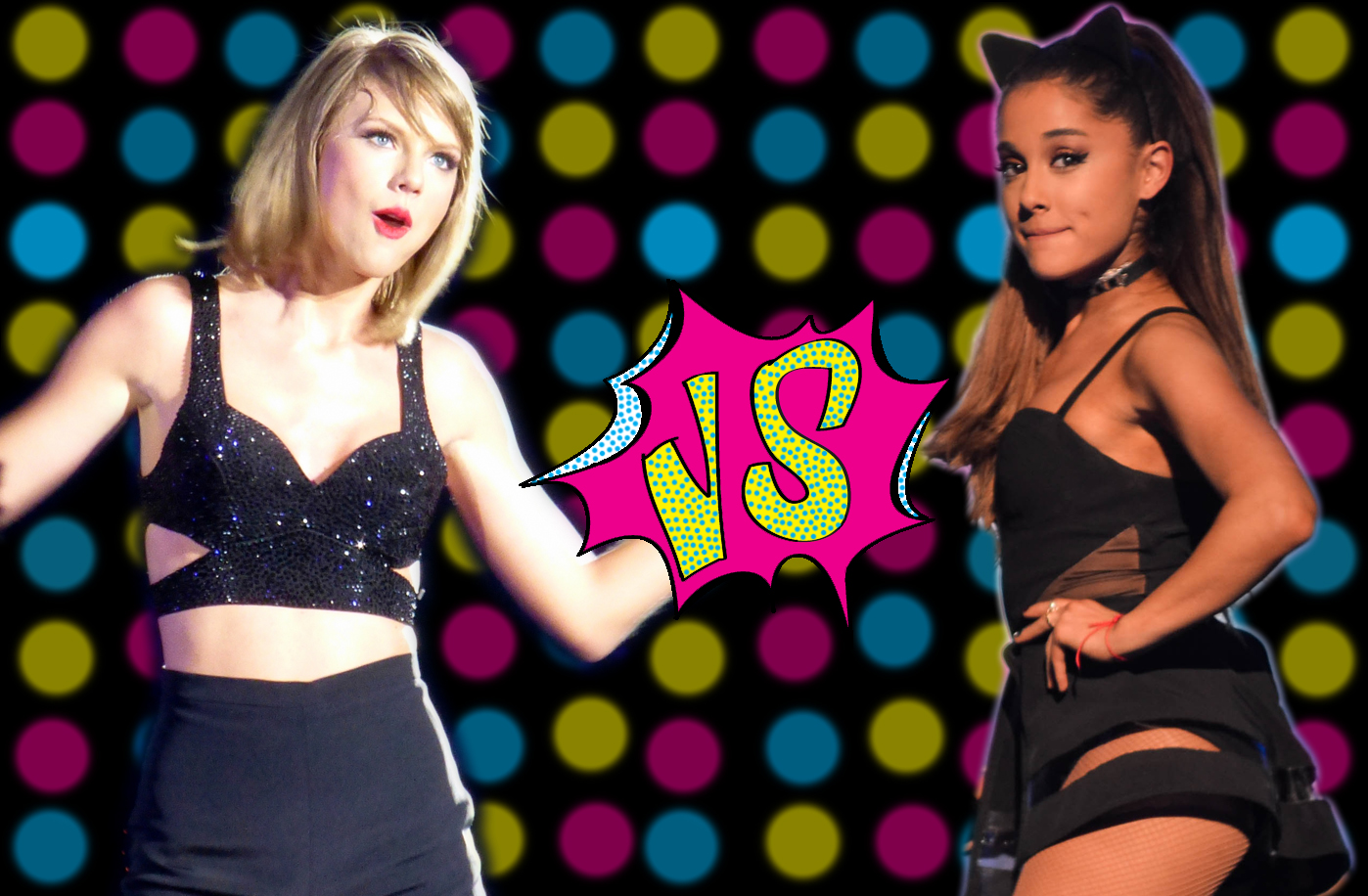 I love celebrity gossip. Also, thanks to Sonny, I now know that WWE is incredibly entertaining. These are not things that can usually be enjoyed together (unless the Rock is involved, one of the reasons the Rock is a perfect angel). But what if they weren’t so mutually exclusive? A Friday-night event where two celebrities meet in a ring and fight for the championship.

There are some pretty obvious fights that would go down: Tom Hiddleston and Calvin Harris (Tom would totally win, he’s a supervillain and a god), and some less obvious ones: Emma Watson and Emma Stone (to settle once and for all who’s the best Emma, Watson would avada kedavra Stone’s ass). But that’s not the fight I would shell out millions of dollars for ringside tickets. No, the fight I’d most be excited for is Taylor Swift vs. Ariana Grande.

There are a few things that, in my opinion, make or break a WWE fight. I mean, besides their ability to fight that is. Part of WWE’s charm is the theatrics, which makes it the perfect platform to incorporate celebrities, whose job description is theatrics. Taylor Swift and Ariana Grande are very big fans of the theatrics.

With both girls it’s hard to tell whether they’re a sweet girl next-door or an undercover mean girl. Grande’s career has been plagued by rumors of diva behavior, which only heightened after donut-gate. Swift, on the other hand, has only recently faced drama amid her breakup with Calvin Harris and her feud with the Kardashian-West clan. They’re both conniving enough to make you question which side to believe, and certainly enough to win a catfight. But who would leave the ring with the belt? Well there are a few other things we have to consider…

Entrance: In WWE an entrance is almost as important as the actual fighting. Taylor Swift would definitely use her own music as her theme – probably Bad Blood. She’d use all possible fanfare available to her: fireworks, strobe lights, smoke machine, the works. She’d also be accompanied by her Bad Blood squad, each whom she’d fake punch out on the way to the ring just to show her authority and general scariness. Ariana Grande would start off with a few hair flips, a wink, and a kiss to the audience. She’d then slow-mo walk (an effect she does by herself, since it’s filmed live, of course) to the ring, where she’d finish off with some writhing around, one last hair flip, and a seductive look straight into the camera. Her theme? Zero to Hero, from the movie Hercules. Girl loves her Disney music, and it’s actually a really excellent song, but it’s not exactly an intimidating choice.

Athleticism: Both girls can kill some dance moves in extremely high heels, which is more impressive than anything any athlete has ever done. Oh cool, Odell Beckham Jr. caught the ball with one hand? Try it in heels. Both seem to be in decent shape, though the only time Ariana Grande is pictured in athletic attire it looks like the kind of athletic attire that’d be ruined by actual sweat. She does, however, have a video where she rides a stationary bike, the most awful form of exercise. On the other hand, Taylor Swift is frequently pictured leaving the gym – albeit rarely looking sweaty. Swift also has a commercial where she runs on a treadmill. In which she falls. Taylor Swift’s gangly legs mean that she’s often like Bambi learning how to walk. All it would take is a sneaky foot in her way and Swift would come tumbling down, tangled up in her spindly limbs.

Build: Ariana Grande is tiny, so tiny that Swift could probably snap her in half without any real effort. Taylor Swift, with her Amazonian legs, literally towers over her. I wouldn’t be surprised to learn that Swift’s reach is the length of Ariana Grande. And though neither one of them hold a candle to Ronda Rousey, whose bicep is the size of one of their thighs, Grande’s veganism likely means she’s got less muscle mass than Swift. Picture it, Ariana Grande, who up until now has been using the tactic “the bigger they are, the harder they fall,” tries to duck in between Swift’s legs. But Swift, who barely has to bend down to scratch her knee, scoops Grande up. She tosses her over her head, and out of the ring and onto some tables – a move she later shamelessly tries to steal and trademark as “The Swift”.

Costume: One of the best things about WWE is the costumes. But don’t expect Swift and Grande to wear the same lame, theme-less costumes the other WWE girls wear. Think of something more along the lines of Brutus Beefcake. For example, Grande, a big fan of animal ears and never wearing pants, would wear a sequined leotard that changes color in the light. Her trademark cat ears would double as a sort of brass knuckles for her head. Meanwhile Swift, who’s going through a very belated emo stage, would wear a black leather crop-top with cat shaped studs. She would accompany that with plaid shorts, black lipstick, and a glare that screams, “I’m trying too hard.” Unfortunately, mid-fight Swift’s red wig would fall off – what’s more punk rock than colorful hair, duh – providing a distraction that would allow for Grande to use her ponytail-lasso to try and bring Swift into her finishing move.

Theatrics: My favorite thing about WWE, however, is the theatrics. The rivalries, the terrible acting, and the over-the-top-ness of it all are what make WWE so entertaining. The cheesier the better. I can already see Grande, who hated playing the ditzy character Cat Valentine, breaking her back out as her ring character. And Swift, whose terrible acting has always been a delight, would fit right in – if you thought she was bad in Valentine’s Day you should see her Picture to Burn music video… it’s a whole new level of awful. That’s why none of the writers would be surprised when Swift, who’d be scripted to throw the fight once Grande pulled her into her finishing move, doesn’t fall to the floor, but instead brings Grande into her finisher, winning the match. But, SURPRISE! It wasn’t bad acting and forgotten direction. Swift planned the whole thing, just so there’d be a rivalry that would guarantee her the most rematches in televised history. Guess she decided she’s not quite that close to overexposure.