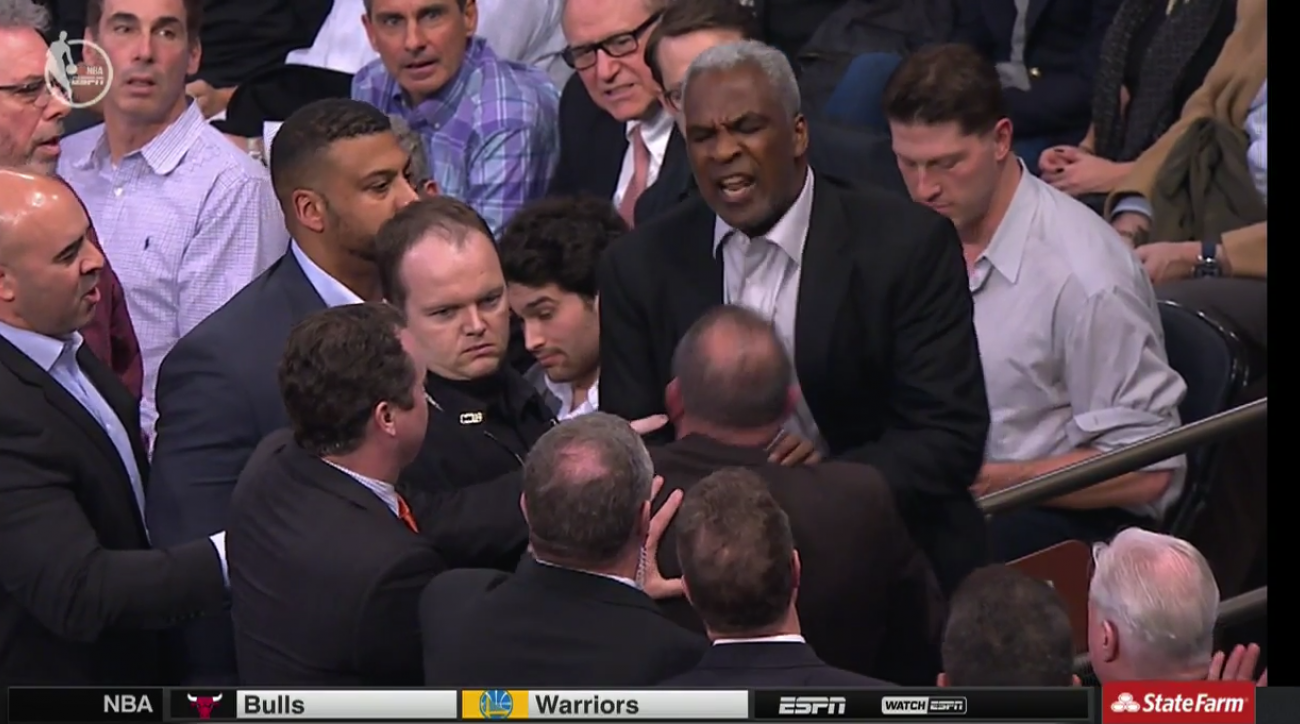 So much for James Dolan being the voice of reason. If Dolan and the Knicks wanted a distraction from the Phil Jackson and Carmelo Anthony beef–which looks like it can only be squashed with a steel cage match–they did a wonderful job last night.

The team played well in yet another national television loss, this time to the Chris Paul-less Clippers, but that is not the Knicks style. If they’re on national television they know people want a bang for their buck and they got that in the form of former Knick LEGEND, Charles Oakley.

Yes, Oak is a legend and one of the beloved Knicks from one of the three periods in which the franchise was actually winning games. Last night Oakley purchased tickets to watch the game and was seated a few rows behind Jimmy Dolan. For those that are unaware Dolan and Oakley are not on good terms because Oakley has been (rightfully) critical of how the Knicks have been run by the Jimmy Trust Funds.

According to Oakley he was watching the game when security guards approached him and asked why he was there. They asked him to get up and leave leading to this:

Soooooo Charles Oakley just got into a fight at he Knicks game. pic.twitter.com/klZBD89VI7

First off, those security guards need a raise. I want no parts of telling Oak he has to leave anywhere. I sure as hell do not want to get into a shoving match with someone so tough Michael Jordan doesn’t even talk shit to him. You can see Dolan scurry off at the 52 second mark of the video at the bottom of the screen while his security gets tossed around like storm troopers.

Phil Jackson tried to calm Oak down in the tunnel but according to ESPN’s Ian Begley you could hear Oak yelling “Dolan did this”. Oak was not only taken out of the arena, but arrested although he was not charged.

The team did however issue this disgusting press release:

Following his release Oakley gave his version of the story and said he would continue to root for the Knicks.

Here's Charles Oakley giving his version of the events after being released from police custody:

This is yet another example of how toxic the organization truly is. For one the Knicks should be welcoming any former player with open arms, they should not have to pay for a ticket. Secondly, how does the handling of this situation look to prospective free agents? If Dolan, Jackson or anyone within the organization thinks a top free agent would join a culture that treats their players–current and former–like dog shit they are more delusional than most feared.

It goes to show you that Jackson is far from the only problem making the Knicks look like an undesirable destination. Beat writers have been saying it for a while, but last night gave us a peek into how bad things really are. If there was any debate on what the team should do for the remainder of the season it should be glaringly clear now–tank. There is no way in hell a top free agent is taking a meeting with Jackson or Dolan. And there is no way in hell the Knicks will ever be a marquee franchise with James Dolan running the show.