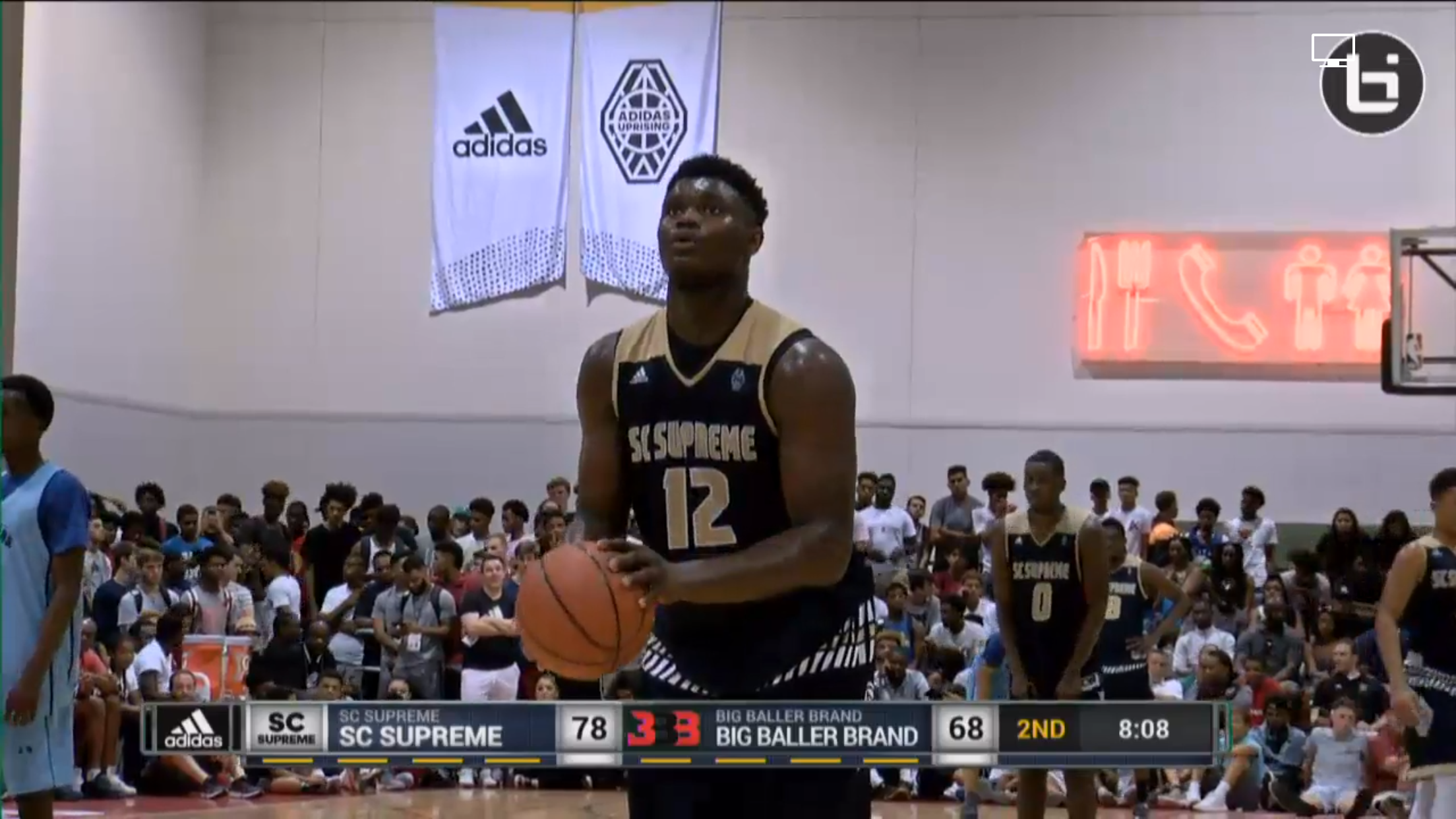 Had to stay up last night to 2am EST to watch the hyped-up Big Baller Brand vs. SC Supreme AAU game last night because of basketball prodigies, Zion Williamson and LaMelo Ball. I’ll start my take with Zion first. Dude is a monster with some ridiculous agility. Of course you’ve seen the highlights of him cramming it, right? No? Well, here…

Despite the devastation he puts on rims whenever he walks on a court, Zion also has a grace about him on his finger rolls. BUT, he can also look very erratic/unbalanced when taking it to the hole. Williamson literally tries to dunk everything, which is great, but he looks like he’s still trying to find that middle gear between power dunking and finessing.

I have no doubt Zion will find a way, but he blew a lot of “and-1” possibilities that a guy with his obviously formidable strength should have converted at the cup. Zion finished with 31 points, shooting 75 percent from the floor (12-for-16), but 7-for-20 (35 percent) from the stripe. I think he was just off tonight because his form isn’t Lonzo Ball bad, but it’s obvious he has that Hercules hitch, meaning he’s so strong, he’s consciously throwing it up lightly, which makes his shooting fingers tense on the release.

Williamson still has time to work on his shot though and I can see him being a consistent 15′ shooter with the possibility to stretch his range to the college three. His ball-handling is just good, plus for a big, but he definitely needs to work on his dribble through contact to get better. He has some nice passing potential. As far as defense goes, hard to tell because AAU at this level usually isn’t exactly known for it, so I have nothing of note on his man-to-man ability, switch skills, or help defense instincts. 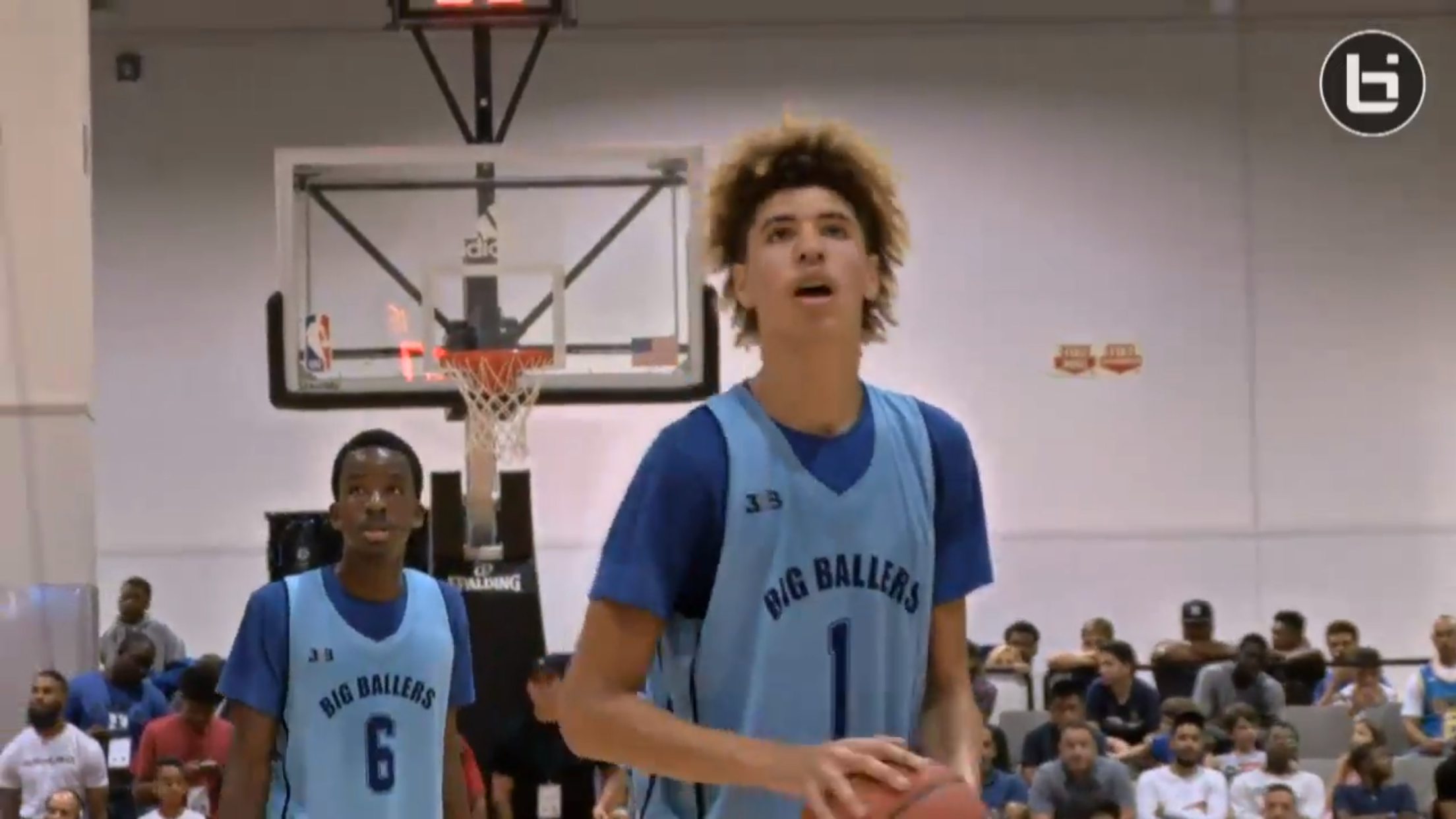 LaMelo is the guy you probably don’t want on your team because he’s a crazy volume scorer. The classic chucker. However, despite misgivings before a theoretical game, during it you may be fine with it because LaMelo can hit shots. He finished with 36 points, going 13-for-16 (81.3%) from the line, 7-for-15 from two-point range (a good 46.7%), and a horrendous 3-for-12 (25 percent) from beyond the arc.

Ball will either piss you off or make you nod your head and think, “Okay, that boy good.” His shot selection can be very questionable (shooting consistently from 30+ feet away), but it can also be a source of awe when he makes them. Very polarizing player.

LaMelo oozes potential offensively because he can also pass the rock like his brother Lonzo when he wants. But, that’s the problem… he’s got trigger fingers, and probably trigger toes. I say trigger toes because he absolutely stinks on defense, and his toes are always ready to get back on offense.

Big Baller Brand plays Chaos Defense almost exclusively and full court (it’s supposed to be a just above half-court defense), which is nuts because a lot of energy is spent. And while getting tired surely plays a factor in BBB’s defenders getting lazy, they also overpursue a lot and open up a ton of lanes throughout a game.

And no one is greater at being out of position than LaMelo, who is always looking to cherry-pick. The Chino Hills basic 2-1-2 defense last year with the “1” floating up and down is conducive to that cherry-pick working (see: LiAngelo Ball), but not a Chaos Defense. As a coach, I got mad so many times watching their lack of defense because all they needed were some adjustments to their hip position turned inside instead of out to make it work. Don’t get me started.

Anyway, LaMelo Ball can be excellent at the next level with UCLA, but depending on his BBIQ growth, he’ll be a hit-or-miss NBA prospect who will need to be in the right offensive system to succeed.