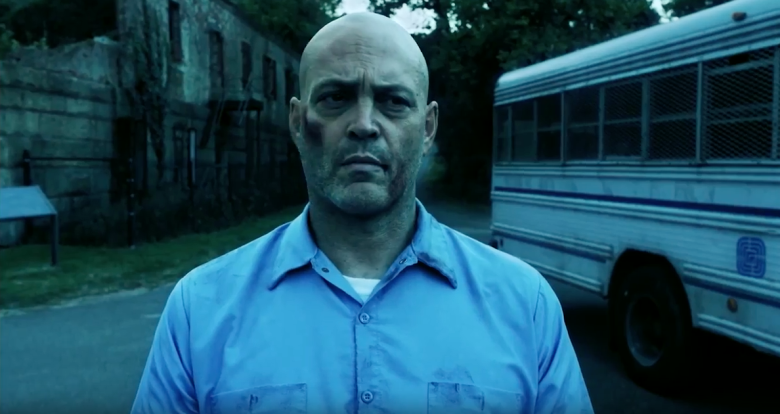 Life throws some heavy punches, like being fired from your job, unfaithful partners, and twisted gangsters. Bradley Thomas is a hard working, blue-collar man that has caught a combination or two from life, and ends up in a prison where he is forced to carry out the task of killing an inmate in S. Craig Zahler’s latest film, Brawl in Cell Block 99. Vince Vaughn stars as the former-boxer-turned-drug dealer, Bradley, and is joined by a veteran cast, including Don Johnson and Jennifer Carpenter.

Zahler pens a script that takes its time to build the main character. He allows his actors to carry the story with actions and mannerisms more so than excess dialogue. It’s a slow burn, but once Bradley starts breaking bones, it doesn’t stop. The colors are desaturated and cold, reflecting the down-but-not-out life of the ex-boxer. The choreography of the fight scenes are brutal, and messy, with a B-movie feel. It may not always seem realistic, but it’s definitely entertaining. The story itself isn’t anything new, but it is engaging enough, and sets up Bradley’s beatdowns well.

Vince Vaughn is mostly know for his comedic performances, but he flips the switch as Bradley. He plays a smart, patient man that will do everything he possibly can for his family. Vaughn, a long-time boxing enthusiast, and jiu jitsu practitioner, slugs it out in some gruesome fights. However, his dramatic scenes outshine the interesting brawls, as he really commits himself to the role of this fresh out of luck character. Life just doesn’t let up on Bradley, and once he’s pushed to the edge, he throws his opposition over it. Once he’s triggered, his intimidating silence is a warning of the carnage to come. Vaughn reminds us that comedy isn’t the only thing he can do.

Don Johnson shows up, playing an evil prison warden. He’s cool and collective, which isn’t much of a stretch for Johnson, but it’s what the role asks for. Jennifer Carpenter, playing Bradley’s wife, gives a convincing performance to round out the main supporting characters nicely.

Brawl in Cell Block 99 is a grindhouse flick with some fine acting. It develops its main character well, and although it takes a little too much time to do so, once bones start snapping you’ll know it was worth the wait. Bradley is kind of like Frankenstein’s monster, except that life is the mad scientist that created him.