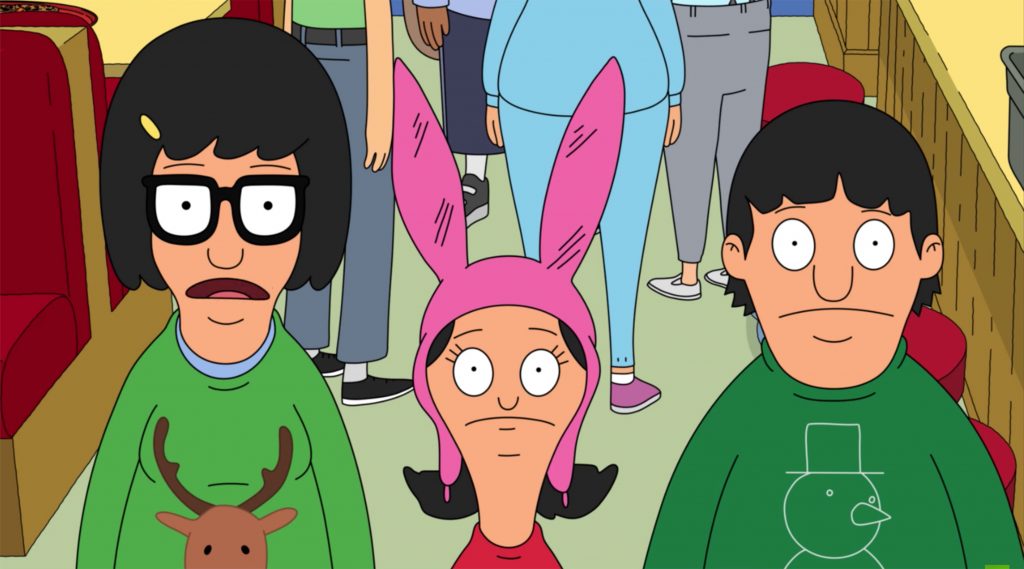 The Bob’s Burgers season 8 Christmas episode was a special hour-long musical. It went all out and even featured Adam Driver as a guest voice. Driver was fantastic as Art, holding his own with the impressive regular voice cast. The episode captured a joyful Christmas spirit. Bob’s Burgers is the rare show that can romanticize the holidays while still feeling realistic. It doesn’t brush over how annoying the holidays can be. Instead it shows the beauty of having stress and difficulty in your life, but managing to celebrate anyway.

In a particularly well-plotted story, the Belchers tried to figure out who stole their tiny Christmas tree. The subplot about the kids searching for the Bleaken was great. I love plots that show off Louise Belcher’s intensity while also painting her as a true little kid. This plot was a reminder that she still believes in magic creatures that steals presents. The animation of the Bleaken was fantastic. So, were setpieces like the realistic mural and the staircase that hides another staircase. The two plots tied together in a very satisfying way. The that’s-so-Teddy c-plot where he spent his Christmas even hidden inside an inflatable Santa also paid off perfectly.

The repeated references to what a hard year it’s been throughout the episode rang true. Without getting caught up in being topical, it captured a spirit of hopelessness. This made the celebratory moments even more exciting. Bob’s Burgers succeeds because of it’s quirky and modest spin on family joy. The Belchers spent their Christmas Eve in a creepy, dark warehouse, but that was portrayed as sweet because it was a result of how much they all cared about Linda Belcher’s attachment to her stolen tree.

The original songs in “The Bleakening” aren’t quite as great as the ones featured in “How Bob Saves/Destroys the Town” or “Glued, Where’s My Bob?” But, they’re catchy numbers that added some extra fun to the episode.