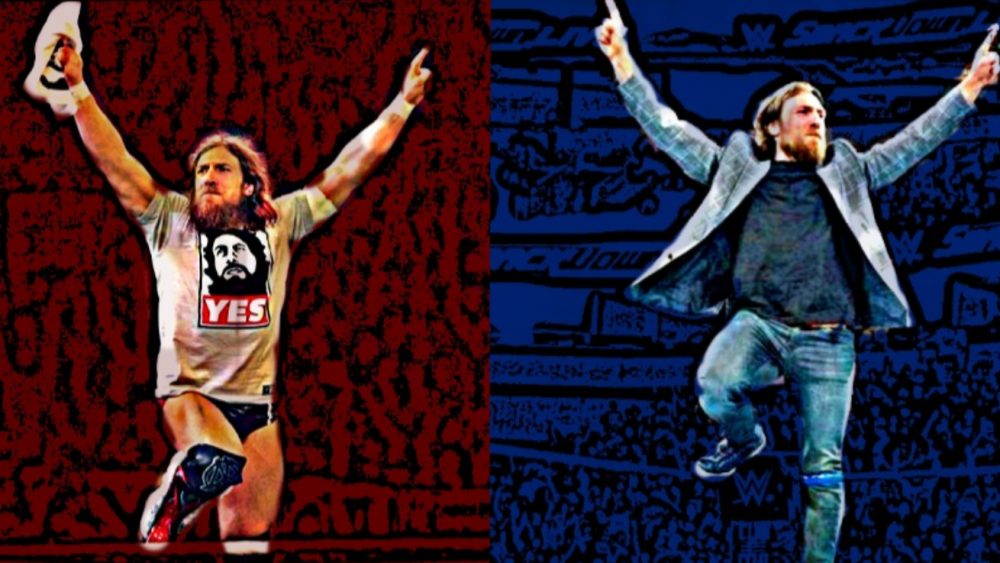 Six years ago I was on-hand for WrestleMania 28. It remains the greatest sports (entertainment) event I’ve ever been to, and I’ve recounted this one particular moment many times in the past, and perhaps you’ve heard the story already, but I feel compelled to recall it right now because it remains very important. It’s almost as if I wrote the following paragraph intending to be symbolic, but I swear to God I wasn’t at all. I couldn’t have been symbolic if I tried.

I maintain the belief that the Yes Movement truly began the night of WrestleMania 28. Nobody there in Miami knew what it would become, but we knew the potential of Daniel Bryan. He knew he was a guy who had wrestled his ass off all over the world. We knew he was deserving of any WWE success that came his way because he was an artist in the ring. And we knew that it was bullshit that he lost to Sheamus in 18 seconds in the opening match of WrestleMania 28. We knew he deserved better than that.

What we didn’t know was how much louder those “Yes!” chants would eventually get. We didn’t know that those chants would become the rallying cry of a movement, just like we didn’t realize that this movement had been established as a grassroots campaign years before most fans even knew who Daniel Bryan was. We didn’t realize that the way those “Yes!” chants kept popping up that night would come to symbolize Daniel Bryan’s rise altogether.

Each time a new chant would pop up during WrestleMania 28, the crowd would eventually go back to chanting “Yes! Yes! Yes!” The chants wouldn’t go away. Even during the brutal “End of an Era” Hell in a Cell match between Triple H and The Undertaker and during highly-anticipated “Once in a Lifetime” main event match between John Cena and The Rock, the “Yes!” chants didn’t stop. Even the next night on Monday Night Raw, that rowdy post-Mania crowd wouldn’t let those chants die.

For the first time, the WWE audience was responsible for real change within WWE. For the first time, their underdog was an underdog in life. Bryan was the everyman who spent years grinding in gymnasiums and rec halls for little known wrestling promotions without recognition. He was the workhorse who was held down because he didn’t represent the status quo. This wasn’t a Stone Cold Steve Austin reboot, where WWE had spent the better part of a year grooming him to carry the ball as the anti-authority face of the company. This was a fanbase getting behind a man and willing him into the Main Event spot because they were sick of the status quo and they knew Daniel Bryan deserved it; an appropriate manifestation of the storyline since Daniel Bryan had been be fighting and willing himself into relevancy for years already.

But even in Bryan’s two-plus year absence, his presence was almost always felt. He soon became on on-screen character as the General Manager of Smackdown Live. His ascension in 2013 feels like the reason WWE has given guys like AJ Styles, Finn Balor, Kevin Owens and Sami Zayn a chance to be main event players. And of course, the “Yes!” chants never stopped. Night after night. City after city. Show after show. Even when it wasn’t Daniel Bryan in the ring on the microphone playing GM, the fans never quit chanting “Yes!” And as we would eventually find out, Daniel Bryan never quit fighting either. He kept training for his eventual in-ring return. He sought out every doctor he could find who would give him a clean bill of health. He continued working, bugging WWE to reconsider his case. Just like the “Yes!” chants at WrestleMania 28, Daniel Bryan would not go away. Finally, on March 20th, 2018, Daniel Bryan was cleared to return to in-ring action for WWE.

When Bryan stepped in the ring on Smackdown to formally announce his return, the tears that flowed down his face were real. The excitement from fans was not just a selfish, “We get to see one of the best wrestlers in the world wrestle again” excitement. It was a “We saw this guy give everything he had to this profession only for it to be taken away, and now he’s getting it all back and that feels really fucking good,” excitement. And frankly, that was the first time I had ever felt that way watching WWE.

With that said, I’m afraid that WWE is going to find a way to mess this return up. Daniel Bryan looked fantastic last night at WrestleMania 34 teaming with Shane McMahon against Kevin Owens and Sami Zayn, and as would be expected, he got by far the biggest pop of the night, but I can’t shake the feeling that we won’t get so lucky this time around. WWE nearly screwed up Bryan’s wave of momentum in 2013, when it seems unthinkable that anybody could have thought that anyone else on the roster was a bigger star than Daniel Bryan. It took CM Punk walking out of the company and a truly heroic tag-team effort from Bryan and crowds across the country for Bryan to be rightfully inserted into the WrestleMania XXX main event.

We shouldn’t be surprised. Just like the “Yes!” chants at WrestleMania 28, Daniel Bryan is never going away.