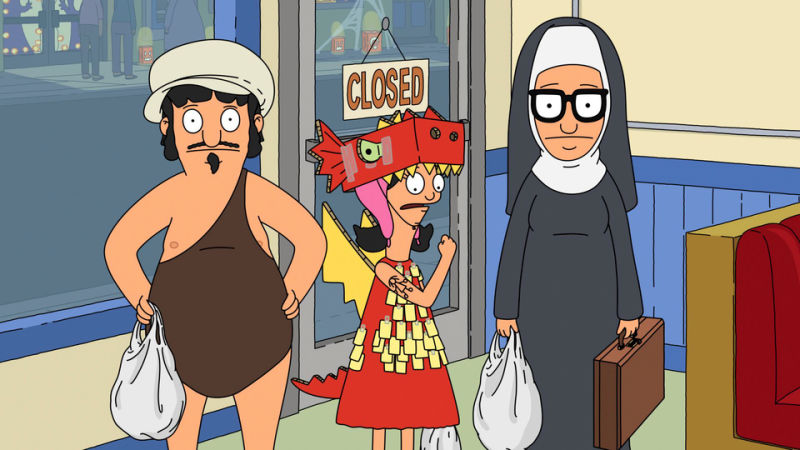 The Bob’s Burgers season 9 Halloween episode was a little bit of a let down. Past episodes of Bob’s Burgers have been some of the show’s best. So, this episode disappointed.

This season, the street that the Belchers live on had their first ever Halloween Walk. This meant the kids were just trick-or-treating at the local businesses. It felt odd, after so many more exploratory and elaborate Halloween episodes, to have one with the very simple concept of the kids walking around the usual environments trick-or-treating. It needed some sort of extra unexpected direction.

The kids had their candy stolen by a series of masked bandits. It turned out the thieves were all one person— Dr. Yap. He was trying to save them from this year’s most popular candy, which was extra bad for teeth. The ending was fun, but there wasn’t enough of a build up to really make the turn satisfying.

Meanwhile, Teddy felt competitive with another handyman, voiced by guest star James Adomian. Watching Bob Belcher get really into the competition— and argue with Teddy over whether the other guy was handsome— was fun. But, like the main plot, there wasn’t enough of a gradual build to really get sucked in.

The highlight of the episode was, of course, all the costumes. All three of the Belcher kids were wearing pun costumes. Gene Belcher was “Andre the Giant 3000,” Louise Belcher was “a dragon with a girl tattoo,” and Tina Belcher, wearing a nun costume and carrying a briefcase, was “nun of your business.”

But, my far the best costume was Regular-Sized Rudy. He went as Paul Rudd in I Love You, Man. He was completely oblivious to why the other kids were skeptical about a gray sweater, button-up shirt and jeans being an iconic costume. That’s relatable content.

Check out my review of last week’s episode of Bob’s Burgers.