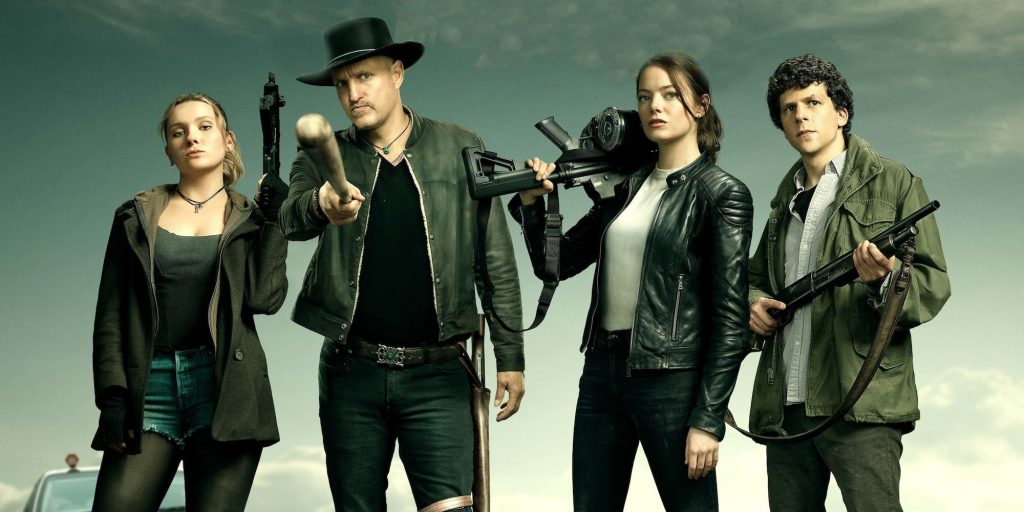 Rewind to 2009 and you’ll recall a zombie horror comedy that gained a cult classic status that became known as America’s Shaun of the Dead (but not as good). A decade later, we finally get director Ruben Fleischer’s sequel dubbed Zombieland: Double Tap. Tallahassee, Columbus, Wichita, and Little Rock crash in the White House and continue their adventure dealing with other survivors and an evolved zombie type nicknamed T-800. The whole gang is back, including Woody Harrelson, Emma Stone, Jesse Eisenberg, and Abigail Breslin. And they’re joined by Rosario Dawson, Luke Wilson, and Thomas Middleditch.

Recaptures The Vibe Of The Original

Fleischer does a commendable job of capturing the same energy of the first film, dropping us right into the action with slow-motion kills and gory thrills. The script takes us to interesting places, including Graceland, but it never truly kicks it up to anything insane, as sequels should. But we do get a little more character development and plenty of sarcasm to go around.

Of course, a zombie flick wouldn’t be complete without blood splatter and a hail of bullets. Zombieland: Double Tap packs its fair share of blazing guns and decapitated heads. There’s even a lovely scene with some monster truck madness that will jack up your heart rate for a bit. Sure, the horror is lacking in this horror-comedy, but there’s a good helping of action to keep you awake.

All the original actors from the first film slip back into their roles with ease. There isn’t a weak link to be found, and the actors are having a ball in the flick. Woody Harrelson’s portrayal of Tallahassee is the best performance in the first flick and the same goes for the sequel. Harrelson’s charismatic, foul-mouthed, gun-loving Tallahassee is plenty of fun to watch because he’s a kid in a candy store in Zombieland. And, the chemistry between all the actors is still alive and well.

There’s a new character named Madison played by Zoey Deutch, and she is wonderfully inept. Deutch plays Madison as a stereotypical dumb blonde who is the target market for Victoria’s Secret’s Pink lineup. Alongside Emma Stone’s hard-ass Wichita and Jesse Eisenberg’s super dorky Columbus, Madison becomes a wonderful wrench in the crazy family. Not to mention, there’s a cameo that almost beats the one in the first movie, but not quite. Sticking around for the credits is highly recommended.

Zombieland: Double Tap is more of the same, but like a reliable cheeseburger, it delivers exactly what you’d expect. The film makes up for its thin plot with the fun characters from the original and some new ones that add a little more spice to the pot. Get your butt in a seat to see this flick if you want to have some good, mindless recycled fun.