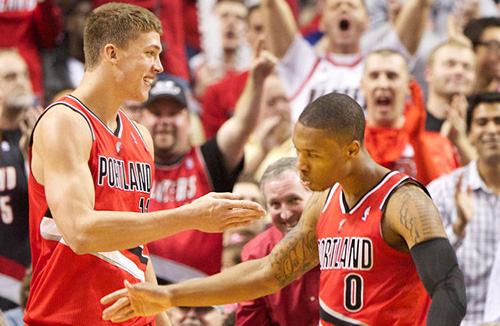 Meyers Leonard and Damian Lillard seem to be headed in different directions.

I hope I’m wrong. I hope Meyers Leonard becomes a franchise center in the NBA. I hope he inspires generations of afflicted, hard-nosed kids to take up basketball. I hope that 25 years from now, he and Damian Lillard will marshall the Rose City Parade, championship banners in tow. I hope that the Blazers draft class of 2012 will become the stuff of legend in the annals of Cascadian sport. However, after watching him play last season and listening to him asses his own ability, I can’t really believe the h(o/y)pe. Something tells me that Jeff Withey might have been that franchise center, and we’ll be stuck with the lovable Leonard, a baby-faced, non-rebounding Joel Przybilla.

Meyers Leonard is easy to like. He plays hard, says the right things, and he’s got a compelling and tragic past. Who wouldn’t want to see him succeed? The announcers herald his hustle, and the Rose Garden erupts when he blocks a shot. He’s only twenty-one, and his college stats imply that he’ll improve drastically during his second year. Every sportswriter and blogger seems to give this kid a pass based on his doe-eyed and alert complexion. I admit, it’s cute. He always looks like he just got hit in the head with a cartoon hammer. He also looks like he’s ready to learn, but does anything ever sink in?

According to Leonard, he is constantly learning. He said last month that he needs a big man around to teach him. Weirdly enough, he cited Jared Jeffries, a man with a career PER rating of 9.6, as a mentor. Granted, you might learn valuable lessons in the locker room from a veteran like Jeffries, but what kind of on-court knowledge could he hand down? How to backpedal with your arms extended horizontally in the restricted area? How to hesitate when getting an open look? With all due respect to both Jeffries and Leonard (both deserve it), maybe he should learn how to defend and rebound from somebody who can defend and rebound. All joking aside, these comments from Leonard point to something graver than an odd mentorship. Going in to his second year and earning over $2 million, he still believes he is worse than a 10-year veteran who’s averaged 4.8 PPG and 4.1 RPG throughout his career.

On the other hand, Leonard seems to have irrational confidence in his offensive game. Last season, I only remember him dunking the ball and sinking free throws. At the beginning of the summer he said, “When I’m open, more likely than not I’m going to make it when I shoot it on offense, but the defensive end is where I really have to focus and get better.” While I agree with the latter part of his statement, the first part is startling. Does he really believe he doesn’t need to work on his offensive game? If so, Blazers fans can expect 9.0 PPG for the next decade. (This is a generous estimate based on increased playing time).

All these oddities add up to long-term mediocrity. He doesn’t seem smart enough to adapt to changing sets and to properly execute a flexible game plan. While he’s got the physical gifts to become a beast on the boards, it seems like the subtleties of boxing out and timing might curb his progress. Though he excelled in his sophomore season at Illinois, I think the NBA learning curve will be a bit too steep.

I admit I don’t have statistics to back this up. Call it a hunch informed by 30 years of playing and watching basketball. I’ve been wrong before, and I hope I’m wrong again. I still believe Leonard will have a long career in the Association. He’ll be a hustle guy off the bench that will inspire the crowd and pump up his teammates. A broke man’s Tyler Hansbrough, he’ll do the dirty work, and he’ll be a sterling member of the community. However, he is not the answer to the Blazer’s frontcourt dilemma. A franchise center he is not.