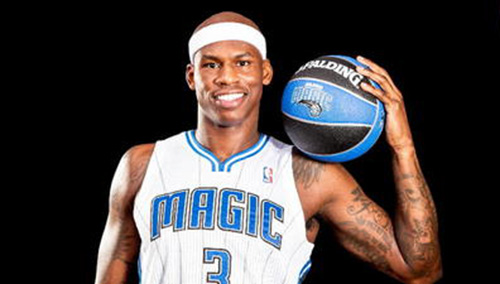 Al Harrington’s days with the Orlando Magic might be coming to an end. Reporter Alex Kennedy of HOOPSWORLD tweeted out the other day that the team was close to a buyout with the veteran forward. A fan asked Harrington, “What team do you play for now?” to which Harrington replied, “I’m about to be a free agent.”

The Magic acquired Harrington in the offseason trade that sent Dwight Howard to the Los Angeles Lakers, Andre Iguodala to the Denver Nuggets, Andrew Bynum to the Philadelphia 76ers and Harrington along with guards Arron Afflalo, Christian Eyenga, forwards Maurice Harkless, Josh McRoberts, center Nikola Vucevic and five draft picks to Orlando. The trade put Harrington on his seventh team in 15 years, and back onto a team in the early stages of a rebuild.

When he was traded, Harrington was recovering from offseason knee surgery to repair a torn meniscus, which he suffered in the Nuggets’ Game 7 loss to the Lakers in the first round of the 2012 NBA Playoffs. In the midst of his recovery, Harrington contracted a staph infection, which forced him into “multiple” operations on his right knee. While he hoped to miss just the preseason, Harrington ended up missing the first four months of the season, only appearing in ten games for the Magic.

In the ten games he played, Harrington looked sluggish and out of shape on the court, struggling to find his shot. Harrington finished the season with averages of 5.1 points and 2.7 rebounds per game, while shooting a woeful 35.1 percent from the field and only 26.7 percent from beyond the arc. The averages were his worst since his rookie campaign with the Indiana Pacers.

While Harrington was not able to contribute much on court, he did contribute off the court, good and bad. Harrington was the most seasoned player on the roster last year, which gave the young Magic men a good veteran presence in the locker room for a team that desperately needed it. On the flip side, Harrington did not come cheap to the team, paying him over $6.6 million this past season. The Magic forward currently has two years and roughly $14.8 million owed to him. The good news for the Magic is that his last two years are only half-guaranteed, so if they do buy him out, they will only take a cap hit of roughly $7.4 million. The team would only have to pay Harrington roughly $3.075 million this season and $3.3 million next season.

Even though Harrington did not play much last season, completing a buyout would be advantageous for the Magic’s future. For one, Harrington, 33, has no place in the long-term future of the team. When he was healthy enough to play, he took minutes away from young players. This would continue and hamper the development of the Magic’s key future pieces. The Magic have a handful of young players who can play the four, including Tobias Harris, last year’s first round pick Andrew Nicholson and this year’s second round selection Romero Osby. Buying out Harrington allows those players to get minutes and continue to grow.

Buying out Harrington would also allow the Magic to have another roster spot open to look at young players who could help the team for the future. The Magic currently has one roster spot open, and with the buyouts of Harrington and fellow forward, Hedo Turkoglu on the horizon, the Magic can continue their youth movement. The team is in dire need of not only depth at point guard, but also could use another back up small forward or center.