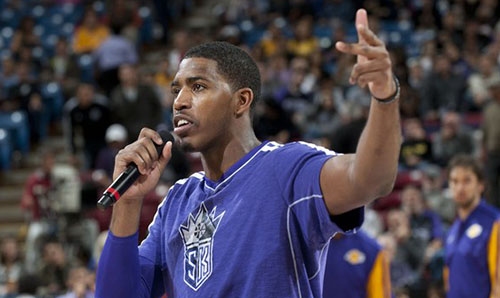 Usually an NBA team cannot get enough solid big men. That’s not the case for the Sacramento Kings, who are overloaded at the power forward position. The Kings have three talented, yet differently skilled power forwards that will be battling for the starting spot next to DeMarcus Cousins this fall: Jason Thompson, Carl Landry and Patrick Patterson. All have attributes that make them a great match next to Cousins, but also have attributes that make them less-than-ideal fits.

First let’s look at the incumbent starter, Jason Thompson. Thompson is a prime example of a “Jack of all trades” kind of player. He is extremely solid at most aspects of the game, but he is a master at none. At 6’11” and 250 pounds, he more than has the size to play the position. Thompson is the type of player that could slide into any lineup and make a contribution. Two things may get in the way of him winning the starting job: his lack of a shooting touch from three-point range and the fact that he can play both the 4 and the 5. Due to his versatility, coach Mike Malone could opt to have Thompson come off the bench to spell both starting big men.

After a solid year with the Golden State Warriors, Carl Landry signed a four-year, $26 million deal to return to the Kings. Landry is arguably the most talented player out of the three and is definitely the best scorer. He has some killer post moves that will force opposing defenders to honor him and is the definition of a professional, which could aid in keeping Cousins’s emotions in check. But Landry may not win the starting position he is a below-average rebounder and needs the ball to be effective. As the center, Cousins is going to need to be the scorer in the frontcourt. Landry has been most effective as a power forward off the bench throughout his career because he can overmatch opposing reserves.

The final option is Patrick Patterson. The thing that Patterson does that the other two cannot is stretch the floor past the three-point line. With Cousins clogging the middle this is incredibly important. His biggest knock is that he, like Landry, is not a very good rebounder and an average defender at best. The rebounding issue may be negated because with Patterson bringing his man out to the perimeter, that is one less man that Cousins has to compete with for boards.

The Kings have three power forwards who could easily slide into the starting spot. Thompson has the all-around skills and the defense, Landry has the attitude to keep Cousins’s head on straight and Patterson has the ability to stretch the floor to open Cousins up more in the post. For the record, my opinion is that Patterson will start with Landry backing him up and being the primary post scorer when Cousins is out of the game, with Thompson getting the lion’s share of the backup center minutes. But once again, who knows how it will turn out?