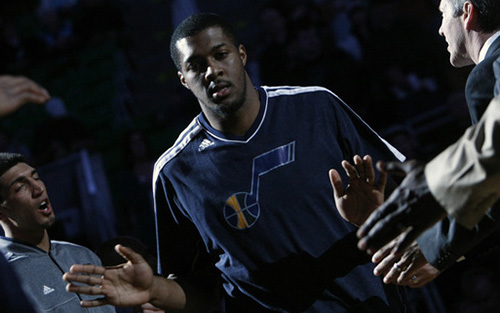 These four big men made a leap in fantasy basketball production during the 2012-13 season. This coming campaign, they’re expected to build on that jump in performance, so get ready to draft them much higher than their average draft position (ADP) before the season began last year.

In 2011-12, Vucevic had a fairly quiet, even negligible, fantasy season during his rookie year. He was then thrown in as part of the Philadelphia 76ers’ end of the Dwight Howard multi-team deal. Orlando then decided to take a gamble and inserted the sophomore center into their young starting lineup. He started off promising, logging five double-doubles in his first ten games.

He really took things to another level when frontcourt partner Glen Davis went down for the season with a broken foot. Nikola was the only true big man the Magic had left and the team leaned on him. Vucevic stepped up. Post All-Star break, he averaged 14.6 points and 12.8 rebounds. He also showed his statistical explosive potential with a 25-21 game on March 6th and even hit 30-20 on April 10th. He showed consistency, finishing strong for the season and hit double-doubles in ALL of his games between March 30 to April 17.

His free-throw shooting leaves a bit to be desired, but at only 1.6 attempts per game, we can let it slide. We’d like to see more blocks in the future, but we can’t complain when it comes to the rebounding and field goal percentage departments.

I know what you’re worried about, Glen Davis’ return this 2013-14, but word is that Davis’ recovery is coming around slowly and he might not be ready for the season opener. Even if he does come back sooner rather than later, Big Baby will have to deal with some rust issues. Rest assured, Vucevic will likely have momentum on his side and Davis might just be the odd man out in Orlando’s frontcourt rotation.

Nikola is fully capable of averaging 15.4 pointsand 12.1 rebounds this season and would make a great pairing with Golden State’s David Lee in your fantasy draft if you wanted to go heavy on PTS, REB and FG% while punting BLK.

Sanders was left undrafted in a majority of fantasy basketball leagues in 2012-13. When he busted onto the scene in early November, managers scampered to grab him. He hit a lull in production mid-February when he went down due to an injury, but has been solid overall as a blocks specialist in fantasy, however, consider Sanders a four-cat player, able to contribute blocks and rebounds while preserving your team’s FG% and turnover totals.

One point of concern is the departure of Monta Ellis and Brandon Jennings from Milwaukee. Where is the team headed? Their new backcourt is composed of O.J. Mayo and Brandon Knight, low-end crappier versions of their predecessors. Milwaukee could be headed for a tanking type of season… whether they mean it or not.

Nonetheless, Sanders should get heavy minutes due to his defense and athleticism. That, and there really isn’t anyone the Bucks have upfront to fill his role. If you can squeeze 9.5 and 2.5 from Sanders, he’s worth that middle round steal. The problem is, you’re likely going to engage in a game of chicken with your fellow drafters come fantasy draft night, holding out as long as you can before grabbing him.

On the surface, Favors’ numbers last season don’t look too impressive, but that’s just an illusion. Don’t forget, Favors played behind both Al Jefferson and Paul Millsap in 2012-13. He was so promising that he even hurt Paul Millsap’s value. Now that both of those players are gone, expect the veil to be lifted. What do we mean? Here’s a little bit of perspective:

He brings steals aside from blocks to the table and that’s something I appreciate from a big man. Aside from Dwight Howard, few big men can average double digits in rebounding while contributing at least one steal and one block per game. Favors is steadily rising up the ADP charts with his expected statistical upsurge this coming season.

Everyone’s excited to see this guy just blow up this season. We were all enamored by his explosiveness, athleticism and sheer power last season. Coach Lawrence Frank was bringing him along slowly, but in those twenty minutes per game that Drummond was unleashed onto the court, it was all worth it.

While I’m on the real-life bandwagon of guys waiting to see him shatter his first backboard during a game, I am taking a prudent “wait-and-see” approach when it comes to Drummond this year.

Areas of concern are A) his poor free-throw shooting – we don’t want an unplanned poor man’s Dwight Howard on our hands do we? B) Detroit’s crowded frontcourt – Josh Smith’s addition is somewhat of a monkey wrench in the mix.

Regardless of how I personally feel about Drummond in fantasy, his stock is rising as each day passes. Demand is high as everyone seems to want a piece of Drummond this season. The question is, will people end up overpaying for his potential on draft day?

This post was originally published on Points in the Paint. Check it out for more fantasy basketball awesomeness!