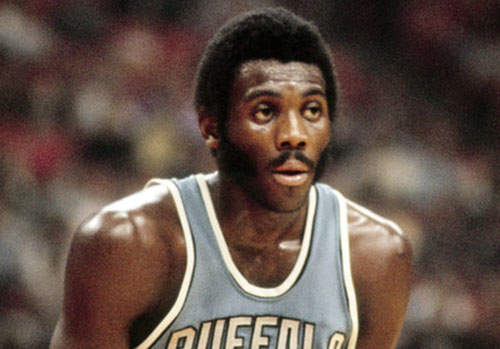 In a few short years, The Los Angeles Clippers have made the transition from league armpit to flamboyant rump-shaker, and in the historically infamous franchise quest to become one of the NBA elite – still, one void remains. The Clippers are one of a small fraternity of teams that don’t have any retired jerseys hanging from the rafters. Here’s a quick list of retired players whom the Clippers need to send their jerseys above the cheap seats.

1. Bob McAdoo – #11
Big Bob McAdoo was drafted by the Buffalo Braves second overall in the 1972 NBA Draft. In his tenure with the Braves, McAdoo averaged 28 points, 13 rebounds, three assists and 2.5 blocks. He had three 2,000-point seasons, won NBA Rookie of the Year, an MVP award and led the Braves to the playoffs three of four years he was there. McAdoo was elected to the Hall of Fame in 2000 and leads the crop as the most decorated player in Clippers franchise history. Let us bow our heads in silence for those stats.

2. Randy Smith – #9
As the 104th pick (7th round) with the Braves, the undersized power forward had a 17 point average, served as a two-time All-Star, and in seven seasons with the Braves, served as the franchise leader in minutes and games played, assists, steals and points. Smith also held the NBA Iron Man throne before AC Green, beating Johnny Kerr for 845 consecutive games played. Is it just me or were guys built tougher back in the day?

3. Danny Manning #25/#5
Coming off an NCAA championship with the Kansas Jayhawks, the Clippers selected Manning as the 1st pick in the 1988 NBA Draft. In six years with the club, Manning was a two-time All-Star and NBA Sixth Man of the year winner for the 1997-98 season. Eventually Manning’s knees slowed down the versatile power forward whom as a career 14 PPG scorer was known for his quickness and ability to handle the ball.

4. Corey Maggette – #50
So he’s not retired… yet. Maggette spent seven seasons wooing Clipper fans with consistency over flash. He had an uncanny ability to get to the free-throw line, and held his end of the bargain there leading the league in free throws made and attempted in the 2003-04 season. Injuries plagued the powerful small forward who is now a shell of his former self – the athletic swingman who posted career averages of 16 points and five rebounds.

5. Ron Harper – #4
Ron Harper made this list simply because of his expressed interest in his old #4 jersey being lifted into the Staples Center sky. In his four years with the Clippers, he had impressive consecutive season point totals: 1,495 (1991-92), 1,443 (1992-93) and 1,508 (1993-94). He was also a member of the 1992 playoff ball club who battled the Utah Jazz at the Anaheim pond due to the Los Angeles Riots. Cheers to you for your interest Ron (and I’m gunning for you), but Baron Davis has a better shot at Clipper jersey retirement than you. Good luck in getting #9 hung in the United Center (before Derrick Rose).