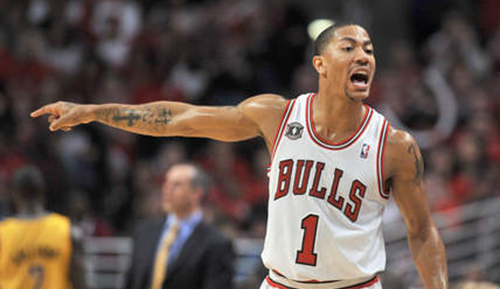 On October 29, 2013, the NBA season shall begin with a much-anticipated matchup: the Miami Heat vs. the Chicago Bulls. It’s also the date of the return of Derrick Rose and the death of another go-to NBA meme. The last time we saw D-Rose in action was Game 1 of a first-round series with the Philadelphia 76ers in the 2012 NBA Playoffs, where he put up 23 points, snatched nine rebounds and dished out nine dimes. Well, plenty has changed since April 28, 2012.

Last year, the Chicago Bulls finished with a 45-37 record, good enough for fifth in the Eastern Conference. This year, fans are gushing in anticipation for the Bulls to go for blood, particularly that of the Miami Heat. Plenty of fans want them to stop the Heat rampage, but is it possible?

Chicago’s defensive-minded coach, Tom Thibodeau, is one of the best in the league and has led the Bulls to the best record in the Eastern Conference twice. Their team is still very much a solid group of determined individuals, with Joakim Noah, Carlos Boozer and Luol Deng as quality role-players surrounding D-Rose. Noah was particularly impressive last season, clocking in averages of 11.9 points, 11.1 rebounds and 2.1 blocks per game. Those averages are the highest in the blue-collar player’s career. It’s fairly safe to say he’s one of the best centers in the league. Deng should fit right back in to his more natural supporting role this season.

The Bulls also discovered an X-factor on their team: Jimmy Butler. He came into the spotlight last season and impressed with his versatility and defensive abilities. The shooting guard/small forward clamped down effectively on many players from Deron Williams to LeBron James. Butler held opposing shooting guards to a PER of 7.0, according to 82games.com. He fills the 2 spot well, and definitely complements the Bulls style of aggressive, suffocating defense. Oh, and he also shot 47.5% from beyond the arc after last year’s All-Star break, and showed us that he can throw down some monstrous jams. He’s expected to start at the 2 spot, making for a strong backcourt with Rose.

With their former MVP back in the lineup, the Bulls have a man to orchestrate the fast break, a go-to guy for clutch shots, and a leader to carry the load when the going gets tough. He’s definitely going to come back with some rust, but after a couple months we should see an evolved version of Rose. Coach Thibodeau recently visited Rose in L.A. to watch a workout and was very impressed. Some of the weapons Rose has added to his arsenal are a jumper with more range and a left-handed floater. The kid still seems hungrier than ever to taste championship gold. After all the jokes and the media criticizing his decision to sit out longer than expected last season, and the massive itch he’s built up while sitting out, D-Rose should be out for vengeance to claw his way to the top.

So, what’s holding Chicago back? The Bulls have been plagued with injuries the past few seasons. Hopefully they’ll keep their main players fresh with the help of their bench. Kirk Hinrich should be a solid backup point guard for Rose, and Taj Gibson should be able to bring energy off the bench. The team also added Mike Dunleavy to their roster, who is a solid three-point shooter and scorer.

The Eastern Conference looks pretty tough this year with the Brooklyn Nets, New York Knicks, Indiana Pacers and the reigning champs. The Bulls seem to have everything lined up for a good shot at the gold, but we won’t know for sure until the moment becomes the moment. October 29, 2013, can’t come soon enough. At least NBA 2K14 is less than a month away!