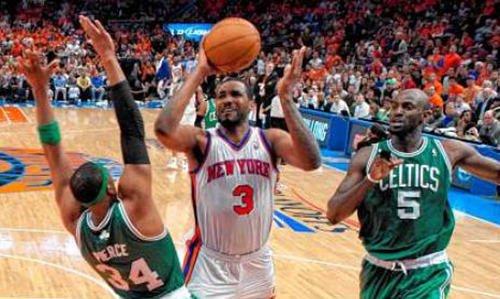 First of all, excuse me while I lament the fact that Sasha Vujacic is officially off of the Los Angeles Lakers’ radar…

Okay, now that that’s out of the way; last week the team signed forward Shawne Williams and guard Xavier Henry, bringing their roster to 15 players. Chances are that Coach Mike D’Antoni won’t play either of them very much, since he’ll only rotate eight or nine players (again wasting the talent of seven good players who are just sitting on the bench), but the organization felt the need to go with these last two anyway.

Williams likely won’t see much playing time, based on his recent performance. He was drafted in 2006, but wasn’t signed by anyone last season. However, when he was in the NBA, Williams spent some time with the New York Knicks playing for — drumroll please —  D’Antoni. That was Williams’ best NBA season, which you can compare:

As for Henry, he’s been in the NBA since 2010, and he entered the league after a short time at Kansas. He was drafted by the Memphis Grizzlies in the first round.

This guard will likely be of more use to the Los Angeles Lakers than Williams, since he’s known for being decent at both ends of the floor and the Lakers need all of the help that they can get on defense when the starters sit down to rest.

LakersNation.com did a poll on their site and 65 percent of people have said that they want Henry to play over Williams (though, this could partially be due to the fact that Williams is a D’Antoni guy, and fans are generally not very keen on the coach).

They both play roughly the same positions (Williams is 6’9” and is a pretty pure forward, Henry is a 6’6” swingman), but everyone saw last season that D’Antoni will literally wait around all season for a guy if he’s one of “his” players.

Neither of these guys will be the answer to the question of a Lakers championship, but they’re not bad pickups either.