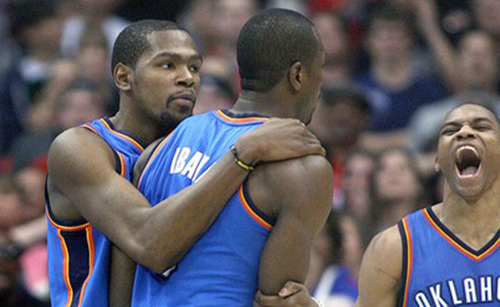 The end of today’s NBA Fandom Games elimination will mark the exact halfway point, 15 teams for whom one mercenary fan will not be rooting, and 15 potential winners still standing. Some eliminations have been foregone conclusions (Philadelphia 76ers, Phoenix Suns), others perhaps more unexpected (Golden State Warriors, Houston Rockets), and one long-overdue retribution for season after season of what can only be understood as outright contempt for a passionate and masochistic fan base (New York Knicks).

More and more, the Fandom Games will be forced to bid adieu to teams that are well-regarded by casual fans and might as early as next year find themselves back near the top of the pile. Today’s elimination, the Oklahoma City Thunder, was just a year or so ago America’s beloved underdog in their championship battle against the villainous Miami Heat. The 14 or so months since they lost that encounter have not been kind to the Thunder, and they now find themselves flailing a bit, both materially in the NBA’s Western Conference and existentially in the Fandom Games.

The basketball-viewing public savaged the James Harden trade of 2012 when it was first announced, and roughly every day since, and so that dead horse is pretty well beaten. But even post-Harden, the Thunder’s road has been bumpy: Russell Westbrook’s season-ending injury in the 2013 playoffs exposed a troubling lack of depth, Kevin Martin (probably OKC’s best bit of compensation for Harden) left this summer for the Minnesota Timberwolves with no real payoff, and the team has largely struck out on free-agent additions. Behind what is undoubtedly one of the NBA’s best Big Threes, the Thunder find themselves a troublingly weak squad.

The new meaning of The Oklahoma City Model, less romantic and more pragmatic than the original tanking-for-the-stars prototype favored by sterile general managers, is becoming this: lock two stars into top-tier contracts, a third borderline star into a slightly lesser deal, and surround them with role-players on rookie deals, veteran minimums and, depending on the depth of the owner’s pockets, maybe some mid-sized veteran contracts. This will be the approach favored by the bulk of NBA teams by the time the next lockout rolls around, excluding the exceptionally wealthy (Brooklyn Nets, the Knicks) and the just-getting-by (Milwaukee Bucks, the Suns).

The NBA has historically been rooted in talent procurement and talent management. A favorite anecdote, in many ways true, is that the only road to the championship is paved with the league’s best players. But unlike previously, when franchises like the Boston Celtics and Los Angeles Lakers could hoard the league’s elite talent and dominate for decades at a time, the financial structure of the NBA now requires a more thoughtful approach to creating a championship structure. Procuring and keeping talent requires levels of strategy unlike anything else in the league’s history. And in this regard the Oklahoma City Thunder are wildly ahead of the curve.

But by virtue of being ahead of the curve, the Thunder are temporarily at a competitive disadvantage, as teams like the Miami Heat, the Knicks, the Nets, the Chicago Bulls and the Lakers are all still playing by the old rules. Some of these franchises are clearly more competitive than others, but they all represent an ability and willingness to postpone any meaningful adjustment to the NBA’s new hard realities, and therefore have an edge on the forward-thinking Thunder.

Perhaps one of the most exciting byproducts of The New Oklahoma City Model will be a renewed emphasis on issues more peripheral than superstar obtainment, at least on those teams that feel their cores are in place. Franchises will distinguish themselves with exceptional talent development, great trainers, and improved player relations. There should be more focus on becoming an ideal destination for all levels of NBA talent, and on knowing how to get the most out of that talent. The Development League will become an increasingly important tool. Key rotation players will be more inexperienced than ever, due to the need to get the most out of rookie-scale and minimum contracts.

Perhaps not so ironically, the Thunder’s own roster-building prototype, the San Antonio Spurs, has been way ahead on this one, revolving low-cost rotation players around their core trio for the past decade and, in the most recent example of their exceptional organizational aptitude, turning players like Gary Neal and Danny Green into crucial postseason contributors.

The degree to which the Thunder are able to emulate their spiritual forefathers in this regard will to a large degree dictate their success in coming seasons, particularly in the playoffs. Outside of the franchise’s bizarre fascinations with Kendrick Perkins and Derek Fisher, this is a supporting cast composed almost entirely of very young prospects, including an incredible seven players on rookie-scale contracts. Not one of these prospects is a sure thing, and their future capacity will be enabled to a large degree by the organization itself.

A healthy Kevin Durant and Westbrook duo guarantees a strong season for the Thunder, likely a division title, and possibly another run to the NBA Finals. Durant is one of the NBA’s most likable superstars. Perhaps the ticket is to replace Scott Brooks with a coach that gets more out of the team’s raw talent, but the coach is always an easy scapegoat. Either way, by virtue of their savvy the Oklahoma City Thunder have come to represent the most cynical aspects of the league’s new business model, a dynamic that is of some comfort but little inspiration for an increasingly alienated fan base.