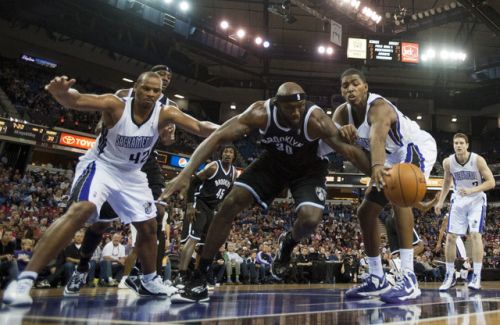 DeMarcus Cousins’ attitude needs to be revamped, but until then, it’s inevitable that his hot-headed, ignorant passion will lead to foul trouble and possibly suspensions. When these problems arise during the season, the Sacramento Kings will need to have a reliable backup center to bail them out when their best player is out of the game.

Being a team with little depth at nearly every position does not benefit the Kings in this situation, as they will likely struggle to find a backup they can bank on to match Cousins’ output while he is taking a rest. With Cousins averaging only 30.5 minutes per game, a big man with rebounding and scoring ability is a must to keep the team competitive without Cousins’ stellar all around play. With that said, the Kings do have a couple of options they can choose from to be the main backup for their star center.

Jason Thompson: Spelling Cousins will likely be one of Thompson’s responsibilities for the Kings, along with taking the reigns at the power forward position. Thompson can give Sacramento some strong minutes, offering a field goal percentage of 50.2 percent, which is the only area he had Cousins beat last season. His 10.9 points per game average indicates that decent offensive production can be counted on from Thompson. While his main focus will be on the power forward position, Thompson offers additional value for the Kings, as they will likely look to him to bail them out of situations in which Cousins is sitting out.

Chuck Hayes: I’ll start off by saying Hayes is the less promising of the two main options Sacramento has for backups at the center position. An aging Hayes can only offer Sacramento a few mediocre minutes of play, not enough to put this team in a position to challenge, dominate or be a real threat while he is on the floor. Lackluster scoring is a problem here, as Hayes’ 2.7 points per game doesn’t nearly match the stellar 17.1 points a night served up by Cousins. With legitimate three-point threats in Ben McLemore and Marcus Thornton, a strong post game is key for the Kings’ success, as floor spacing can make or break Sacramento’s three-point shooting. Hayes’ post game isn’t anything impressive, and much of the floor spacing created by Cousins will be non-existent once Hayes is swapped in, making it hard for the King’s shooters to get open looks and easy buckets.

Sacramento will likely look to Thompson to relieve Cousins. As for Hayes, a low number of minutes should be expected as he’s not really a viable option at center, a vital position for the Kings.

Tell us who you think should be the backup center to DeMarcus Cousins in the comment section below.