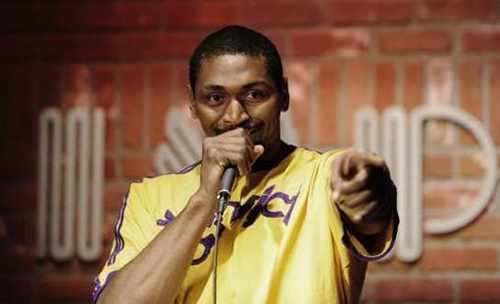 On Wednesday night, I had the privilege of attending Metta World Peace’s book signing in the TriBeCa Barnes and Noble. As you can imagine, there is much to discuss.  With this in mind, I have taken the liberty of dividing this post into sections so you can quickly and easily skip ahead to the good parts.

Gaining Access
I had been looking forward to the book signing for weeks, but were it not for a tweet from @MettaWorldPeace himself, I wouldn’t have even got in. Apparently the signing was like every other event worth going to and required a wristband, which could only be obtained by purchasing “Metta’s Bedtime Stories” prior to the 6pm start time. I rushed over to Barnes and Noble and was glad I got there when I did, because they only had several hundred copies left. Notice I did not use the word book in that sentence. The “collection of children’s stories” is about as thick as a dime and somehow managed to set me back twelve dollars. A small price to pay for entry into the World of Metta, but damn.

You know what, “Metta’s Bedtime Stories” definitely needs its own section…

Metta’s Bedtime Stories
To give you a better idea of how small this thing was, I was recently given a free copy of the publication “Awake!” by a Jehovah’s Witness that contained more content. Side note: Did you know that Halloween is actually a high holy day for Wiccans? But don’t fret, “families can enjoy good times without sharing in sinister celebrations.” Anyway, Metta’s book was weak, even by children’s book standards. The illustrations look like rejected animation cells from the Baby Einstein network, it contained advertisements (within the book!) for lesser books available at mcbridestories.com with titles like “Cool Like Lou,” “Aubrey’s Fitness Kids” and “Now I Know About Thinking Skills” and somehow referred to itself as an “NYC Edition” when nothing except the orange font on the cover suggested anything that could be considered regionally specific. It’s like buying an NYC edition of Monopoly where all the properties and pieces are the same, but on the front of the box there’s a speech bubble from the Monopoly guy that reads, “Stugotz!”

In the interest of being fair, I should acknowledge that some of Metta’s bedtime stories were legitimately inspired. My personal favorite was the tale entitled “Mud In My Bed,” which somehow was not about a little boy who pooped himself. He fell asleep with a chocolate bar in his bed, you see. I won’t insult your intelligence by explaining the moral of this sage and finely crafted parable.

Waiting For Metta
There was a long wait to gain access to Ron. Fortunately, my friend and I had some pretty choice line placement and were standing behind Paul Rudd the whole time. Obviously, it was entertaining, but not for the reasons you’d expect: he didn’t provide any insight into “Anchorman 2” or tout the benefits of sex panther.  No, all he did was deflect the increasingly awkward “Are you Paul Rudd?” picture requests from this obviously unbalanced girl who had cut in line ahead of us. It was a real treat to delight in someone else’s lack of social grace for a change and bask in a rare – albeit, irrational – sense of superiority.

Ever the showman, Metta kept the crowd entertained during their stint on the queue by holding an impromptu Q and A, giving one of the kids in attendance a microphone to walk amongst the crowd. I have included some of the highlights below, which were transcribed to the best of my ability:

Q: “Any thoughts or comments on last season with the Lakers?”
A: “It wasn’t a season, it was a disaster.”

Q: “Who is the most difficult player to guard in the NBA today.”
A: “Kobe.”

Q: “Would you rather be a lion or an octopus?”
A: “I’d want to be an octopus. That way I can harass sharks. I want to get a shark frustrated and see what he starts to do.”

Q: “What was your favorite game you ever played in.”
A: “Game 7. Kobe finally passed the ball.”

Q: “Do you regret the Malice in the Palace brawl?
A: “That fight was a cartoon. Just great technology. You young guys are good with technology, take that off YouTube.”

Meeting Metta
My friend had just gotten his “Mud In My Bed” page signed. The moment of truth was at hand. I approached the autograph table and watched as Metta signed my book, then put his arm around me to pose for a photo. I desperately scanned my brain for something intelligent to say, or at the very least a coherent question that could provoke an interesting response. The camera guy gave me back my phone. Only seconds left.

I’m not even sure he heard me. I could probably stand to learn something from crazy Paul Rudd girl.