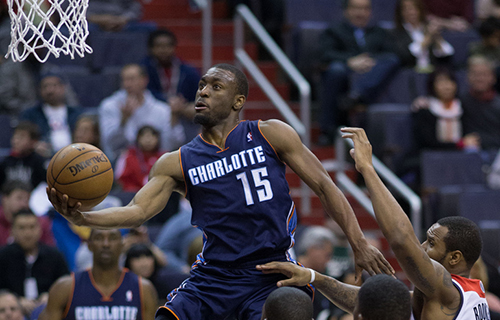 Over the past two seasons the Charlotte Bobcats have been the worst team in the NBA. One of the few bright spots has been the development of point guard Kemba Walker. He has been the leader of the team since he was drafted ninth overall in the 2011 draft. He has played in every game of his two-year career and plays with passion.

Walker had a solid rookie year, he averaged 12.1 points and 4.4 assist. He was selected to represent the Bobcats in the Rising Stars Challenge during All-Star Weekend. Although Walker had success his rookie year, he struggled at times. He shot a miserable 36.6 % from the field and 30.5 % from the three-point range. Walker who is listed at 6-1, had issues on defense as well. He wasn’t able to defend bigger guards and missed assignments.

Last season he looked more comfortable on the court as a result his production increased. Walker led the Bobcats in scoring and assists averaging 17.7 point 5.7 assist. His shooting percentages were better than in his rookie year. He shot 42.3% from the field and 32.2% three-point range. On defense, he raised played with intensity and positioned himself to become more effective defending larger guards. Also, he led the team in steals averaging 2.0 per game.

If Walker continues progressing the way he has, he will be in the conversation as one of the Eastern Conference’s elite point guards. He has a legitimate shot to represent the Bobcats in the All-Star game. He will have a lot of competition with Derrick Rose, Kyrie Irving, Rajon Rondo, Deron Williams and John Wall all being All-Star caliber guards in the Eastern Conference.

New Bobcats Head Coach Steve Clifford will find ways to effectively use Walker on offense. With Jefferson being one of the best big men in the NBA, Clifford will run the pick and roll. Walker makes good decisions with the basketball and will benefit from it. At times Clifford, will likely play back up point guard Ramon Session and Walker at the same time with Walker playing off the ball. This will give him more opportunities for spot up jump shots.

One thing that will work against Walker making the All-Star team is the Bobcats’ record. The Bobcats will be improved from a year ago, Walker may get snubbed for a player who has lower averages but plays on a winning team. Walker may not make the All-Star team this season, but he will make it hard to leave him out.