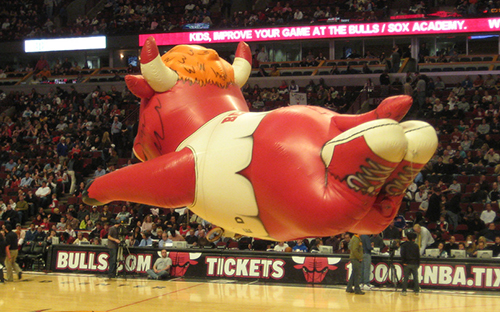 American tradition celebrates leaders who are bold risk takers, and their perceived success has historically been based almost entirely on the outcome of those risks. As our culture has evolved we’ve grown to cherish process, too, a genuine sign of maturity: we can control process, but can only influence outcomes, and shouldn’t the greater emphasis be on what we can control? The consequence of this is that bold risk taking is now often understood as reckless and unhinged while more careful and conservative leadership is regarded as the tactful and savvy approach.

This newfound appreciation for careful leadership is not yet honed enough for a collective recognition of the fine line between cautious wisdom and passive cowardice. Our culture has not yet had sufficient time to adapt to the new paradigm. It’s this dynamic that allows franchise leadership to adopt a strategy of deliberate failure with widespread fan support.

While this swing is indeed in the right direction, it inevitably has ushered in misperceptions and false ideas, as any cultural swing is wont to do. And as is always the case, the truth falls somewhere in the middle: bold risk taking has its place, and careful patience does, too. It’s about feeling the moment, knowing where the organization is in the context of the environment, understanding that a successful roster is a moving target, and having the vision to manage these changing dynamics in a way that is meaningful and most likely to yield success. Hiding out and playing it safe isn’t necessarily a meaningful path, and gambling big only to lose later isn’t, either.

But since the NBA blogosphere has adopted widespread praise for the game’s most cautious executives (Sam Hinkie, Danny Ferry), many who have accomplished very little but by virtue of their restraint have seemingly flawless records, the Fandom Games today will celebrate the NBA’s bolder leadership entities. Bold here does not refer to a leader such as, say, Isiah Thomas, whose “risks” were really some toxic combination of misguided and grandiose. No, this is a celebration of those leaders who took calculated risks because they dared to put themselves in a position to succeed, and it could’ve worked. Whether their decisions ultimately paid off or not is truly beside the point.

Let’s, for example, celebrate the bravery of the Los Angeles Lakers. Eyeing the impending end of Kobe Bryant’s career, the Lakers turned their most tradable asset into the NBA’s best center in a forward-thinking attempt to preserve the present and secure the future. Dwight Howard’s time in Los Angeles was an unmitigated catastrophe, undoubtedly, but in anticipation of the loss of Bryant, the Lakers made a move not only to survive but to thrive, a bold and meaningful attempt that, lest we forget, was universally praised at the time it was made.

The same goes for the New Orleans Pelicans, one of a handful of franchises with a pre-prime, bona fide superstar on their hands in Anthony Davis. The Pelicans chose not to bury their budding centerpiece under season upon season of futility and frustration but rather to give him teammates with whom he can battle, night in and night out. The Tyreke Evans contract and the Jrue Holiday trade were widely panned this summer, but think: when those contracts expire in 2017, Davis will be only 24 and will have spent the previous four seasons battling for playoff bids rather than toiling on miserable squads. A worthwhile gamble to groom a superstar.

Perhaps the boldest gamblers of the modern NBA are the Brooklyn Nets. It’s no mystery that the Nets rolled the dice big this summer, putting together what may amount to a one-season-only roster that is theoretically positioned to contend next spring. What’s bad to be said about the maneuvering of the Brooklyn Nets? A collective knee-jerk reaction against bloated salaries and luxury tax bills is inevitable, and maybe there’s some lack of foresight in Brooklyn, but are we really prepared to punish a team for seeing their shot at a ring and jumping at it?

So the Lakers, Pelicans, and Nets survive today, and the Dallas Mavericks too, for looking to build one last contender around Dirk Nowitzki, taking two respectable shots, and then standing by their guy when it didn’t work out.

The Memphis Grizzlies rolled the dice this year, too, albeit under questionable auspices. New ownership is typically eager to make its mark, understandably, but Robert Pera inherited a competitive, unorthodox, and wildly popular franchise. The move to shed Rudy Gay was somewhat understandable, the manipulation of the Lionel Hollins contract situation less so. But this edition of the Fandom Games is intended to honor the risk-taking leadership of the NBA, and there’s little doubt that Pera stuck his neck out to pursue his own championship vision, right or wrong. So the Grizzlies survive.

All three remaining teams have largely stood pat this summer, cautious conservatism from contending squads. The Chicago Bulls, Indiana Pacers, and San Antonio Spurs have seemingly determined that developing their existing rosters is preferable to a shake-up, and they might be right. But someone has to go, and it comes down to this: both the Spurs and the Pacers made very viable and heartening runs at the eventual champs this year, and fell just short. Their caution feels genuine. The Bulls, on the other hand, have a reputation for regular belt-tightening even on the cusp of contention, and with Luol Deng’s contract in its final year and Carlos Boozer remaining one of the game’s most overpaid players, one has to wonder whether a move was warranted here. And more importantly whether its absence was a competitive decision or a financial one.

The Bulls barely survived The Really Rich Guy Edition of the NBA Fandom Games. They aren’t so lucky today. This is one of the grittiest and most admirable squads in the NBA, one that battled its way to the second round of the playoffs despite the absence of its absolute best player, something few teams would be capable of doing. Unfortunately the organization’s leadership is simply too dark a cloud to chance it.