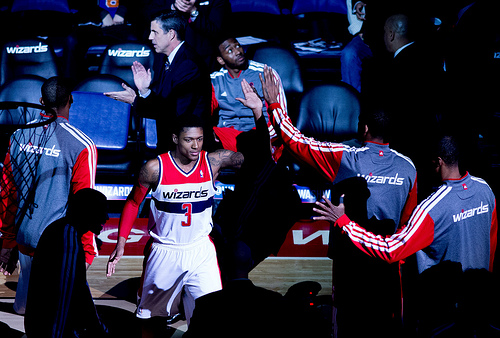 The Washington Wizards (2-3), fresh off Wednesday’s already somewhat crucial 116-102 road victory over the Philadelphia 76ers, made it two wins in a row with an enthralling overtime win against the Brooklyn Nets in front of 17,217 fans at the Verizon Center in Washington, D.C.

The Nets (2-3) started the stronger of the two teams, taking a lead tallying as high as 14 points during the first quarter. Brook Lopez exploited the Wizards weakness of defending the paint and finished the quarter with 14 points. Lopez’s subsequent absence throughout the rest of the game, finishing with 23 points, may have cost the Nets dearly as the Wizards held Kevin Garnett and Paul Pierce scoreless for the majority of the game. Garnett didn’t score until deep in the fourth quarter, finishing up with four points. Pierce had to wait even longer to find his name on the score sheet, also finishing with four points but with 8 rebounds.

After a franchise-high 18 three-pointers were made on Wednesday night, the Wiz again looked to outscore the opponent from outside the D and were thankful when Al Harrington was able to hit four three-pointers and contribute 15 points off the bench.

The backcourt pairing of Bradley Beal and John Wall very much seem to be enjoying a “husband and wife” role. If one seems to be slacking on the night, the other assumes the role of alpha male. Beal hit a game-high 29 points with three rebounds and two assists. Wall, who still has a lot to prove to be a real game changer, finished with 17 points that included eight free throws but more importantly contributed an essential 14 assists.

Nene, who missed two of the Wizards’ first three games due to injury, was arguably the team’s most valuable player on the night. With the Nets leading by as much as 11 during the fourth quarter, the power forward scored 12 of his 20 points in the period. With the Wizards down 99-97 with 1.9 left in the fourth quarter, Nene tipped John Wall’s wayward layup and forced the game to overtime. The Brazilian seems to be jelling well with Marcin “The Polish Hammer” Gortat, who again had a solid night both offensively and defensively, scoring 15 points and providing 12 rebounds.

Trevor Ariza, who this week has seen his name mentioned as potential trade bait, hit a go-ahead three-pointer with 40 seconds to go in overtime and the game was sealed by subsequent free throws by Wall and Beal.

The Wizards now face a tough three-game road trip to Oklahoma City, Dallas and San Antonio before returning to the Verizon Center to play the Cleveland Cavaliers. It is hard to wonder where the next win will come from after a thankless tough start to the regular season, but at least the Wizards are now able to provide some evidence that they may be the playoff team so many have tipped them to be.