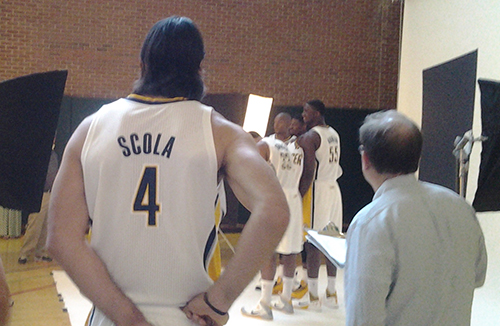 When I spent the afternoon at Media Day for the Indiana Pacers last month, there were a lot of empty seats in the room. That was the first thing I noticed about being there. The interviews had begun early and Hibbert was at the table. I stood in the back of the room and was awestruck at how “real” and “surreal” everything seemed all at once. But the lack of the room being full just kind of stuck with me.

Here they are eight games into the young season. Eight wins, mind you. Undefeated. Unblemished. After dispatching the Grizzlies, who traveled all the way up from Memphis to visit the Pacers at Bankers Life Field house, Indiana is now 8-0.

They did it with their defense which has been stellar since the first day of the season. They did it by limiting their turnovers to a mere 13, and they did it with Lance Stephenson (aka Metta World Peace on valium) recording his first triple double of his career with 13 points, 11 rebounds and 12 assists. It was an all around team effort on the part of the Blue and Gold last night.
Next up, after a four day layoff, are the Milwaukee Bucks – who face Miami and Orlando between now and their date with the Pacers at Bankers Life. OJ Mayo is playing well and Nate Wolters is averaging over 6 assists per game. They haven’t played exceptionally well as a team – winning only two games out of the five they have played, but they would be the Pacers first round opponent if the playoffs started today.

So now I look around, and the bandwagon seems to have left the station and it’s getting pretty full. I haven’t had the distinct pleasure of returning to the media room yet, but I can imagine that it’s full, too. An 8-0 start will do that for a franchise.

With the week off, for all intents and purposes, the Pacers can rest and take a look at what is undoubtedly a growing object of discussion – when does the streak end? The 1948-49 Washington Capitols started 15-0. (They had a 6′ 6” forward/center named Bones McKinney – how could a team not set a record with a guy named Bones on their team?) Is that record realistically achievable?

To accomplish that goal, if it is even a goal for the team itself, they would have to win on the road against Chicago, New York, and Boston in succession. That’s a tall order – which makes the feat even that much more notable. If they were able to get through those three land mines, there are other teams such as Minnesota at home in another 2 weeks. All told, if they could do it, it would be done against the Washington Wizards on Friday, November 29th, at home. There is some irony and symmetry in the fact of that team being the one the record could be broken against.

That’s a lot of “ifs” and as the streak continues, the bandwagon will have to add some extra seats along the way, even in the media room. After all, this is the team that came one game from the Finals last year. They have a 3 game lead in the Conference and 4 game lead in the Division, and the bandwagon continues to grow proportionally with their lead.