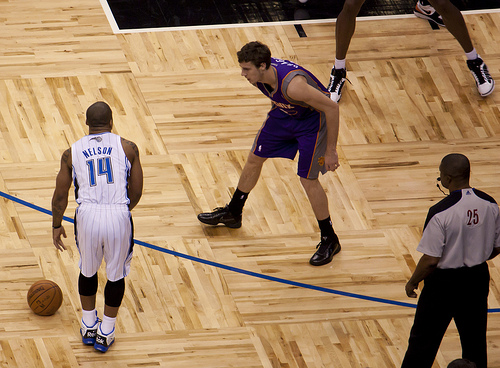 A night after a heartbreaking loss to the Miami Heat, the Orlando Magic returned home to take on the Phoenix Suns in hopes of getting back to the winning ways that have eluded them of late. However, the Suns had other plans, taking home the victory, winning 104-96. Phoenix had a balanced scoring attack all night, with five players finishing in double figures. Goran Dragic led the way for the Suns, finishing with a game-high 23 points and 13 assists. Gerald Green added 20 points, while the Morris twins, Marcus and Markieff, combined for 28 points and 13 rebounds off the bench.

The Magic struggled defensively throughout the night, giving up 11 three-point field goals and 18 fast break points to the young Suns team. Nikola Vucevic led the way for the Magic, earning his seventh double-double of the season, finishing with 20 points and 10 rebounds. Andrew Nicholson came off the bench and added 19 points and 8 rebounds, leading a bench unit that contributed well, scoring 34 points on the night. Jameer Nelson and Arron Afflalo joined the big-man duo in double-figures, finishing with 15 and 16 points, respectively.

A night after arguably his best game as a pro, rookie Victor Oladipo struggled yet again. Oladipo finished with 6 points, 5 rebounds and 5 assists, but couldn’t find his shot all night, going 3-of-12 from the field. After the game, Oladipo said: “Yeah, it’s tough. But we just have to learn from it.” Struggles are expected for the rookie, who is trying to learn a new position. However, seeing him contribute well for a multiple-game stretch could be huge for not only his confidence, but the team’s going forward. He will have another chance on Tuesday night when the team faces the Atlanta Hawks for the second time this season.

While his final stat line of 20 points and 10 boards may not jump out as “domination,” Nik Vucevic had his way most of the night offensively. From the opening tip, Vucevic was aggressive, attacking opposing center Miles Plulmee early and often. Vucevic scored in several of ways, showing off post moves as well as knocking down the mid-range jumper. Showing a varied offense is key for Vucevic going forward, as he will make himself harder to defend. The big night was a welcome sight for Vucevic and the Magic, after the big-man failed to record a double-double in the three previous games.

After a strong start to the season defensively, the Magic have slowly begun to fall back to the norm. The team gave up wide-open looks for most of the night, allowing the Suns to shoot 48.4 percent from the field, and knock down 11 three-pointers. The Suns shot only three free-throws overall, only making one. They became the first team since 1977 to make only one free throw and still win the game, when the New Orleans Jazz were 1-5 from the line and won 103-101. The Suns also had relative ease scoring in the paint, finishing with 42 points on 21-of-37 from the field.

For the first time all season, the Magic almost had their full complement of players. A night after Glen Davis returned from a foot injury, Tobias Harris returned from a sprained ankle that had kept him out since the preseason. The Magic were only without Kyle O’Quinn, who has missed the last four games with a sprained ankle. The Magic’s depth was tested some early in the season with only one true small forward on the roster. With the return of Harris, they can match-up better and rotate players in and out more frequently. Coach Jacque Vaughn will have his work cut out for him now because of this. He will undoubtedly have to try to balance minutes and find time to play all of his more-than-capable players throughout the rest of the season.

I asked coach Vaughn about Glen Davis’ return and how he thought Davis played on the second night of a back-to-back: “He gave us 21 minutes, I believe, and I thought his toughness was good for us. I think he demanded the ball in the post, which was good, got some fouls to get us in the bonus a little bit. Overall, it was a good test for him back-to-back and we will keep going from here.”

Coach Vaughn on Tobias Harris: “It’s good to have him back first of all, to get him back in the mix with the guys it’s going to take a little bit to make him totally comfortable. He has not played in a while and he has never played with Glen (Davis) before, so to be on the floor with Glen is going to take a little bit of getting back in the swing of things.” Vaughn also added that we will see Harris at both the small forward and power forward positions throughout the season.

Stat Of the Night

The Suns shot three free-throws and made only one. The last team to do so and win was the 1977 New Orleans Jazz, who beat the Houston Rockets 103-101. Pete Maravich was the player who made the only free throw that night.