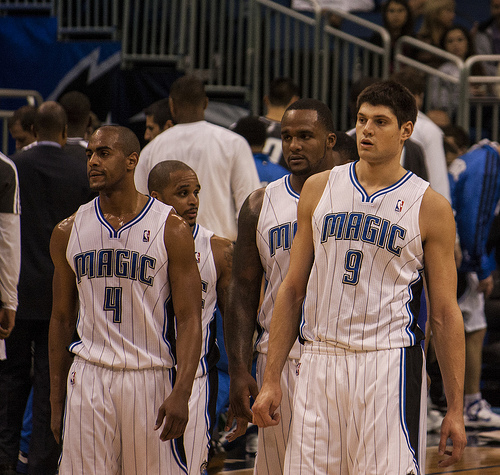 After starting the season with a slew of injuries, the Orlando Magic are nearing full strength for the first time in nearly a year. This past weekend saw the return of both Glen Davis and Tobias Harris to the line-up for the young Magic squad. Davis, who had been out since January with a broken foot that required two surgeries, played in both games of the team’s back-to-back against the Miami Heat and Phoenix Suns. Harris, who had been out since the preseason with a badly sprained ankle, played in only the second game against the Suns.

While their returns are important for the Magic, the team is still without second-year big man Kyle O’Quinn, who’s currently nursing a sprained ankle. When asked how his ankle was doing after the team’s loss to the Suns, O’Quinn said: “I can walk on it.” He later added it was getting better, but he and the team have no official timetable for his return to action.

What does this mean for the Magic though? How can Davis and Harris impact the team with their returns? How will O’Quinn fit in the picture once he’s back from his injury? Can coach Jacque Vaughn manage to balance the minutes for all of his players fairly?

Davis’ return gives the Magic one of their best players from last season. With Big Baby in the lineup, the Magic went 12-21 last season, compared to 8-41 without him. Davis finished last season with the best net rating of the team at -1.8, with the next closest player being J.J. Redick, whom the team moved at the trade deadline. The team’s defense struggled without Davis, finishing the season 25th in defensive rating, after hovering in the top 12 with Davis in the lineup.

On the court, Davis brings a level of physicality that the team might have missed early in the season. He works hard and is not afraid to dive for loose balls, as was evident in his return on Saturday night. Davis always seems to be in the right spot, whether it be offensively or defensively, and ready to work whenever his number is called.

While Davis’ and Harris’ returns are important to the team, they also add more depth to an an already deep and clogged frontcourt. When O’Quinn returns, coach Vaughn will have his work cut out even more. With seven players – Nikola Vucevic, Davis, Harris, O’Quinn, Andrew Nicholson, Jason Maxiell and Solomon Jones – all fighting for minutes, someone (or some people) will be forced to take a reduced role. In the two games Davis has played, Maxiell and Jones played a combined three minutes. While match-ups could dictate who plays and who does not, the odds are pointing towards that duo to see their playing time decrease.

The return of Harris, one of the team’s best scoring options, is a welcome sight to the team, who currently sit in a tie for 18th in offensive rating at 99.5. After he arrived from the Milwaukee Bucks at the trade deadline last season, Harris averaged 17.3 points and 8.5 rebounds per game while shooting 45.3% form the field. Per basketball reference, Harris has a 105 offensive rating and one offensive win share in his time with the team last season.

Harris is versatile, which will allow him to play both the small forward and power forward positions throughout the season. Coach Vaughn had this to say regarding Harris’ position going forward: “I think you will see him at both positions. It could be on different nights, match-up-wise. We will see how our rhythm is once we get everyone completely healthy, we will have to find a balance of both units and it could mean him playing the three or four.”

Both players will play important roles on the team, but what will they be? How can Vaughn maximize the talent he has on the team, while keeping everyone happy?