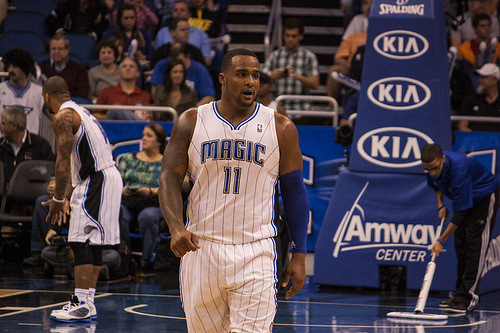 Meeting for the second time in a week, the Philadelphia 76ers were able to get revenge on the Orlando Magic, winning 126-125 in double overtime on Tuesday night. After a fast start, the Sixers faltered some, falling behind the Magic by five at the end of the first period. After the Magic lead grew to as much as nine, Philadelphia fought back and captured the lead for the majority of regulation, leading by as many as 11. A few late blunders saw the Magic claw their way back into it, forcing the game into overtime.

The teams traded buckets in overtime, with the biggest lead being five for Philadelphia. More miscues saw the Magic tie it up late, and an Evan Turner attempt at the buzzer fell short, sending the game into a second overtime period. Philadelphia grabbed the lead early in the second overtime period and didn’t look back. An Arron Afflalo three at the buzzer wasn’t enough as the Sixers took a one-point win.

Philadelphia was led by rookie Michael Carter-Williams, who impressed once again. Carter-Williams finished with his first career triple-double, notching 27 points, 12 rebounds and 10 assists. Thaddeus Young, Turner, Hollis Thompson, Spencer Hawes and James Anderson joined the rookie in double figures, finishing with 25, 24, 10, 17, and 19, respectively. The Sixers beat the Magic in most statistical categories, outshining 56-34 in rebounding, 11-6 from three-point range, 58-38 in the paint, 31-16 in second chance points and 18-11 in fast-break points.

Not to be outdone by fellow rookie Carter-Williams, Magic rookie guard Victor Oladipo notched his first career triple-double as well, finishing with career highs in points (27), rebounds (10), and assists (10). Along with Oladipo, guard Arron Afflalo and forward Glen Davis also enjoyed career nights. Afflalo scored a career-high 43 on 14-of-27 shooting, while Davis bounced back from his abysmal game in Washington, finishing with a career-high 33. Afflalo became the fifth player this season to score 40+ points and shoot 50+ percent from the field, joining Chris Paul, Paul George, Carmelo Anthony, and Kyrie Irving.

Big night after big night, Arron Afflalo continues to impress this season. A night after scoring 21 points in Washington, Afflalo bettered his career high with an efficient 43 points. Afflalo set his career high earlier in the season with a 36-point night against the Milwaukee Bucks, but was not going to be stopped on Tuesday night. From the start Afflalo was feeling it, scoring 18 points in the first half. His sizzling play has garnered attention from people leaguewide, and could lead to his first career All-Star selection.

For the first time in the history of the NBA, two rookies finished with triple-doubles in the same game. From the start, Victor Oladipo and Michael Carter-Williams were going after each other and exciting the crowd. Both players had career highs in rebounds, while Oladipo added career highs in both assists and points. The two battled it out for Eastern Conference Rookie of the Month honors, which Carter-Williams won. It was one of many exciting matchups on the night, and should be one to look forward to for years to come.

Without rebounding machine Nikola Vucevic, who was out due to a sprained ankle, the Magic struggled mightily, failing to box-out Philadelphia on multiple occasions. The Sixers had a 20-8 advantage on the offensive boards, which led to a 15-point advantage in second chance points. The four Magic big men that played combined for 10 rebounds, getting beat time after time. After rebounding the ball extremely well for the first two weeks of the season, the Magic have fallen to 17th in the league in total rebounding. It’s a simple task, but is something everyone must take seriously to be successful.

On a grueling second night of a back-to-back, only nine of the available 11 Magic players played. As the game wore on, it was evident players, especially Arron Afflalo, began to lose their legs. From lethargic plays to missed opens jumpers, the Magic’s tired legs began to show. With five of nine players playing over 38 minutes, coach Vaughn’s short rotations proved to be a big problem late for the team. It’s early in the season still, but injuries and short rotations could be the death of the Magic.

Stats of the Night

The Magic out-shot the Sixers, shooting 50 percent from the field compared to 47.9 percent for the Sixers.

Arron Afflalo raised his season average over a point to 22.5 points on the season.

The game was also Afflalo’s ninth career 30-point game, four of which have come this season.