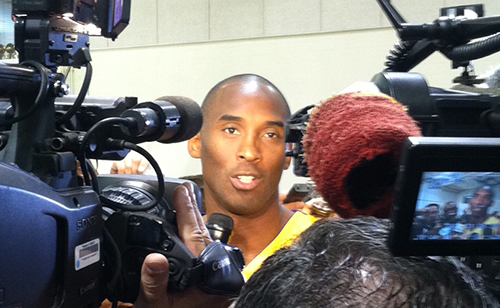 First, the good news: Kobe Bryant will return soon and be a Laker for life. We cannot understate the importance of either statement for the future of the Los Angeles Lakers franchise, their current season or the collective, beating heart of Lakers Nation. Our hero, our champion will soon fight again under our banner, and he shall remain there for the rest of his glorious, inevitable conquests.

It’s quite the narrative, right? Kobe’s coming back just in time, with the rest of the Lakers squad heating up, but still lacking the cohesion and stability that a field general brings. While skeptics doubted their abilities even with the Mamba, the Lakers are currently on track for a lower playoff seed and they can only get better with Kobe back in the lineup. What once was thought a lost season could be salvaged for a thrilling ride through the Western Conference playoffs, the only ceiling Kobe’s remaining capacity.

Like I said, quite the story. The problem is, it’ll likely stay in the realm of fantasy. With Pau Gasol’s struggles to contribute, coach Mike D’Antoni’s inability to riddle out the roster, the impending decrease in defensive rigor upon Kobe’s return, and the unproven records of all the key supporting players, even Kobe “5 RINGS” Bryant can’t turn this squad into a championship contender, no matter how miraculous his recovery. Realistically, we’re still looking at a first-round exit, maybe second if we get a favorable seeding. Not terrible, admirable even, but far from the annual franchise goal.

Even more troubling is our future. After the second Superman experiment failed and Dwight Howard left town, management decided to stand pat on premier talent and reload the team with role players and unknown commodities, preserving cap space for a splashy move next summer. Given the crop of free agents available, the strategy made sense, although Andre Iguodala would have been about as strong an upgrade as I can dream up. Maybe Pau stays on a priced-down veteran’s deal, or maybe he trots off for greener pastures. From the crop of young guns, we’d select the best four or five to continue the ride. After that, we sign one and a half, maybe two superstars, not quite max level contracts, but absolute and undeniable game changers.

Unfortunately, the potential magnitude of that last move, the status quo-shattering dual signing, has been crippled by the bloated whale of a contract the Mamba just hauled in, fresh from the hunt (and yes, in this oddly extended metaphor, snakes do in fact hunt seafaring mammals, particularly the big ones). Scheduled to make $24 million over two years, the first with a salary cap of $62 million, Kobe by himself takes up a third of the potential roster. When you throw in the fact that if the Lakers exceed the cap next season, they’ll fall victim to a vicious repeater tax, there’s no way that there’s enough space to reload for a legitimate title contender, barring some genius bargaining by GM Mitch Kupchak.

There’s no easy way out here, no simple solution. We’re caught between a hard contract and a limited free market, holding little to no trade chips and an aging core looking more and more ready for pasture. Even in the best case scenario, wherein the Jordans (Hill and Farmar), Xavier Henry and a few key role players stay on board to balance out the splashy signing of Carmelo Anthony, that team will not win a ring, not in today’s stacked NBA. Carmelo, Kobe, and change does not a contender make.

To keep up with the Miami Heat, Indiana Pacers, San Antonio Spurs and other league leaders, the Lakers need more than what Carmelo or some heavy hitter can bring, unless Kobe shocks us all and plays some of the best ball of his career. At this point, I wouldn’t be surprised if he did, given his history of overcoming any and every obstacle set before him. It’s how I want his career to end, in a last-minute blaze of glory, shooting into the sunset and taking one last victory lap to cement his legend. In recent interviews, Kobe reflected the same sentiment, placing his current goal at seven rings. The trouble is, his mammoth contract has threatened that dream from ever entering existence.

So yeah, I don’t know. Kobe could come back and wow us all and win another ring all by himself; he could return about where he was, middle around for a few seasons, chasing the scoring record, and retire with the same title count; or, worst case scenario, he could never regain his step or fall again to debilitating injury. I want the first option, but my rational mind fears the second—I won’t even consider the third. No matter what happens, I hope it’s a fitting end to one of the greatest careers this league has ever seen.

Before we close, I’d like to clarify something: I do not blame Kobe for his bloated albatross (I’ll throw one more animal in the mix, to fully muddy the metaphor) of a contract. Professional athletes have a limited window of guaranteed salary, so no matter the external considerations, I have no problem with a player earning what they can while they can. In a vacuum, Kobe is worth at least $30 or 40 million through promotional considerations alone. We’re not in a vacuum, however, the Lakers play in a league with a salary cap and little wiggle room. Management knew the reality and presented Kobe with the contract unprompted, not even beginning negotiations on a more reasonable sum.

As much as the pundits may want to blame Kobe for his cap omnipresence, the real responsibility lies at the feet of Jim Buss, Kupchak, and whoever else decided that they wouldn’t even try to play ball.

I’m hopeful for the Mamba’s return, but the future is marred by questionable management and an uncertain roster. With nothing to count on, everything to ask for, and the whole world watching, only one question remains: what will Kobe bring?