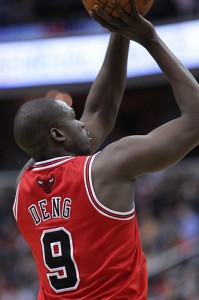 With Derrick Rose out, the Chicago Bulls need Luol Deng’s scoring and leadership to salvage the season.
Image coutesy of Kieth Allison.

Derrick Rose has fallen once again, leaving the Chicago Bulls without a go-to closer. Their core is still strong with Joakim Noah, Luol Deng, Carlos Boozer, and Jimmy Butler (when he gets healthy), but they still need some time to shake off the knee-buckling blow of Rose’s season-ending surgery. For the Bulls, everything’s up in the air, so the only thing to focus on is what’s happening now. They need a closer, and it seems that Deng is just the man for the job.

Deng has been quite impressive, stepping up his game since Rose made an early exit out of the season, averaging 27.4 points, 6.2 assists, and 6 rebounds per game in the last five contests. Indispensable is the only way to describe Deng. He’s never been known to create shots or be a one-on-one specialist; at the core, he’s an amazing all-around player, but not a natural closer. Deng has been missing crucial shots toward the end of games, and turning the ball over more than he wants to, but he’s up for the challenge of improving that facet of his game since opportunity came knocking.

“It’s something I haven’t done well with and something I have to really get better on,” Deng told the Chicago Tribune. “It’s a new experience, but I have to keep working on my game and when in a situation like that, be smart and make smart plays.”

When the Bulls are healthy, Deng is usually expected to be a lock-down defender and solid scorer on the other end. Now he has to take on the burden and opportunity to take the big shots. Deng is definitely an All-Star caliber player, and very capable of evolving into a closer. In the best case scenario, Deng can progress to become the essential secondary closer the Bulls have wanted that can take some of the pressure off of Rose. Of course, this is looking at the big picture when Rose returns completely healthy or with bionic knees or something to that effect. This is also assuming that Deng will be around when Rose returns. In that sense, maybe Rose’s injury was a blessing in disguise.

Deng has been a monster in the past several games, and he’s been doing most of his damage closer to the basket, shooting 58 percent in the key in his last 30 games. This season, he’s contributing 19.4 points per game, which is a career high so far. To go along with that he’s contributed 7.2 rebounds, 4.1 assists, and 1.1 steals per game. Besides his weak three-point shooting percentage and his lack of experience in being the go-to guy, Deng is a big factor in keeping the Bulls alive this season.

As for the Bulls keeping Deng, we’ll just have to wait and see. Deng has voiced his opinion to ESPN’s Chris Broussard about wanting to wear red for a while, stating, “I definitely want to stay here. I would love to play here my whole career.”

Many fans believe it’s going to be another hellish season for the Bulls, but maybe it will be a season for fans to witness Deng rise from the trial by fire.