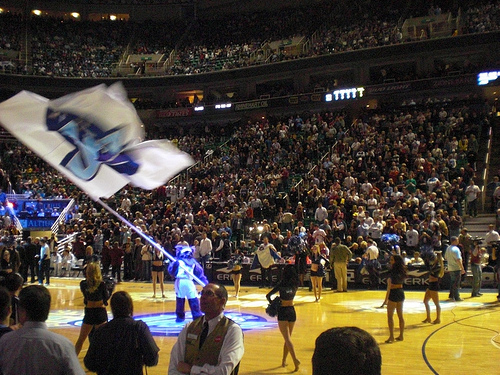 The Indiana Pacers seemed to sleepwalk through most of the game last night at the EnergySolutions Arena against the Utah Jazz. For the first three quarters the Jazz managed to hang around and make a game of it. Ultimately, however, the Pacers pulled away in the fourth with some timely defense, holding Utah to 19 points in the period, winning 95-86.

It was an off night for Paul George, two days removed from his 43-point performance against Portland. He netted 19 points on 7-of-20 shooting. George managed to make some clutch shots down the stretch and helped the Pacers to their 17th win of the season. Roy Hibbert fouled out of the game with about a minute left and the Pacers up by eight. He finished the night with a respectable 13 points and 9 rebounds, causing havoc for the Jazz down low most of the evening. Lance Stephenson showed up again after being AWOL the past two games and had a pretty strong night with 15 points on 6-of-11 shooting.

The blue and gold did get off to their now-routine slow start, trailing by as much as 11 in the first half to the team with the third-worst winning percentage in the entire league. Derrick Favors finished the game with 22 points and Enes Kanter with 20 as Utah dropped their seventh home loss of the young season. Butler alumnus Gordon Hayward had 12 points and 6 assists in the contest as well.

After the game both Roy Hibbert and Paul George noted that they were not feeling their best as they adjusted to the altitude and for George a cold really caused him to struggle with his breathing. He played 41 minutes last night, more than any other Pacer, and seemed to find his second wind in the pivotal fourth quarter.

Indiana now holds an eight-game lead in their division over second-place Detroit, and a two and a half-game lead in the conference over second place Miami. The next two games for the blue and gold are at the San Antonio Spurs and Oklahoma City Thunder in a back-to-back starting Saturday. They return home to play the Miami Heat in Bankers Life Fieldhouse on Tuesday next week. All told, the Pacers will have played the top four teams in the Western Conference and the second place team in the East in 10 days. They are currently 2-1 on this road trip headed into Saturday’s showdown at the Spurs.

One thing is for certain, they will have to play better on Saturday than they did last night if they hold any chance of winning.