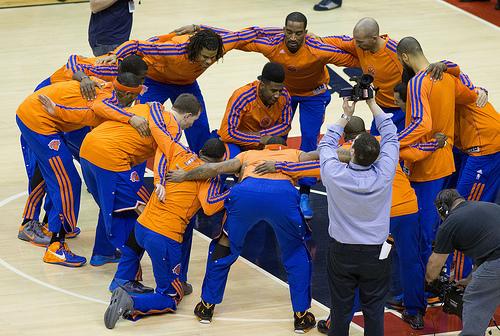 After blowing out the crosstown rival Brooklyn Nets the previous night, the New York Knicks returned home on Friday to take on the visiting Orlando Magic. Like Thursday’s game, the Knicks found success shooting the ball, blowing out the struggling Magic 121-83. The win was the Knicks’ seventh straight over the Magic, and their first back-to-back wins of the season.

After a slow start that saw them fall down 10 points, the Knicks rebounded quickly, carrying a five-point lead into halftime. After the half, the Knicks continued to build their lead, pushing it to 20 after three quarters. The Magic tried to cut into it in the fourth quarter, but were unsuccessful, falling down by as many as 41 before losing by a season-high 38.

The Knicks used hot shooting and a balanced scoring attack to dominate the Magic as every Knick that was active played and scored, led by Carmelo Anthony’s 20 points. Six other players—Andrea Bargnani (17), J.R. Smith (17), Tim Hardaway, Jr. (15), Raymond Felton (14), Metta World Peace (12) and Iman Shumpert (10)—finished in double figures. The Knicks were able to exploit matchup advantages against the Magic all night, seemingly winning every positional battle. New York knocked down a season-high 17 threes on the night, falling three shy of tying the team record.

Not many things went the Magic’s way. Arron Afflalo continued his torrid play, leading the team in scoring yet again with 20 points. Victor Oladipo built off his first career triple-double, finishing with 17 points, 9 rebounds and 3 assists on the night. Jameer Nelson, who missed the team’s previous three contests with a sprained foot, scored 13 points and dished out nine assists in his return to the court. However, no one else scored in double-figures for the Magic, with Andrew Nicholson leading the rest of the group with eight points.

Afflalo Plays Well Again
After setting a new career-high with 43 points on Tuesday night, Afflalo had another good game. Afflalo scored 20 or more for the third straight game and 11th time this season. He was given the tough task of guarding a bigger, more physical Carmelo Anthony, who was able to take Afflalo into the post and score in a multitude of ways. Afflalo’s continued hot play could be a good sign for the Magic if they decide to trade the shooting guard at some point this season.

Defense Nowhere To Be Found
After giving up 126 points in their double-overtime loss to the Philadelphia 76ers on Tuesday night, the Magic were looking for a bounce-back game defensively. Unfortunately for the Magic, they were dominated by the Knicks offense all night. The Knicks shot a scorching 53 percent from the field, including 50 percent from three. The Knicks’ ability to penetrate the Magic defense and kick out to open shooters propelled them as the Magic were unable to make adjustments and force the Knicks into tougher contested shots.

Magic Miss Nik Vucevic Again
For the second straight game, center Nikola Vucevic missed the game with a sprained left ankle suffered in Monday night’s loss to the Washington Wizards. Vucevic, the team’s only “true” center, was clearly missed on both ends again on Friday night. The Magic were out rebounded 45-31, and outscored 36-22 in the paint. Vucevic gives the Magic a true post presence offensively, and has shown an improvement in his passing early in this season. The Magic desperately need Vucevic to return, especially with Dwight Howard and the Houston Rockets next up on their road trip.

Stat of the Night
The two teams combined for 27 made three-point shots, which was just four off the NBA record of 31.

After the game I took to twitter and posed this question: “How can I recap this? Seriously.” What followed were two good responses.

First from @ChrisBarnewall “Say what they did bad, highlight some things, say what the Knicks did well, finish with ‘Now we will never speak of this again'”

Personally, I wanted to write “OH GOD THE BLOOD” and call it a day, but the Knicks played too well for me to do that.