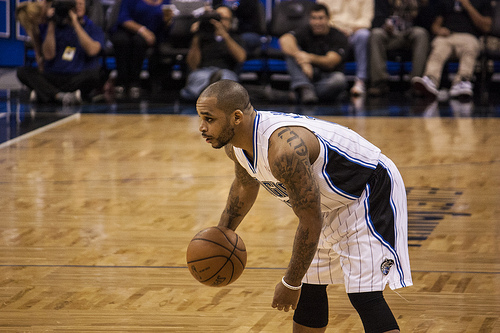 After a tough loss to the Golden State Warriors on Saturday night, the injured Memphis Grizzlies welcomed the struggling Orlando Magic to town. Monday night saw the Grizzlies get a positive outcome, beating the visitors 94-85. Memphis grabbed the lead early and never looked back, leading the lowly Magic by 23 at one point.

The Grizzlies saw a 21-point halftime lead dwindle to as few as 10 at the end of the third quarter, but a Jamaal Franklin buzzer-beating three took some air out of the Magic sails. Orlando fought and clawed their way back into it, cutting the lead to as few as four late in the game. However, three points from Zach Randolph stifled any hope the Magic had of completing the comeback and a three from Jerryd Bayless put the cherry on top of the Grizzlies’ hard-fought win.

Playing their fifth of six on the road, and second in as many nights, the Magic relied heavily on their starters. Arron Afflalo, Andrew Nicholson, Glen Davis, Victor Oladipo, and Jameer Nelson scored all but four points for the Magic on the night. Nicholson and Nelson led the team with 19 points each, while Afflalo added 17. Nicholson added a season high-tying 11 rebounds, while Davis, who left briefly with a knee contusion, added 16 points and 9 rebounds. Oladipo scored 10 points, but struggled to find his shooting stroke, going 4-for-11 on the night.

Magic Game Notes
Offense Starts Slow
Something that’s been a problem for the team recently has been their slow starts, which continued on Monday night. They scored a season-low 30 points in the first half and shot an abysmal 33.3 percent from the field. The ball was stagnant, with most possessions ending in isolations and missed shots. They dished out a mere four assists and failed to grab an offensive rebound. It’s worrisome for the team, but they were once again without center Nikola Vucevic, who makes the offense easier for everyone.

Magic Lose Rebounding Battle Again
22, 14, 17, 17 … the amount the Magic have lost the rebounding battles by in their last four games, all of which were played without Vucevic. Prior to his injury, Vucevic was sporting an 18.9 total rebounding percentage, per basketball reference, and ranked fifth in the league in rebounds per game, grabbing 10.9 per contest. There’s still no timetable for his return, but the Magic need to find some way to rebound the ball better while Vucevic is out.

Nicholson Shines
In a night that didn’t have many bright spots, Andrew Nicholson’s big night was a very bright one for the team. His 19 points, 11 rebounds, and 4 blocks propelled the Magic. While many of his teammates were struggling, Nicholson showed a calm and cool composure which helped him help pull the Magic back into it. The four blocks were a career high, and are another testament to the huge strides he’s made defensively this season.

Stats of the Night