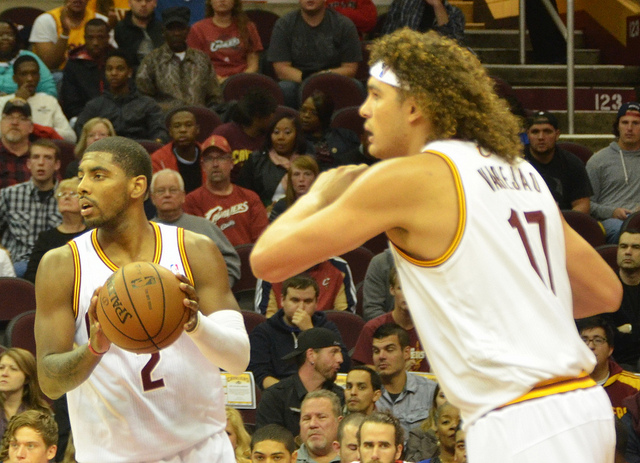 Returning home from a six-game road trip, the Orlando Magic welcomed the Cleveland Cavaliers to sunny Florida. The Magic were hoping to build off their win against the Charlotte Bobcats on Wednesday night, but the Cavaliers had other plans. After beating the New York Knicks on Tuesday, the Cavaliers took down the Magic 109-100 on Friday night.

The Magic started the game hot, grabbing a lead as big as 14 in the first quarter. However, the rest of the way was mostly Cleveland. The Cavs stormed back to take an 11-point lead late and never look back.

Cleveland was led by Kyrie Irving’s 31 points and 5 assists. Dion Waiters, who struggled early, caught fire late, scoring 16 of his 21 in the fourth quarter. To start the fourth quarter, Waiters scored or assisted on the Cavaliers’ first 17 points, which included a 14-0 run to take the lead for good. C.J. Miles and Anderson Varejao joined the two guards in double figures, scoring 10 each, while Varejao added a game-high 14 rebounds.

Orlando came out firing on all cylinders early, making shots, forcing turnovers and moving the basketball all over the court. Victor Oladipo had one of his best all-around games of the season, tying his career high with 26 points, while adding 3 rebounds, 5 assists, 4 steals and 3 blocks. Jameer Nelson and Arron Afflalo each had 17 on the night, while Andrew Nicholson notched a double-double off the bench, finishing with 12 points and 10 rebounds.

After missing all but one game in the regular season with a high ankle sprain, Tobias Harris returned Friday against the Cavaliers. Harris, who tried to return last month but re-aggravated the injury, scored 10 points and grabbed 5 rebounds in just under 15 minutes of action. Getting Harris back is big for the Magic. Not only do they get their leading scorer from last season, but also a guy who’s very versatile as he’s able to play both forward positions. How Harris will produce with the added players and the increase in production from Arron Afflalo is unknown, but one thing is for sure, it’s welcoming to see him back and ready to help the team.

Aside from a triple-double against the Philadelphia 76ers, Oladipo’s performance against Kyrie and the Cavaliers might be his best all season. From the start, the rookie was active on both ends of the floor, playing passing lanes, helping on defense, knocking down jumpers and bringing good energy early. It continued for Oladipo after halftime, where he went shot-for-shot with Kyrie in the third period. He continues to spew confidence and looks like a guy who could become a go-to scorer and a lockdown defender. His continued improvement is the biggest key for the Magic moving forward.

After combining for 29 points and 26 rebounds in Wednesday night’s win, Glen Davis and Nikola Vucevic both struggled against the Cavaliers. The duo combined for 12 points and 17 rebounds on a so-so 6-of-16 from the field. Neither big man was able to get a real rhythm going and looked frustrated on both ends. It’s a long season and games like this are expected from time to time, but the duo must rebound and have better games if they want to continue competing and winning.

After dominating the first half defensively, the Magic saw their defense falter down the stretch. While some of it can be attributed to the Cavaliers making shots, some of it is also on the Magic for sloppy and lackluster play. Cleveland was able to drive and find some open lanes late in the game, which forced the defense to collapse, leaving shooters open on the perimeter. The Magic struggled defending the paint in the second half, giving up 22 points compared to 14 in the first. The Cavaliers were also able to take care of the ball better in the second half, turning it over just twice, which limited the Magic’s chances of fast break points.

“He’s just getting better by the day. His ability to worry about today’s game is pretty impressive and to play against a high level backcourt like the Cavs’ backcourt, you’ve got to give Victor a lot of credit.”

Jacque Vaughn on the return of Tobias Harris:

The Magic had 17 first quarter fast break points, but only scored eight the rest of the night.