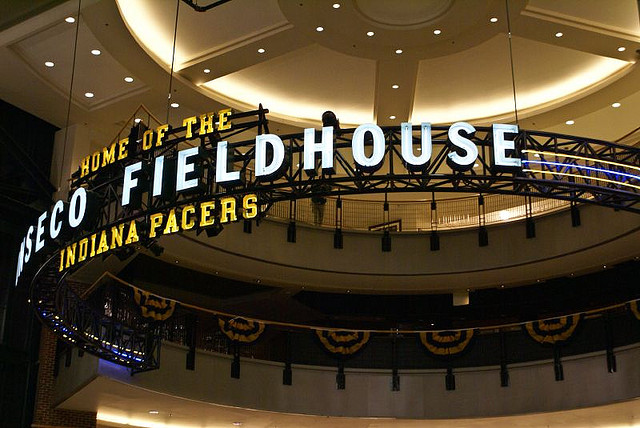 The Indiana Pacers struggled against the Charlotte Bobcats Friday night at Bankers Life Fieldhouse, but prevailed 99-94 with a defense that showed how to overcome some truly uninspired play. Offensively, they remained sharp, with all their key players performing well. It was the offensive performance that carried the team through nearly three quarters of truly abysmal defense. They were able to make some key stops at the end of the game to close it out.

The Pacers remained true to form as they struggled out of the gate against inferior talent, only leading by one at halftime, 56-55. Charlotte seemed to be able to score at will, in the lane, outside, or on the wings. It really didn’t matter. For the first half they shot 50 percent from the floor, with Kemba Walker leading the charge with 9 points and 4 rebounds. He finished the game with 13 points and 5 boards, and Al Jefferson finished with 21 points and 9 rebounds. Charlotte has the lowest shooting percentage of any team in the league, but the way they looked last night you’d think they were the best. They finished shooting just under 50 percent and nearly pulled off the upset on the road.

With seven minutes remaining, Indiana held a precarious five-point lead, 89-84, and the Pacers just could not seem to get over the hump. Charlotte continued to remain aggressive throughout the game, and when it looked like the Pacers were about to pull away, their aggressive play would reel Indiana back to within two. They were able to tie the game on several different occasions with less than five minutes.

There will always be games throughout the season that are an obvious struggle, when the things a team does really well just don’t seem to come so easily, and the opponent manages to play better-than-average ball themselves. That seems to be exactly what happened this night. But Lance Stephenson, who finished with 20 points and 11 rebounds, and David West, who finished with 14 points and 8 rebounds, made major contributions down the stretch.

This was an abnormal performance for Indiana. They just seemed lethargic and slow all night, with key minutes that they just didn’t seem interested in the game at all. The other interesting thing about the game is the 24 minutes that Rasual Butler played. Trying to look into the mind of coach Frank Vogel is very difficult. One could write it off to the imminent return of Danny Granger, but why would the coach take such a long look at someone who hasn’t played but 6:41 in the past five games? It was interesting, and he played well, but there are no real answers to his minutes tonight.

All in all, the Indiana Pacers cannot sleepwalk through Monday’s game with the Detroit Pistons or else they will have a blemish on their 11-0 home record. Every team seems to go through these types of games throughout the year from time to time. Let’s hope it’s an anomaly and not the start of a pattern.