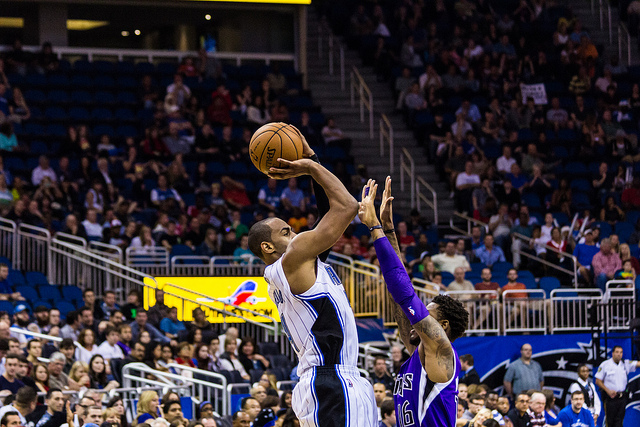 Falling down by 25 was just too much for the Orlando Magic on Monday night, as their rally fell short, losing to the visiting New York Knicks 103-98. It was the second meeting between the two this month, and the second win for the Knicks. This game, however, was much closer than the lopsided 38-point deficit would indicate.

After a scolding hot start that saw the team make 10 of its first 16 shots, the Magic cooled off drastically, falling to 41 percent at halftime. What doomed the hosting Magic was a second period that saw them score only 14 points, while the Knicks knocked down shot after shot, taking a 24-point lead into the half. The third quarter was a completely different story, however, with the Magic coming out hot, knocking down shots, and smothering the Knicks defensively.

Unfortunately for the Magic, their feverish comeback fell just short. They were never able to get over the hump after cutting the lead down to just one. While the Knicks struggles almost cost them the game, they were able to grind it out and make just enough shots in the second half to hold on.

Carmelo Anthony, who left in the third quarter with a sprained ankle and did not return, led the Knicks with 19 on the night. Shooting guard J.R. Smith poured in 18 points while grabbing 10 rebounds off the bench. Andrea Bargnani and Raymond Felton added 13 apiece, and bigs Tyson Chandler and Amar’e Stoudemire added 10 each. Chandler added a game-high 13 rebounds and terrorized the Magic defensively all night, altering shots and making it hard for the Magic to get good looks inside while in the game.

Orlando was yet again led by Arron Afflalo, who scored a game-high 26 points. Jameer Nelson flirted with a triple-double most of the night, finishing the game with 17 points, 10 assists and 8 rebounds. Fellow starters Glen Davis, Tobias Harris and Nikola Vucevic finished the game in double figures, adding 20, 14 and 14 each. Vucevic notched yet another double-double, grabbing a team-high 12 rebounds as well.

Arron Afflalo is the Magic’s best player. From scoring, to creating for himself and teammates, to crashing the boards, Afflalo has done it all. Monday night was another example of his high level of play this season, finishing with 26 points, five rebounds and five assists on 9-17 from the field. It was the fourth straight for Afflalo with 23 points or more and 12th time this season. At times he’s looked like the best 2-guard in the league, and if his play continues it will be nearly impossible to leave him off the All-Star roster in the East.

It’s been a problem for the team all season, struggling offensively and falling into holes they can’t dig themselves out of. Monday against the Knicks was yet another instance where a sluggish stretch early cost the team a chance at taking home a victory. Their inability to get into offensive sets and score at a consistent rate early, coupled with the Knicks’ efficient shooting, put the Magic in the hole deeper than even they could overcome.

Seven points, five rebounds, one assist, 3-of-12 from the field. The Magic’s bench was absolutely putrid. Outside of the minutes Jason Maxiell gave them midway through the fourth quarter, no one brought any energy whatsoever. It’s concerning for the young Magic that their bench was invisible and uninterested in the game. The season’s long and teams and players have nights where only the starters really produce, but this can’t become a typical thing for the young Magic.

The Magic came into the night ranked 25th in the league in opponent three-point shooting percentage. The first time they played New York, the Knicks’ ability to spread the floor and find open looks from deep propelled them to a season-high 17 makes from downtown. In the first half, the team knocked down 8 of 14 from beyond the arc and finished with 10 for the game. Whether it’s leaving guys open or just not contesting shots, the Magic’s struggles defending the three-point line is concerning and something the team must fix quick.

Jacque Vaughn on second half effort:

“I told the guys after the game that I’m not that good of a coach to dig a hole like that and try to fight out way back into the games continuously. What I do like, is the kind of frenetic and maniacal approach that we had in the second half which got us back into the game; two 19-point quarters and that’s with them making free throws at the end. We will continue to work, but the next step for us is being able to start the game and consistently play with that kind of frenetic effort.”

“I ask of the young guys when sometimes they play, sometimes they don’t play and tonight Jason was the prime example of being ready. We needed him in the fourth quarter and he came in and gave us great minutes whether it was drawing a foul, whether it was a good dunk in for us, I think overall setting good screens and being ready no matter whether it’s the first quarter or the fourth quarter, four minutes left in the game or the first four minutes of the game. You’ve got to be ready.”

“I think any fan could have given us a speech at halftime. It was just, are you going to show up to play or not? There’s not too much rah-rahing you can do when you’re down 24, you know what needs to be done.”