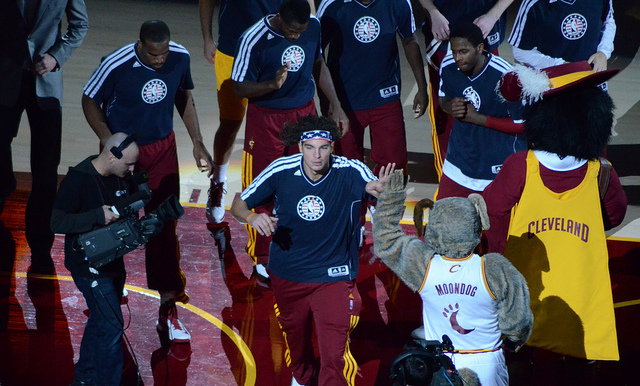 Coming off a loss to close out 2013, the Orlando Magic looked to right the ship Thursday night on the road against the Cleveland Cavaliers in Quicken Loans Arena. Both teams sat at 10 wins on the season coming into the game, so some team had to get their 11th win. This was not an easy feat for either squad, as the game went down to the wire in a slugfest. After an overtime period, the Cavaliers came out of this battle victorious, winning 87-81.

The main storyline in this game was the absence of a key player for each team: Nikola Vucevic for the Magic and Kyrie Irving for the Cleveland Cavaliers.

Vucevic was out with a sprained ankle that he suffered in the loss to the Golden State Warriors. This is the second time that he has had trouble with his ankle, after spraining it stepping on a cameraman’s foot earlier in the season, causing him to miss four games. In his absence, the team was out-rebounded by a total of 17 per game.

Last night, the Magic were out-rebounded once again, this time by 10 rebounds. If he misses more time due to the injury, this will continue to be an issue as the team moves forward, especially with an upcoming slate of games that includes the Miami Heat, Los Angeles Clippers and Portland Trail Blazers in their next three outings. The lack of a big man could come up big in both rim protection and on the glass. The trend of the Magic getting out-rebounded could continue going forward and fans would have to endure watching Jason Maxiell suit up as the starting center if Vucevic has to miss extended time. Maxiell played 43 minutes last night after logging just 33 minutes in the Magic’s last eight games combined.

This was Kyrie Irving’s first game missed after hearing a “pop” in his knee in the team’s last outing. Luckily for Irving and the Cavaliers, the injury was not as serious as a “pop” normally indicates and he was only afflicted with a sprained knee. However, the team missed Irving’s 22.2 PPG output, as Anderson Varejao led the team in scoring with only 18 points. Varejao capitalized on Vucevic’s absence, totaling 25 rebounds and accounting for nearly half of his team’s rebounds by himself. Both Varejao and Tristan Thompson logged double-doubles. Dion Waiters pitched in with 17 points off the bench.

Up by 10 with 1:34 remaining, the Magic lost the game on a feverish Cavaliers comeback. Cleveland capitalized on the Magic’s general ineptitude down the stretch that included missed shots, a five-second violation and a game-tying layup at the end of regulation. After the collapse, the Magic only scored two points in overtime, cementing the loss.

The Magic host the Miami Heat on Saturday at 7 p.m. EST in the Amway Center. For the Cavaliers, they also play Saturday, hitting the road to take on a Brooklyn Nets team coming off a last-second win against the Oklahoma City Thunder.